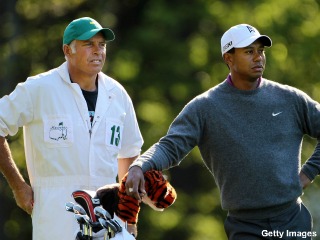 Months ago, when Tiger Woods decided to fire caddie Steve Williams after all the turmoil the two had gone through the previous 18 months, blame was tossed Tiger’s way. People didn’t understand how you could let go of such a loyal employee right when things seemed to be somewhat back to normal. Williams was obviously the victim.

But nearly three months ago, when Williams’ new boss, Adam Scott, torched Firestone, Steve let it be known that he wasn’t happy with Tiger, telling CBS that the Scott win was, “the best week of his life.” People questioned the comment considering Williams was on the bag for 13 of Tiger’s 14 major championships, and many saw it as a dig at Woods.

That might have been a paintball fight. What happened earlier this week in China was flat out gunfire, and it came at the hands of Williams. Asked to come on stage at a caddie dinner during the pre-tournament festivities at the HSBC Champions and tell the crowd what he was thinking during that now-infamous interview, Williams let out a crowd-silencing remark that can’t be viewed any other way but racist.

“My aim was to shove it right up that black —hole,” Williams said.

The remarks are obviously inappropriate on a ton of levels, but the timing is one of the more shocking things. Why would he still be hung up on this thing months later, after it seems he’s found a great player to work with? And why would he do this during a week that Scott is playing great golf, and has a chance to win this tournament?

Williams has since apologized for the remarks, saying on his website, “I apologize for comments I made last night at the Annual Caddy Awards dinner in Shanghai. Players and caddies look forward to this evening all year and the spirit is always joking and fun. I now realize how my comments could be construed as racist. However I assure you that was not my intent. I sincerely apologize to Tiger and anyone else I have offended,” but the damage has been done.

One of the keys to being a caddie is to never become the story, and Williams has been as much the story in golf the past three months as any player. He might still be upset about the abrupt firing, and frankly, most people are in this world when they get let go, but there is a way to exit with dignity and then there is this.

If I was Scott, I’d fire him right when the final putt drops this Sunday. Both Williams and Woods are expected to be at the Australian Open next week. With this looming larger than anything else, it seems like the right time to show the caddie that he is frankly that, just a caddie, and can’t be spitting out stuff like this and expect to get away with it.

It’s ridiculous, it’s stupid, and it really shows why Tiger might have let him go in the first place. We all know there are times for jokes, and you can take stuff out of context, but the racism line is a fine one, and this crossed it.