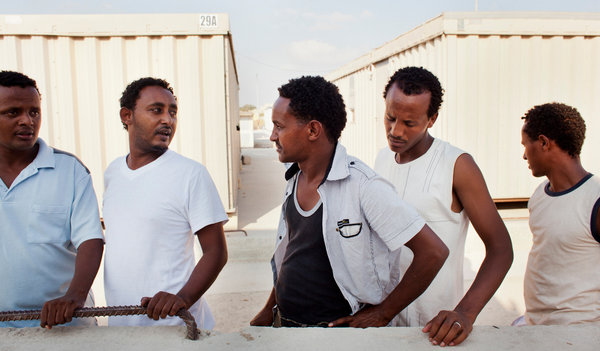 Ethiopian immigrants at a tent village in Malta, which leads the European Union in immigrants per capita. Under European rules, because the immigrants first landed on Malta, they are pretty much stuck here. More Photos »

VALLETTA, Malta — On a recent evening, the immigrants living in the steel shipping containers out by the abandoned airport here began to bed down for the night, pulling their mattresses outside to escape the suffocating heat.

Some had lived at this government-run “open center” for several years. Others had arrived more recently. Most shared a sense of defeat.

“Really, it’s very bad,” said a Somali man who gave his name as Z. Mohamed. He had fled war in Somalia, was imprisoned in Libya as he made his way north and now finds himself in this grim complex, with its communal water taps and bathrooms. “You can see with your eyes how it is and every week I go to the employment center for a job, but there is nothing. They never call.”

Perhaps nowhere are the consequences of the European Union’s one-size-fits-all immigration rules more apparent than here in Malta, a tiny archipelago in the Mediterranean between Libya and Italy, which now has the highest ratio of immigrants per capita of any European Union member. Many of its immigrants are caught in a limbo, unable to find jobs or afford housing — and unable to move off the island.

It’s not that Mr. Mohamed and the other new arrivals wanted to come to Malta. Most had never heard of the place until their flimsy boats foundered on the way to Italy, and the Maltese coast guard rescued them from the sea. For that they are grateful.

But now what, they ask. This densely populated nation, 400,000 people in an area a tenth the size of Rhode Island, has little to offer them. But under European rules, because they first landed here, they are pretty much stuck here.

Their fingerprints go into a databank, as they do for all immigrants that arrive in the European Union. If they manage to get to European mainland, and many do, they are quickly returned here.

Greece, too, is struggling under the rules. Thousands of immigrants keep arriving on its borders. But faced with a crushing financial crisis, it has few resources to deal with them. Its facilities are in such bad shape that last year the European Court of Human rights found that returning an asylum seeker to Greece violated his rights.

Malta’s numbers are much smaller, but so is its economy. The turmoil in Libya, Syria, Sudan and Somalia is producing a steady stream of refugees heading north. On a recent night, the Mediterranean yielded 168 more immigrants in two boats, 30 of them so sick from days at sea without food and water that the Maltese authorities took them immediately to the hospital. Government officials openly groaned at the thought of yet more needy immigrants.

“For us, 168 is the equivalent of thousands,” said Alexander Tortell, the director of Malta’s Agency for the Welfare of Asylum Seekers.

Malta does not even have the wherewithal to deport those who do not qualify for humanitarian protection. It does not have the network of consulate offices needed to negotiate repatriation treaties across Africa, let alone the budget to charter flights to take the immigrants back. So, the numbers continue to pile up here — more than 16,000 migrants in the last decade.

But even as Malta presses for the European Union to do more to share the cost of caring for refugees, it has faced criticism over the conditions immigrants face when they arrive. For one thing, officials routinely jail everyone who arrives by boat, in many cases for as long as 18 months, even though more than half will eventually be granted refugee or some lesser asylum status. A recent Human Rights Watch report pointed out that even minors were being jailed, thrown into an adult population until their age could be verified.

Advocates also complain that the detention policy criminalizes people who are very often running only from war or persecution. The immigrants are imprisoned in a collection of buildings, including two huge hangars, each holding about 300 people. In the summer, the temperatures inside soar. No matter what the season, the noise is deafening, advocates say, and hygiene poor.

Once released, they can move to “open centers” like the one where Mr. Mohamed lives.

“These are people who have been through a lot — war, some have been raped,” Katrine Camilleri, the director of the Jesuit Refugee Service in Malta, said. “And it is usually a terrible journey getting here, in which some of them lose their wives or husbands or children. You would imagine we could be a little more understanding.”

Some advocates point out that the detention policy itself is expensive. Maltese officials, however, cling to it, in part because they would soon be tossed out of office if they did not, experts here say. “There is a lot of support for the detention policy,” said Neil Falzon, the director of the Aditus Foundation, a human rights organization here. “The Maltese are not happy with unknown Africans left to run around.”

In June, an immigrant was beaten to death apparently as he tried to escape from detention; it was not the first allegation of brutality. Officials here say they would like to offer better conditions, but they are doing the best they can under the circumstances.

Until recently, Malta had little experience with boat people from the African continent. Government officials say there is no good explanation for why they began arriving here, though some link the increase to Malta’s entry into the European Union in 2004.

Malta has been asking for help for several years, and the European Union has offered some. Several hundred refugees have been relocated to the mainland, and the United States has also helped, relocating more than 1,000 families over the last five years. But the Maltese say they need more assistance.

They say the European Union’s current rules, known as the Dublin II accord, are unfair. They were drafted long before Malta even joined the bloc, and were focused on stopping immigrants from “asylum shopping” — drifting through Europe looking for whichever country might be most sympathetic to their claims. Changes to the rules are under debate, and experts say they are likely to include financing for countries that suddenly find themselves facing a wave of immigrants that threatens to overwhelm their resources.

But exactly how the system will work remains unclear. In the meantime, thousands of immigrants who landed on Malta have nowhere to go and few prospects. Those who get refugee status hope for relocation. Those who have been denied have fewer options.

Some immigrants do find work, though government officials acknowledge that they are easily exploited.

At Mellieha Bay, a resort town here, a dozen immigrants were working as beach boys, including Hass Mahamed Dalmar, 21, a Somali man who spent a year in detention. He tried once to move to Belgium but was returned to Malta and imprisoned for another six months. Like many of the other young men who live here, he eats from the fast food stands and sleeps on the beach chairs in the summer, sometimes earning $6.50 a day, sometimes $40. “We are here,” he said, “looking for a life.”

For black british actors, equality is a long way off