Sunderland defender Titus Bramble groped one woman’s bottom in a club before repeatedly sexually assaulting another in the back of a taxi, a court heard on Monday.

The 30-year-old denies four counts of sexual assault alleged to have happened during a night out in Yarm, Teesside, on September 28 last year. 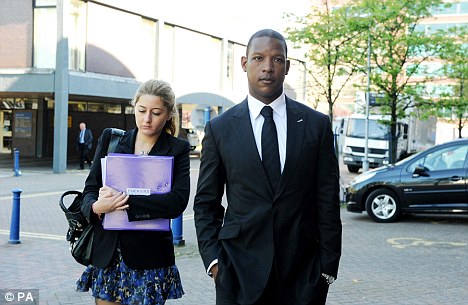 In the dock: Titus Bramble arriving at Teeside Crown Court on Monday

Shaun Dodds, prosecuting at Teesside Crown Court, said: ‘It is significant that we have here key witnesses who don’t know each other and are both making separate and independent allegations against this defendant’s sexual conduct in the early hours of September 28.’

The taxi driver was so concerned about the activity in the back of his cab he drove straight to a police station, the court heard.

The first complainant was in the Cross Keys bar in Yarm, which is a pub with a nightclub upstairs, the jury of seven women and five men heard.

She was standing near the bar at about 1am when someone squeezed her right buttock, Mr Dodds said.

When she turned round she saw a man smirking at her, and he was alone.

‘The Crown say it was this defendant,’ Mr Dodds said.

She told a male friend and he explained: ‘He plays for Sunderland Football Club,’ the prosecution said.

‘She didn’t know who he was. (She) said “I don’t care what he does, he is not grabbing my arse like that”.’ 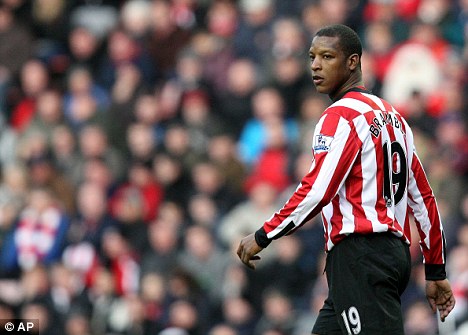 On trial: Sunderland’s defender is faced with four charges of sexual assault