Dontrell Melvin went missing more than a year ago when he was just 5 months old, but until this week, no one was even looking for him.
Not his father, who took the infant out of the house in July 2011 — and returned home without him.
Not his mother, who waited more than a year before alerting authorities her son had vanished.
And not child protection administrators, who received a call to their abuse hotline last fall relaying concerns about Dontrell’s welfare. The call was “screened out,” sources told The Miami Herald, meaning it was deemed unworthy of investigation. 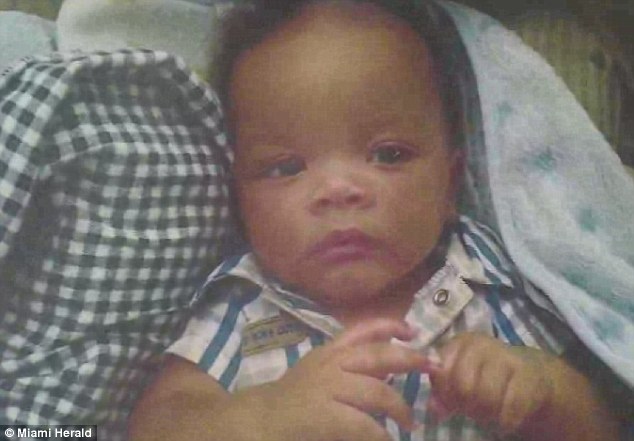 Missing: Dontrell Melvin, from Miami, was last seen when his father Calvin Melvin Jr took him out of the house in July 2011 when he was five months old and returned without him

Everyone’s looking now. On Thursday, Hallandale Beach police made a public plea for help in locating Dontrell — after a visit to the home by child protection investigators found two children where there should have been three.
Police released photos of Dontrell from July 2011, when he was less than half a year old. By now, he’d be nearly 2.
Police also showed photos of his father, Calvin Melvin Jr., 27. Officers had been in contact with Melvin, who agreed to meet with them only to duck the meeting.
By Thursday night, he had been located, and was at the police station.
Melvin is a “person of interest” in the child’s disappearance, said Police Chief Dwayne Flournoy.
“I believe this child is in danger,” Flournoy said.
The missing child saga shares similarities to the case of Rilya Wilson, who vanished from the home of her foster mother more than a decade ago but didn’t come to the attention of authorities for 18 months. 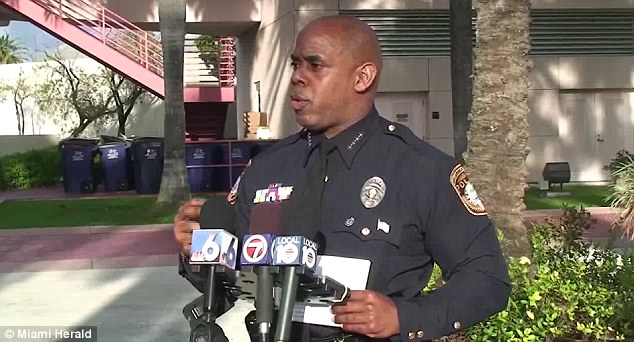 Hallandale Beach Police Department Chief Dwayne Fluornoy said: ‘The mother has given an indication that she hasn’t seen her child since July 2011, and she has questioned the father on numerous occasions as to the whereabouts of the child’

The difference that time: People thought she was OK because the case worker assigned to monitor Rilya’s wellbeing was doing nothing of the sort, while producing fake reports documenting phantom visits to the home. The foster mother is currently on trial for Rilya’s murder in Miami-Dade circuit court.
The last time anyone saw Dontrell was July 2011 — when his father walked out of his Hallandale Beach home with Dontrell and came back without him.
Dontrell’s mom asked what happened to their son. Melvin told her that he gave the baby to his parents in Pompano Beach so the boy could have a better life. The couple were having financial troubles.
Life went on without Dontrell.
The couple went on to have another child. The mother, who police did not identify Thursday, has a third child with a different father. 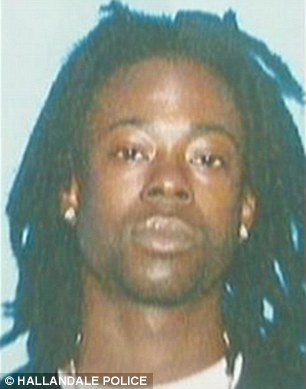 
Members of one neighborhood family said they would see Melvin now and again, and would ask him: How’s Dontrell doing?
Melvin’s response: “Oh, he’s alright.”
Months passed. The mother apparently accepted what Melvin told her — the boy was with his grandparents — and apparently didn’t delve too deeply into the situation..
“We can’t get over that fact either,” Maj. Thomas Honan said.
In October 2012, Hallandale Beach police caught a whiff of trouble. They received a report that the mother was having “custody issues” with Melvin. That report may have been in conjunction with a service call to the home in which cops responded to a fight between the parents.
A report generated at that time referenced the missing child, stating: “It is not known if the child is alive.”
The Broward Sheriff’s Office, which investigates abuse and neglect in Broward under contract with the Department of Children & Families, didn’t learn any of that because the report was “screened out” by DCF’s child abuse hotline, even though Dontrell’s extended family had previously been under the supervision of Broward’s privately run child welfare agency, ChildNet.
More months passed.
Dontrell returned to DCF’s radar Wednesday night after another call came into the child abuse hotline. As a result of that call, which was not “screened out,” a child protective investigator went to the family’s Hallandale Beach home — finding the two children instead of the expected three.
Melvin told the investigator that Dontrell was with his parents — the boy’s grandparents — in Pompano Beach. The investigator went to the Pompano Beach home of the grandparents. They said they hadn’t seen the boy in more than a year.
The investigator went back to Hallandale Beach to talk to Melvin.
Melvin was gone.
DCF declined to discuss the details of Dontrell’s disappearance and the agency’s actions.
Police said the rest of Dontrell’s family is cooperating.
“They want to find out what happened to the child,” Flournoy said.
Police are asking anyone who knows anything of Dontrell’s whereabouts to call 954-457-1400 or Broward County Crime Stoppers at 954-493-8477.
Read more here: http://www.miamiherald.com/2013/01/10/3176643/hallandale-beach-police-seek-father.html#storylink=cpy