In a tragic turn of events on the 10th anniversary of the most tragic day in New York City history, one of the top girls basketball prospects in the nation was gunned down in her Manhattan housing project in an incident that family members and friends contend was a horrific case of mistaken identity. 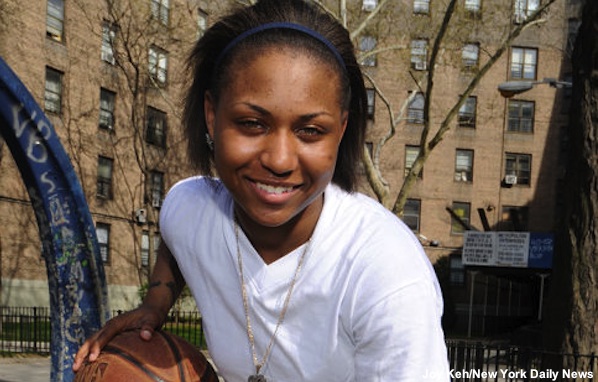 According to the New York Daily News, New York Post, ESPN New York and a variety of other sources, 18-year-old Tayshana Murphy (who was nicknamed Chicken), was shot and killed in Harlem’s Grant Houses housing project around 4:10 a.m. on Sunday morning. The Daily News reported that friends and at least one witness told officials that she was attempting to out run a gunman in a hallway of her building when she was killed.

Murphy, a 5-foot-6 senior at New York (N.Y.) Murry Bergtraum High, was considered one of the top guard prospects in the nation and had received recruiting interest from a variety of collegiate programs. The teen planned to use her basketball talents to improve her future and help her family leave the projects which eventually claimed her life.

Yet the circumstances around her shooting are so tragic and troubling that they may threaten to overshadow many of the accomplishments of her bright life. According to the Daily News, Murphy was wearing a hooded sweatshirt at a party with friends from her project when she was chased by the gunman in question. According to some who were at the party, Murphy was mistaken by her assailant “for a boy from the group who had fought with young men from a nearby housing project,” and she protested her innocence to the gunman.

“She was pleading for her life,” Teka Taylor, one of Murphy’s close friends, told the Daily News. “She was saying, ‘No, please, I don’t have nothing to do with it.'”

Murphy’s mother, Tephanie Holston, was interviewed hours after her daughter’s death wearing a shirt stained with blood from her daughter’s wounds. Still coming to grips with the full gravity of her loss, Holston told the Daily News just how important basketball was to her daughter.

“She said, ‘Mom, I’m going to get you out of the projects,’ ” said Murphy’s mother, Tephanie Holston, whose shirt was stained with blood after she tried to save her daughter before emergency workers arrived. “She loved basketball, she lived and breathed basketball,” Holston said.

Her coach said that his team would miss their would-be senior star even more than she could miss the game itself.

“It’s very devastating, it’s something you never want to deal with,” Murry Bergtraum girls basketball coach Ed Grezinsky told ESPN New York. “You deal with all kinds of things and adversity as a coach, injuries and all kinds of family issues, but something like this is beyond comprehension.