A woman who was allegedly raped by a high-risk sex offender in a popular New York City park has revealed how she pleaded with her attacker to let her go.

In a harrowing interview, the victim said she looked deep into her attacker’s eyes and begged him to stop.

It has also emerged that suspect Jonathan Stewart, who was arrested nearby, attempted suicide in the lockup at Manhattan Criminal Court as he waited to face charges. 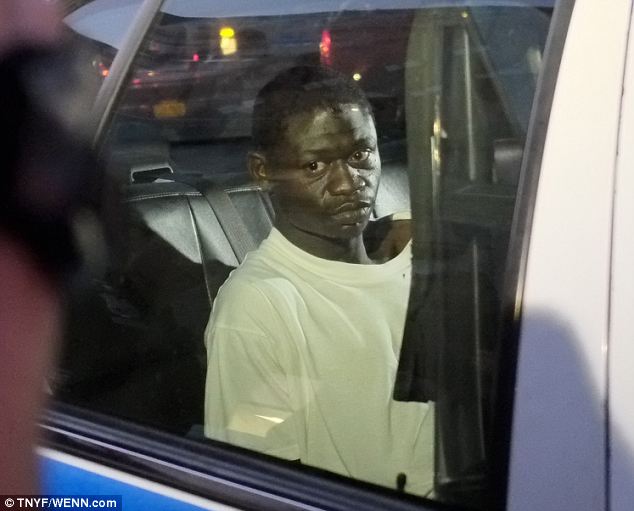 In custody: Jonathan Stewart is taken away by police after his arrest on suspicion of raping a woman in a popular New York City park this morning

The 25-year-old was rushed from the cells to Bellevue Hospital after trying to hang himself at about 10.40am on Sunday morning, the New York Post reported.

‘He’s lived with himself doing this so long, it’s surprising that now it has become too much,’ his alleged victim told the Post after hearing about the attempt.

The woman, an unnamed actress from Tribeca, today revealed how she asked him to think about his mother or sister before he launched his assault.

According to the New York Daily News, the 21-year-old woman asked him: ‘How can you do this? Don’t you have a mother and sister?’

She claims her attacker then looked at her and replied: ‘They’re dead. Shut up.’ 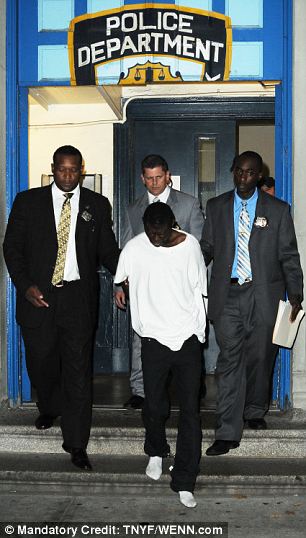 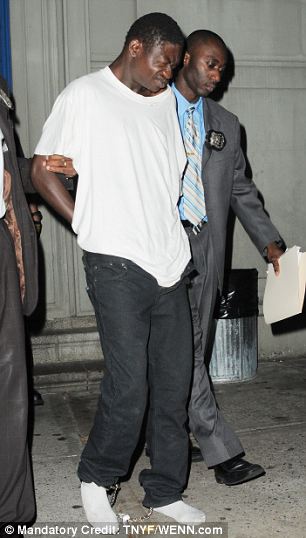 Detectives lead homeless Stewart from the police station: The suspect was on parole after last year being released from a seven-year sentence for robbing and assaulting a woman in 2004

The woman described how she was in a reflective mood when she went to the Hudson River Park at about 5.15am on Saturday in search of solitude.

She had been sitting on a bench when she was allegedly approached by Stewart – a registered Level III sex offender released from prison last year – who sat down beside her and began a conversation about her iPhone.

The actress said Stewart’s eyes were bloodshot red and, sensing danger, she got up to walk away.

However, she was dragged into nearby bushes where she was beaten, choked and raped

She told the New York Daily News: ‘It was a nightmare… it seemed like it lasted forever.’

Describing how she begged her attacker to stop, she added: ‘I’m a good person, I was trying to get on his moral side.’

The woman was able to break free from her attacker after about 20 or 30 minutes and ran, naked and screaming, through the middle of the park.

She was unable to call police because her phone had been smashed during the attack, but she found two Parks Department officers who circulated the rapist’s description via their radios. 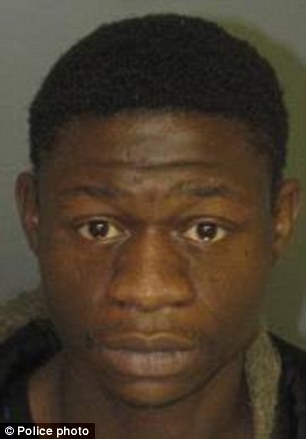 Attacker: Jonathan Stewart, 25, a registered level-III sex offender, was arrested over the assault

Homeless Stewart, who was released from prison in 2011 after serving a seven-year sentence for robbing and assaulting a woman in 2004, was arrested by NYPD officers nearby.

He has since been charged with rape, sex abuse, assault and forcible touching.

His victim, an actress who won roles on television after moving to the city four years ago, was taken to the Beth Israel Medical Center where she was given medical treatment before being released.

The woman told the New York Post how she found it ‘sickening’ when she found out her alleged attacker was still on the street despite being previously convicted of another sex crime.

She told the local how she felt ‘lucky to be alive’ adding: ‘I’m in pain, but trying to stay positive and keep my mind off of it. I’ve been sleeping a lot.’

Police sources described the woman as a ‘true victim’ and a ‘really good girl’ who had been enjoying the park’s tranquillity before the attack happened.

The two Park Enforcement officers who gave chase after the victim ran to them also today told of their part in the capture of the suspected rapist.

Officers Daniel Murphy and Luis Cabezas told The Tribeca Trib they had just come on duty at around 5am when the screaming victim came running toward them.

‘She ran towards us completely naked,’ Officer Murphy said, describing how his colleague immediately ran after the suspect while he helped her into the back seat of their car and gave her a blanket. ‘She was distraught, very distraught,’ he added.

Officer Murphy told the Trib how the suspect lay on the ground, shirtless and silent when he was cornered by them and officers of the NYPD about a block away on the West Street Median at North Moore Street.

Only about three minutes passed between their finding the woman and apprehending the suspect, the policeman added.

The Daily News reported that Stewart, who had been on parole until July, was also taken to hospital after his arrest. 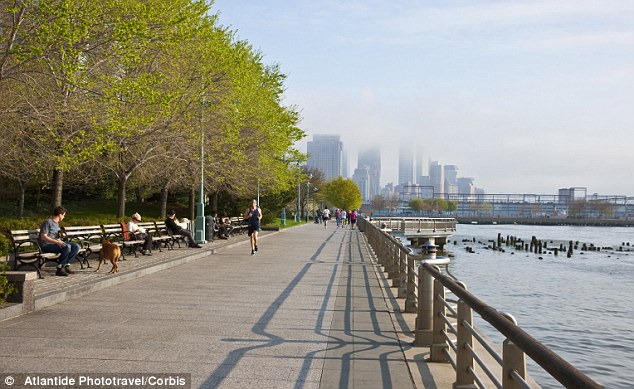 In search of solitude: The woman was in a reflective mood when she went to the Hudson River Park (pictured)

The violent sexual attack is the second this month within the city’s parks.

Earlier a 73-year-old woman was raped by a man in Central Park around the John Lennon landmark named Strawberry Fields after allegedly days before taking a compromising photo of him touching himself in public.

That man, 42-year-old David Albert Mitchell who is a convicted rapist and once suspect in a 2002 unsolved murder, was arrested on charges of first-degree rape, robbery, assault and other charges.

A group of city officials yesterday held a rally and march through the Hudson River Park to express the community’s outrage at the sex attacks.

At the ‘Take Back The Park’ demo, city council speaker Christine Quinn said that sexual predators will not be tolerated by the local community.

‘We are not going to yield one blade of grass, one acre of park to perpetrators who think women are going to live in fear,’ CBS New York quoted Ms Quinn as saying.

‘To anyone who thinks you can commit acts of sexual violence or any other violence against women and girls or anyone else in this city, we’re here to tell you, you cannot.’

Reports of sexual violence are on the rise in New York City. So far this year 1058 rapes have been reported in the city, an increase of 4 per cent compared to this time last year and nearly 11 per cent over the past two years.

Is fear of a black man justified?