HIV has been turned against itself in the laboratory in a breakthrough that could permanently quash the virus that leads to AIDS, say scientists.

A researcher in Australia worked out how to modify a protein in the virus, so that it instead provides strong, lasting protection from the infection.
‘This is like fighting fire with fire,’ David Harrich from the Queensland Institute of Medical Research, in Brisbane said.
‘If this research continues down its strong path, and bear in mind there are a many hurdles to clear, we’re looking at a cure for AIDS.’ 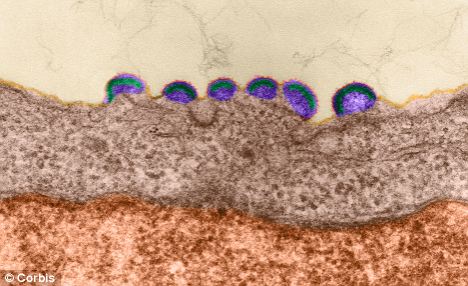 HIV budding in human lymphatic tissue. The breakthrough could keep the virus in a latent state in the body

Associate Professor Harrich invented the ‘Nullbasic’ protein by mutating an existing HIV protein. He said it has shown remarkable abilities to stop the virus replicating in a lab environment. Animal trials are due to start this year.
‘I have never seen anything like it. The modified protein works every time,’ he said.
‘You would still be infected with HIV, it’s not a cure for the virus. But the virus would stay latent, it wouldn’t wake up, so it wouldn’t develop into AIDS. With a treatment like this, you would maintain a healthy immune system.’

The successful development of this type of one-off treatment would also have economic implications. HIV patients must take a regime of drugs for the rest of their lives once their immune system is compromised, which can be a significant financial burden.

Indeed, a study released by Imperial College London has suggested patients should start taking antiretrovirals as soon as they are diagnosed as this could slow the damage to the immune system.

The latest research has been published in the current issue of Human Gene Therapy and marks three decades of work by Harrich. 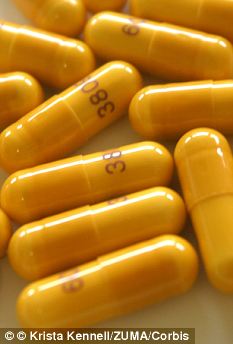 Associate Professor Harrich has been researching HIV for thirty years, since starting as a research assistant at the University of California, Los Angeles (UCLA) in the early 1980s when the first cases of HIV/AIDS emerged.
‘I’ve come close to giving up in the past. But today I’m so encouraged. I feel very fortunate because not a lot of scientists are able to stay in the same game long enough to see these sorts of developments. It involves perseverance, dedication and, of course, sustained research funding.’
Deborah Jack, Chief Executive of the National AIDS Trust: “The Australian study is very interesting and we’ll definitely be monitoring how the research continues.

‘It’s great that these sorts of studies are getting the funding and support they need and that we appear to be getting closer to understanding how HIV works, and what might in future become a cure.

‘This is one of a number of promising avenues in cure research, all of which need as appropriate continued discussion, funding and support.”

There are an estimated 32.2million HIV-infected people worldwide. The Terrence Higgins Trust estimates that 100,000 live in the UK, with around a quarter unaware they have the infection.
Read more: http://www.dailymail.co.uk/health/article-2264486/How-fighting-HIV-HIV-cure-AIDS.html#ixzz2IOZLeEWe

The Impact of racism and heart disease on African Americans