By NICK CUMMING-BRUCE
Published: January 18, 2013
GENEVA — As French and African troops escalated their offensive against Islamist forces in the north of Mali on Friday, the United Nations refugee agency said it was preparing for around 700,000 people to flee the violence, many to neighboring countries.
The United Nations believes that more than 400,000 refugees could flee to neighboring countries and that 300,000 more are likely to be displaced internally in the next few months, said Melissa Fleming, a spokeswoman for the United Nations high commissioner for refugees.
These will be in addition to around 376,000 who have fled the turmoil in the past year, she said, including 147,000 who went to Mauritania, Niger and Burkina Faso and 229,000 the Malian government estimates are displaced within the country.
Malians arriving in neighboring countries since the start of French airstrikes a week ago said they feared the strict application of Muslim Shariah law by Islamist rebels. They have given accounts of executions and amputations and reported that children as young as 10 had been recruited to join the rebel groups. 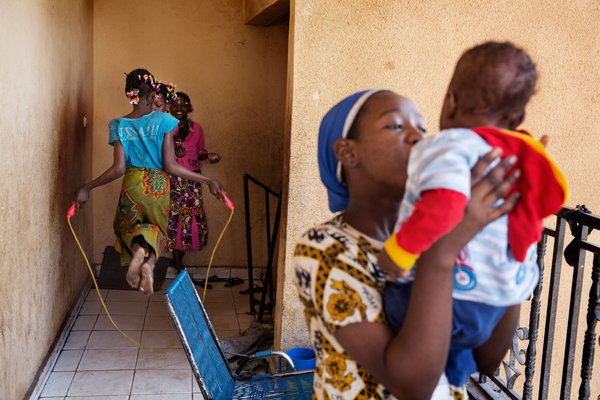 One of four refugee families living in a house in Bamako after northern Mali was taken over by Islamist militants last April.

Some families handed over children to the rebels for religious reasons, but the parents of most of the children were attracted by promised payments of around $700, according to a report to the United Nations Human Rights Council detailing serious abuses, including executions, torture and rape committed by armed groups in northern Mali. It also reported similar atrocities in areas under the control of the Malian Army.
The report, compiled by human rights experts who visited Mali and neighboring countries in November, said combatants of one armed group, the National Movement for the Liberation of Azawad, were reported to have executed 94 soldiers from a group of 153 it had captured.
Women in northern Mali have suffered harassment and sexual violence from armed groups applying extreme interpretations of Shariah, the report added. It cited the case of a 22-year-old woman raped by six armed men for not wearing a veil in her home. The report said girls as young as 12 had been forced to marry members of Al Qaeda in the Islamic Maghreb and other militant groups and subjected to days of gang rape before being abandoned after a “divorce.”
Malian soldiers were alleged to have executed nine Tuareg rebels in northern Mali in February and 16 pilgrims in September, the report said. It expressed alarm at mounting tension among ethnic groups in Mali and warned of possible reprisals against Tuareg and Arab communities believed to be linked to armed Islamist groups.