Three who hold seats with the U.S. Commission on Civil Rights warned the leader of the Congressional Black Caucus that granting amnesty to the estimated 11 million illegal immigrants now living in the United States would negatively impact blacks. The members‚ Vice Chairwoman Abigail Thernstrom, and Commissioners Peter Kirsanow and Gail Heriot — made their views known in a letter to the caucus head, Rep. Marcia Fudge, on Thursday. “In light of recent debates on comprehensive immigration reform, we are writing to address a rarely-discussed effect of granting legal status or effective amnesty to illegal immigrants,” the three members wrote, Breitbart reported. “Such grants of legal status will likely disproportionately harm lower-skilled African-Americans by making it more difficult for them to obtain employment, and depressing their wages when they do obtain employment.” 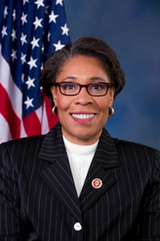 
The commission members went on, in their letter: “The increased employment difficulties will likely have negative consequences that extend far beyond economics.” In their letter, the commission members also refer to a 2008 briefing addressing just that topic. Then, information presented at the briefing found that illegal immigration “has a disparate impact on African-American men because these men are disproportionately represented in the low-skilled labor force,” Breitbart reported. The commission members concluded in their letter by asking if there were enough jobs in the low-skilled market to accommodate both blacks and 11 million illegal immigrants — and “the answer is no,” Breitbart reported. Breitbart did not report any response from Ms. Fudge, or from other members of the Congressional Black Caucus. Read more: