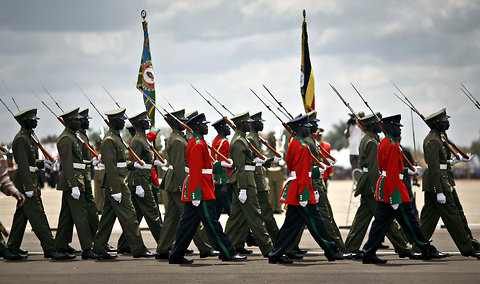 KAMPALA — It is sometimes said that the difference between a good party and a great one is not who is invited, but who is excluded: the crashing bores, the spoilsports, the bearers of inconvenient truths.

On Tuesday Uganda’s party-planner in chief, President Yoweri Museveni, seems to have followed this precept by force. Oct. 9 marked the country’s Golden Jubilee — 50 years of independence from its colonial master, Britain — and as president for over half of those 50 years, he made himself heard in speeches to supporters and foreign dignitaries in Kampala for the celebration.

But the voices of his opposition, in particular his former bush doctor and current political rival, Kizza Besigye, were muffled. Last week, when Besigye tried to speak to backers at the Kiseka market, in a downtown area of strong opposition support, police broke up the gathering and shuttled him into house arrest. He hasn’t been allowed to leave since.

“The situation has gone from bad to worse,” the opposition parliamentarian Mathias Mpuuga told me the day before the Jubilee from his Kampala home, where he has been under house arrest intermittently since attempting to launch a protest walk earlier this month. Uniformed men surrounded the homes of other opposition figures across the country, he told me. “A couple of weeks ago we had police. Now it is a full-blown military blockade,” he said, adding that police had attempted to enter Besigye’s home in Kasangati, a town just north of Kampala, early this Monday.

As the anniversary approached last week, the people of Kampala became palpably excited, either about the celebration or the confrontation it might bring on. The increasingly submissive Ugandan media were stoking the fever with patriotic stories about the public festivities and Uganda’s postcolonial history, including a multipart series in the independent newspaper The Monitor rehabilitating the image of Idi Amin.

The opposition, meanwhile, was calling attention to the creaking economy, a surge in corruption and the president’s antidemocratic rule. During the last two years of unrest, inflation here has fluctuated wildly, with rates at times as high as 20-30 percent and now still in the low double digits. Unemployment among university graduates remains sky-high; by some measures youth unemployment is at 80 percent.

To highlight discontent, opposition politicians had planned rival celebrations on Jubilee day. When the government effectively made those impossible, they threatened to attend the official gatherings with their own supporters. But then the president’s ordered the physical containment of his opponents. Mpuuga told me this was in keeping with other measures over the last year and a half. “We have not been allowed to hold rallies,” he said. “The regime is super annoyed.”

A decade or so ago Museveni was viewed as belonging to a new generation of African leaders, who would forgo l’état c’est moi mode of governance. He has since slowly transmogrified into his own former enemy, to the point that a senior Ugandan judge remarked that if the Museveni of today met the Museveni of 20 years ago, one would kill the other.

The organs of state, including government ministries, have become subservient to Museveni’s National Resistance Movement. The Ministry of Health is in effect run by a desk officer directly controlled by the presidency. Museveni’s reaction to dissenters has allegedly been to co-opt them by paying them off and retaining them nominally as advisers. He reportedly has 120 such advisers now — much more advice than he plausibly needs.

Among the few encouraging signs, according to the human rights lawyer Nicholas Opiyo, is the emergence of so-called Rebel M.P.’s from within the N.R.M. itself. “There are cracks in the ruling party,” Opiyo says, most notably an effort to impose term limits and ease Museveni out of power.

By any account Uganda has much to celebrate: an economy that, in spite of recent ill health, has grown steadily for a quarter century, a healing rift after civil war in the north, and gains against H.I.V. But growing corruption and oppression have marred Jubilee celebrations, as well as the legacy of the president. “For 25 years, Museveni has been the Iron Man,” says one British expatriate. “And now he’s starting to rust.”