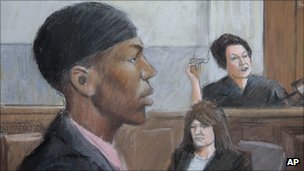 A Nigerian accused of trying to bomb a US-bound flight on Christmas Day 2009 has told his trial in Detroit that he is pleading guilty to all charges.

Umar Farouk Abdulmutallab, 24, told a judge he was admitting all eight counts against him, including terrorism and attempted murder.

Abdulmutallab was badly burned when a bomb sewn into his underwear failed to detonate fully, prosecutors say.

Almost 300 people were on the flight from Amsterdam to Detroit.

US Federal Judge Nancy Edmunds verified that Abdulmutallab understood his right to silence before asking him if he wished to make a plea.

“Do I understand correctly that you wish to waive that right [in order] to plead guilty to all the charges in the indictment?” she asked.

He told the court the bomb was a “blessed weapon to save the lives of innocent Muslims”.

“The US should be warned that if they continue to kill and support those who kill innocent Muslims, then the US should await a great calamity… or God will strike them directly,” he said.

US Attorney General Eric Holder welcomed the guilty plea, saying it showed the courts were “one of the most effective tools we have to fight terrorism.”

In a statement, he said: “Our priority in this case was to ensure that we arrested a man who tried to do us harm, that we collected actionable intelligence from him and that we prosecuted him in a way that was consistent with the rule of law.

“We will continue to be aggressive in our fight against terrorism and those who target us, and we will let results, not rhetoric, guide our actions.”

Al-Qaeda in the Arabian Peninsula (AQAP), which is based in Yemen, said it was behind the attack on 25 December 2009.

US investigators have said Abdulmutallab told them he was working for AQAP and had received the bomb from them, as well as training.

US and Yemeni officials have linked Abdulmutallab to radical cleric Anwar al-Awlaki, whom he is said to have met while in Yemen before the attack.

Al-Qaeda in the Arabian Peninsula

Awlaki was killed last month by a US drone strike in Yemen.

Abdulmutallab flew from Nigeria to Amsterdam, where he boarded Northwest Airlines Flight 253 to Detroit, which was carrying 279 passengers and 11 crew.

Passengers had to put out the fire after the bomb failed to detonate fully, the court heard on Monday.

Abdulmutallab’s father, Alhaji Umaru Mutallab, an influential banker who is well connected in Nigerian politics, said he had approached the US embassy officials and Nigerian authorities in 2009 to warn them about his son.

Abdulmutallab was denied a request to ban statements he made while being treated for burns at a hospital, as well as other material, from appearing at trial.

During the first day of his trial, on Monday, prosecutor Jonathan Tukel showed the court a picture of the remains of the burnt underwear which contained the explosive device.

Federal Bureau of Investigation (FBI) analysts found the high explosive pentaerythritol (PETN) inside the device. Officials say he planned to detonate it using a syringe filled with chemicals.

The bomb was not detected when Abdulmutallab passed through airport security in Lagos and Amsterdam.

The court was also shown a video of Abdulmutallab explaining his suicide mission.