On the campus of the University of Alabama, accusations that traditionally white sorority chapters had turned down an apparently impeccable candidate simply because she was black hardly came as a surprise.

The surprise was that it was sorority members — and not the candidate herself — who made the allegations, saying that in some cases they were pressured by alumnae to turn her down.

The allegations, reported on Wednesday in the student newspaper The Crimson White, were based on the account of Melanie Gotz, a member of Alpha Gamma Delta, and members of several other sororities who remained anonymous. In the report, parts of which were corroborated by sorority members, many students said they were open to recruiting the young woman, whose family has asked that she not be named; she is the stepdaughter of a state legislator and stepgranddaughter of a former State Supreme Court justice and current trustee of the university.

The members said they were pressured by outsiders, including a case in which, The Crimson White reported, the recruit was dropped from consideration at the insistence of a volunteer sorority adviser who also works for the university.

Stephannie Bailey, the executive director of Alpha Gamma Delta, said in an e-mail that the organization was “actively investigating” the situation for violations of its antidiscrimination policy.

Deborah M. Lane, a spokeswoman for the university administration, which has been criticized in the past for not doing enough about segregation within the Greek system, said that the university has been working with the organizations “to remove any barriers that prevent young women” from “making the choices they want to make.” She also said that these groups “determine their own membership selection processes and expect their members to follow their procedures during recruitment.”

Gov. Robert Bentley, who earned his undergraduate degree at Alabama, referred to the controversy on Thursday, saying to a television news reporter that universities could put pressure on the Greek system to integrate. He said that his wife, also an Alabama graduate, blamed the alumnae. “Personally, I think they need to change their attitude,” the governor said. 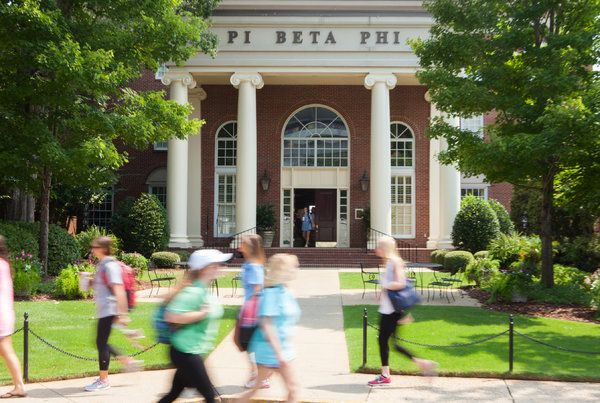 Cary Norton for The New York Times——–At the University of Alabama’s traditionally white sororities, including Pi Beta Phi, no black woman has made it through recruitment since 2003.

Ms. Gotz did not return a message seeking comment.

The news about the young woman, who was among several black women to go through this year’s recruitment process unsuccessfully, had been whispered around the Tuscaloosa campus in recent weeks. Students said they were unsurprised, even 50 years after Gov. George Wallace’s stand for segregation in the schoolhouse door and the university’s careful efforts to improve its reputation.

Black students have occasionally tried to join the traditionally white sororities, but these attempts have mostly gone nowhere. No black woman has made it through the recruitment process since 2003.

One biracial student on campus, who asked not to be identified, described her disappointment when she was turned down during a previous year. “I was surprised when it happened because I really thought I was going to be the exception,” she said, adding that members later told her in private, “It wasn’t our decision to cut you.”

“Every year, The C.W. comes out with basically the same story,” she said, referring to The Crimson White. “A lot of the students want to do something about it, but there’s just a lot of red tape from older people.”

Like many on campus, Ms. Jernigan was most struck by the fact that a sorority member was willing to speak out publicly, with others backing her up.

The weakening grip of tradition at Alabama may be inevitable. In 2012, for the first time, more than half of the incoming freshmen were from out of state.

“I really think it’s hard for Alabamians to envision how peculiar our traditions seem to outsiders,” said Andrew Grace, who teaches documentary filmmaking at Alabama.

As an example of how significant a departure from tradition the Crimson White article represents, Mr. Grace pointed out that it ran on the cover on the 100th birthday of the revered Alabama football coach, Bear Bryant.