The University of Delaware dedicated its newest residence hall last week to the very man who took the school to court and won 63 years ago.
The dorm building, located behind Perkins Student Center and next to the Harrington turf, was completed over the summer and unveiled Friday as Louis Redding Hall, named after Delaware civil rights lawyer Louis L. Redding, who successfully filed a case against UD in 1950 for barring African-Americans from attending the university. As a result, UD became the first state-funded institution to desegregate by court order.
Louis Redding Hall is UD’s first building named after a prominent Delaware African-American and is the new home to first-year honors students.

Lucas Redding, grandson of civil rights lawyer Louis L. Redding, said his grandfather is “a shining example of what doing good in the law looks like.” The University of Delaware honored Redding on Friday by naming their newest dorm building Louis Redding Hall.


UD President Patrick Harker said Friday that Redding’s passion for social justice has forever changed the university, which now boasts diversity as a cornerstone in its “Path to Prominence.” He said honoring Redding’s importance to the school was “a day long overdue.”
“We understand how hard we must work and how far we must go because of him,” Harker said.
Redding was born in 1901 and attended Brown University in Providence, R.I., where he graduated with honors in 1923. Two years later, he went to Harvard Law School, the only African-American in his 1928 graduating class, and was admitted to the Delaware Bar the next year. Redding continued to practice law in the state for 57 years and fought for social justice as he challenged discrimination in housing, employment, public accommodations and the criminal justice system until he died at 96 in 1998.
James Jones, UD psychology and black American studies professor, called Redding an American hero and a Delaware treasure Friday for his courage, passion and dedication to social justice, noting Redding’s impact on the campus.
He said 2,459 African-American students now attend UD, as opposed to the very few who attended in the early 1950’s. Approximately 24 percent of the 2013 freshman class, some of which now live in Louis Redding Hall, are students of color. Still, Jones said the university can do better. 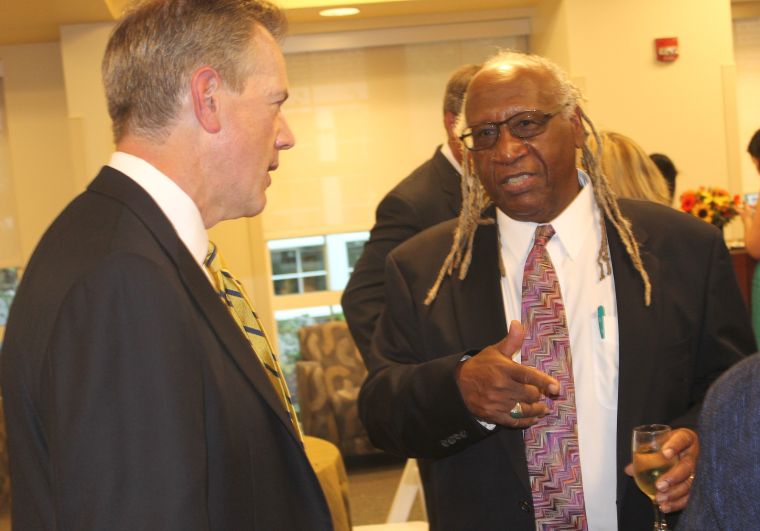 
“We are not where we need to be when it comes to diversity on this campus, but we’ve come a very long way,” he said, as Harker nodded his head in agreement.
Stefan Redding, grandson of Louis L. Redding, said he hopes the new building’s dedication will inspire students to continue his grandfather’s fight for social justice.
“He has opened a door for us, but we have not yet walked through,” he said. “To truly honor that legacy, we cannot just reflect on what he accomplished, we must reflect on how we can bring to bear his vision of equality of opportunity for all.”