The University of Miami has come under fire after it sent a seemingly racist emergency text to students warning that a ‘black male’ was on campus.

The University had meant to alert students on Wednesday night to the fact that police were pursuing two suspects in a reported laptop theft and that one was armed. 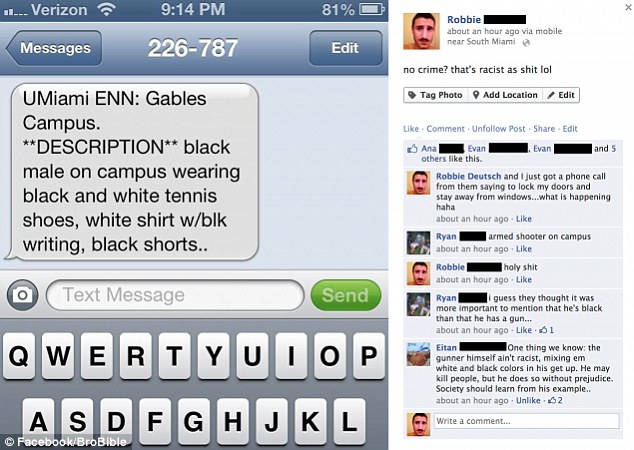 Embarrassing: The University’s message, pictured, failed to mention the crime, simply stating that the suspect was black

After the alert, the university reportedly phoned students, telling them to lock their doors and stay away from windows.

The strange text quickly found its way onto the internet where it sparked a mix of confusion and criticism.

Facebook user Robbie Deutsch posted a picture of the text message on his page and received a barrage of comments. 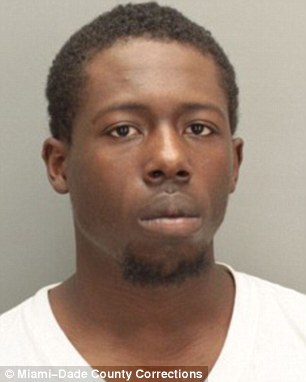 ‘I guess they thought it was more important to mention that he’s black than that he has a gun…’ Ryan Farber wrote.

While Eitan Finkelstein made a joke out of the situation.

‘One thing we know: the gunner himself ain’t racist, mixing em white and black colors in his get up,’ he wrote. ‘He may kill people, but he does so without prejudice. Society should learn from his example..’

The University responded to the outrage with a statement of its Facebook page apologising for the ‘incomplete and insensitive’ messages.

‘The University of Miami Police Department issued an ENN (Emergency Notification Network) at 9:13pm to alert the campus community to the developing situation and to make them aware of the police perimeter and ongoing search for the suspects,’ it read.

‘At 9:49pm, an all-clear message was communicated. The initial ENN was both incomplete and insensitive and the University of Miami offers its sincere apologies.

‘University leadership has already launched a full investigation of the incident, the ENN and University procedures.

‘The University will make every effort to learn from this experience and to improve its responsiveness in the future.’

The ‘black man’ in the warning text, Del’Neco Streeter of Miami, was apprehended by police at the scene and a second suspect is still being pursued. 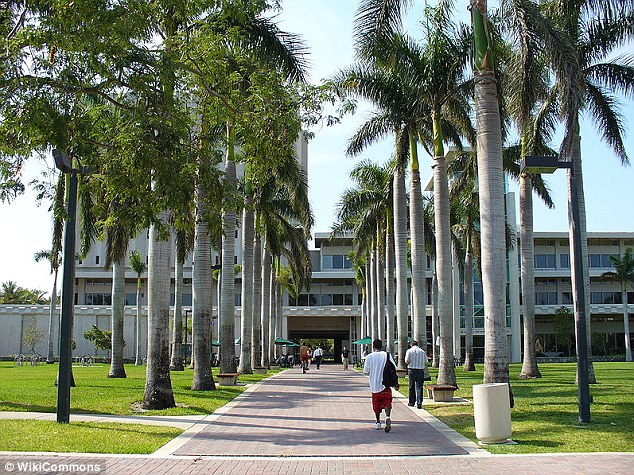 Apology: The University of Miami, pictured, apologised for the message claiming it was ‘incomplete and insensitive’

The 21-year-old, who doesn’t attend the University, is accused of stealing an Apple MacBook Pro laptop computer from a dorm room earlier in the week. He then attempted to sell the item back to its owner for $1,000 and arranged a ‘drop time.’

Officers managed to recover the laptop.

The university has had an emergency notification system for years. It was expanded after 2007’s Virginia Tech shooting massacre.