Researchers from the University of Pittsburgh found that black women have to eat less and exercise more than white women to lose the same amount of weight, because their resting metabolic rates are lower.

A new study has found that African-American women have to eat less or exercise more in order to lose as much weight as their Caucasian counterparts.
It’s a harsh reality that scientists from the University of Pittsburgh attribute in part to their lower resting metabolic rates and lower calorie expenditure, despite being put on the same exercise regime.

For the study, published online in the International Journal of Obesity, a group of 39 severely obese African-American and 66 Caucasian women were examined as they underwent a six-month weight loss program that consisted of calorie restriction and increased physical activity.

The group of African-American women lost about eight pounds less than their Caucasian counterparts. 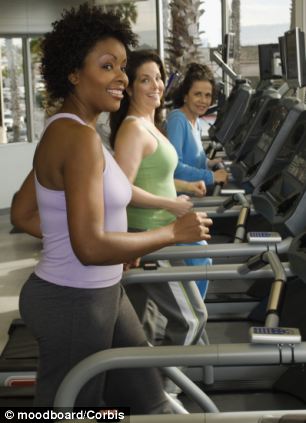 “We prescribe how many calories are allowed and how much activity is needed during weight loss interventions based on the premise that people of the same weight have similar metabolic rates,” explained lead author James DeLany.
“But to account for their lower metabolic rate, African-American women must further reduce the number of calories they eat or use up more of them with exercise in order to lose the same number of pounds in the same time span as a Caucasian woman of the same weight.”

Meanwhile, one of the biggest reasons African-American women avoid exercising? In a study published last year, 40% of the 103 female respondents said it was because they didn’t want to ruin their hairdo.
Given that hair care and hairstyle maintenance can be expensive for African-American women, many ladies would rather opt to forego physical activity and associated sweating, the report said.
Read more: http://www.nydailynews.com/life-style/health/weight-loss-harder-black-women-article-1.1558723#ixzz2odrnt9c5