By KEN BELSON
Published: January 26, 2013
As B. J. and Justin Upton settle into their new roles as star outfielders on the Atlanta Braves, they will inevitably be compared with other baseball siblings and asked about the ups and downs of sharing the spotlight with a brother.
If they want any advice on how to cope, they need only visit the executive offices at Turner Field to see Hank Aaron, a senior vice president with the Braves. Aaron and his younger brother Tommie played together for parts of seven seasons on the Braves in Milwaukee and Atlanta. They formed one of the most powerful yet lopsided pair of baseball brothers.
Together, they hit 768 home runs in the major leagues, by far the most of any brother combination. Henry hit 755, or 98 percent of them, and Tommie hit the other 13, with eight of them coming in 1962, his first season in the majors. The second most home runs were hit by Joe, Vince and Dom DiMaggio (573), followed by Eddie and Rich Murray, who had 508 together, 504 of them by Eddie. Jason and Jeremy Giambi (481 home runs) and Jose and Ozzie Canseco (462) round out the top five. 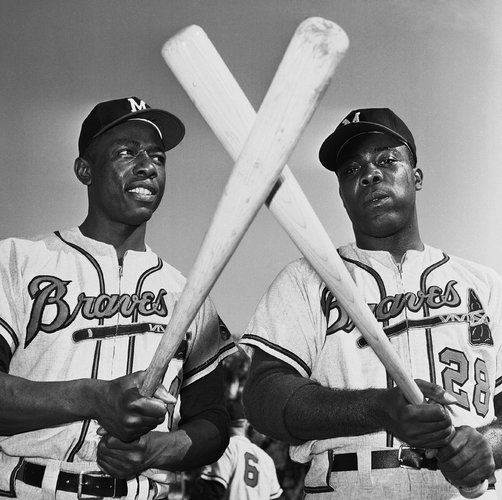 Hank Aaron, left, and his brother at spring training in 1962, Tommie’s first year in the majors.

As with most brothers in baseball, one of the Aarons was far superior. By the time Tommie broke in with the Braves, Hank had already played eight seasons in Milwaukee, led them to a World Series title and become established as one of the game’s biggest stars. Hank, nearly six years older than Tommie, was the big brother off the field, too.
But most accounts, Tommie, who died of leukemia in 1984 at age 45, took the obvious comparisons in stride and understood that he would never be the player his brother was. Instead, he focused on becoming a good fielder and a spray hitter. Hank avoided giving advice to Tommie unless he was asked, and Tommie knew he had to succeed on his talents, not his last name.
“It was tough on him, and in some ways, the bar that was set by me was high, and he wasn’t going to be that kind of hitter,” Aaron, 79, said in an interview on Friday. “It would be tough on him because other people knew he wouldn’t be another Henry Aaron.”
Brothers, of course, can be the best of friends or mortal enemies, sometimes at the same time. But because of their gap in age and experience, Hank and Tommie had their own circles on the team, though they did not avoid each other, either, Aaron said. Their teammates understood that Hank was well ahead of his brother but did not make a big deal about it.
“They respected me as a baseball player and being a little bit more knowledgeable than my brother,” Aaron said.
Tommie’s only full season in the major leagues was in 1962. But he made history in his own way. In July 1962, Tommie and Hank became the first brothers to homer in the same game for the same team since Lloyd and Paul Waner accomplished the feat for the Pirates three decades earlier. The Aaron brothers also appeared in the second game of the 1969 National League Championship Series against the Mets. Henry hit a three-run homer; Tommie grounded out in his only at bat.
Tommie hit the first home run in Atlanta-Fulton County Stadium, during an exhibition game. “He was ahead of me on that one,” Hank said with a chuckle.
And while Tommie batted only .229 in the major leagues, he was the most valuable player in the International League in 1967 and was inducted into the league’s Hall of Fame. He also became the league’s first black manager and led the Richmond Braves to the league title in 1978.
Even after he left the Braves, the questions about his famous older brother never seemed to end. But Tommie had the right makeup for the role thrust on him.
“There wasn’t a jealous bone in his body, and he certainly was proud of his brother,” said Joe Torre, who played with the Aarons on the Braves and had his own sibling rivalry with his brother, Frank, who played for the Braves and the Phillies. “There was certainly no doubt that Hank was the baseball star in the family. You couldn’t ignore it. But Tommie had the right frame of mind in that relationship.”
That included cheering for Hank when he was chasing Babe Ruth’s home run record. “I think I’ll feel just as happy as he will,” he said in 1973. “Probably happier. Look, he’s my brother. I love him.”