Like a posse from the old west, the urban cowboys of north Philadelphia’s Fletcher Street battle against the gang violence and drugs of a modern American inner city.

Saddling up in the City of Brotherly Love for the past 100 years, the 30 or so members of the Fletcher Street riders operate right in the heart of one of Philadelphia’s most deprived areas.

Describing themselves as ‘ghetto fabulous’, the ‘black cowboys’ of Fletcher Street take great pride in their status as they fight to ensure that the next generation of young men and boys in the neighbourhood do not fall into a life of crime. 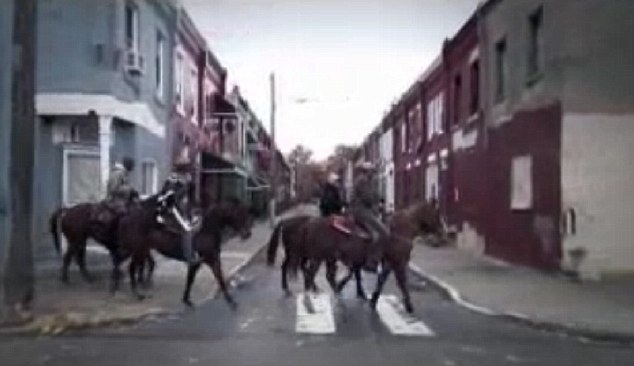 One of the last remaining urban riding clubs in the city, the Fletcher Street cowboys are encouraged to care for their horse like it is a family member.

‘Your horse is a reflection of the kind of person that you are.’ said Hop White, who operates the facility.

‘You don’t want someone to be able to say anything about something you are riding.

‘If your horse is skinny, that you ride, they drill you.’

‘And if your horse is dirty, they’ll talk about you.

‘Your horse is like a family member of yours. And you are a team and it depends on you.’ 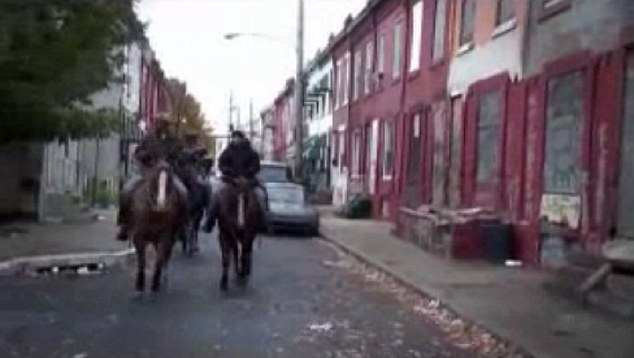 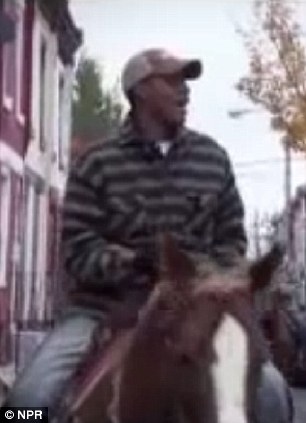 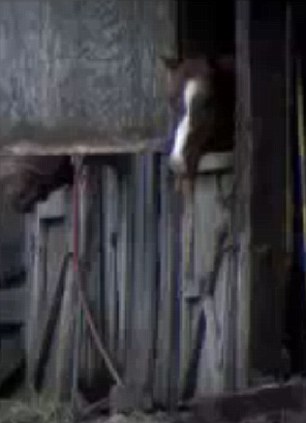 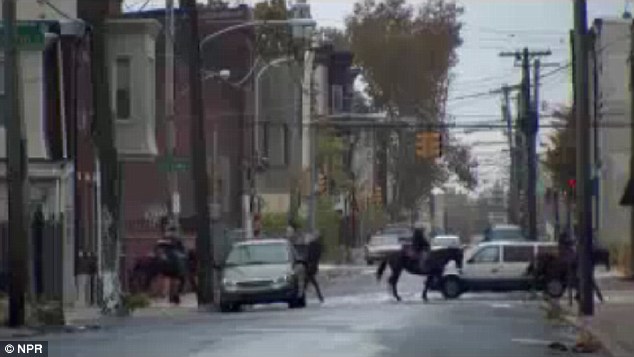 Led by longtime Fletcher Street resident, Ellis Ferrill, the club is a registered nonprofit which relies on public donations to purchase, feed and care for their horses.

With names such as Red Pony, Champ, Power, White Chick, One Eye and Easy Like Sunday Morning, the horses are the explicit responsibility of each cowboy.

Each steed is ‘rescued’ from a livestock auction in New Holland in Pennsylvania, which the owners of the club like to think mirrors the second chance that a lot of the cowboys of Fletcher Street have taken.

In the shadow of Philadelphia’s gleaming skyscrapers, the 30 horses of Fletcher Street live in rudimentary stables which four years ago were the subject of an investigation by The American Society for the Prevention of Cruelty to Animals (SPCA)

Improving the quality of care has been expensive, but there was never any suggestion of neglect towards the horses of Fletcher Street. 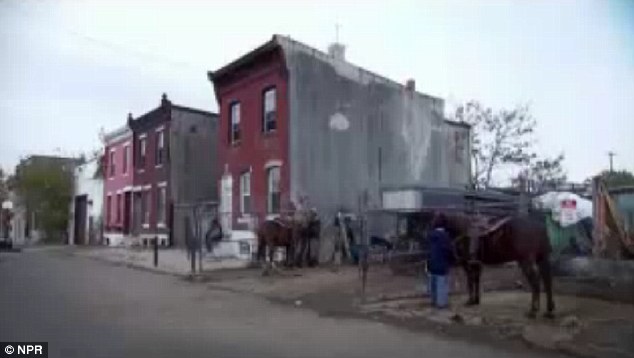 The stables on Fletcher Street holds space for around 30 horses 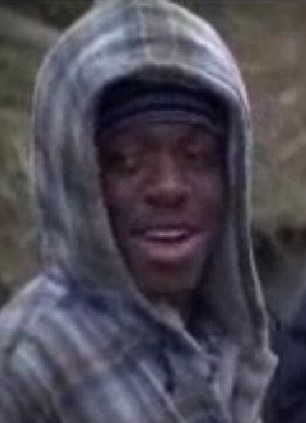 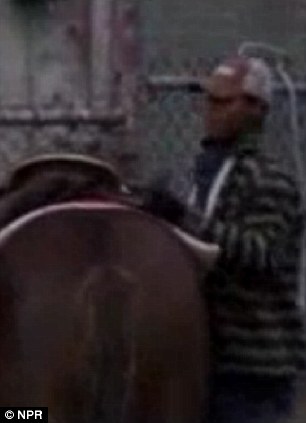 Ignoring the criticism of their peers and friends, many of the urban cowboys of Fletcher Street feel their horse grants them a status symbol to protect 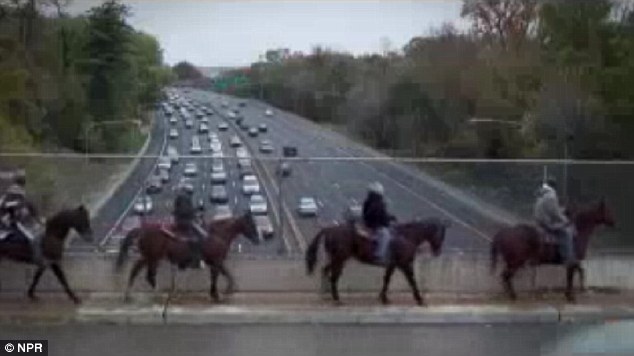 ‘We have a business license. We keep our horses looking good. We may not have the best facility, but we give them the best food money can buy and we love them,’ said Lee Cannady, a Philadelphia police officer and lifelong patron of the riding club to Pennsylvania Equestrian

Joining the riders is a tradition in some families in the neighbourhood, while others are recruited after coming to the stables themselves to join.

The youngest riders can be as young as six-years-old and some are in their 70s.

‘The kids that come around, they’re wanderers you know,’ said White.

‘Not that their parents don’t love them or are concerned about them, but they get their free time when they wander off.

‘And when they wander off they wander into the stables and then they become a part of our family here.’ 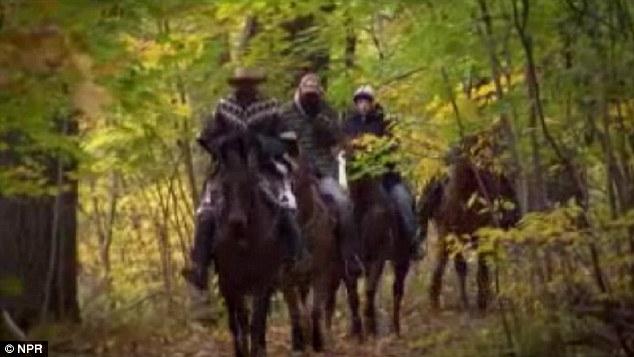 Making their way through wooded areas of Fairmont Park, the riders of Fletcher Street look like something from another era

The urban cowboys of Fletcher Street count discipline, responsibility and accountability as necessary for joining their ranks.

‘Once a kid comes around here, it’s hard for them to detach themselves,’ said White.

‘They look at this as another part of the world. You don’t have anyone cursing, doing drugs, shouting.

‘The kids must bring their report cards. If they get bad grades, they can’t ride until they bring their grades up.’ 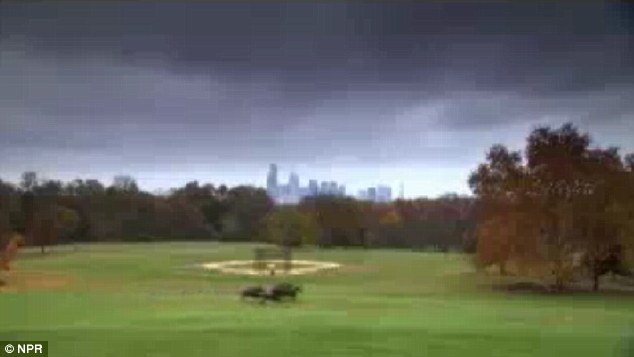 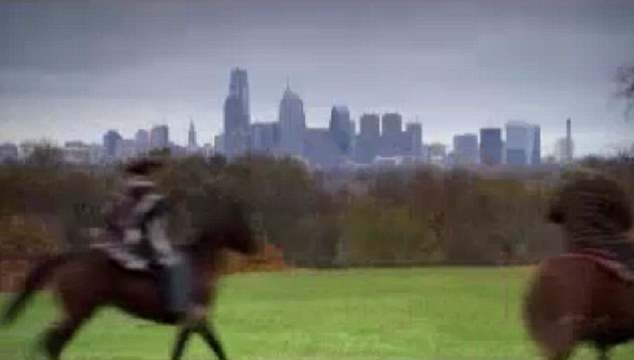 Furthermore, the neighbourhood where the urban cowboys of Fletcher Street roam bucks the trend city wide for gang violence and drugs.

‘There’s not one murder, not one drug dealer, not one knifing or other crime here,’ said White.

‘A couple of blocks away, that’s not the case.

‘When they see us riding around the neighborhood, they follow us.

‘We encourage them to come around and see what it’s like.’

For some young riders, membership of the club confuses their friends.

‘When I first told them they thought it was kind of weird,’ said one young cowboy.

‘I got one girlfriend. She thinks its adorable.

‘On a horse you got people looking at you rather than you looking a people.

‘On the horse we are black cowboys.’