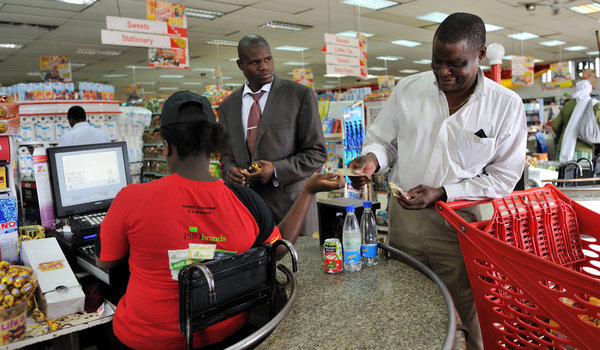 HARARE, Zimbabwe — When Zimbabweans say they are waiting for change, they are usually talking about politics. After all, the country has had the same leader since 1980.

But these days, Robson Madzumbara spends a lot of time quite literally waiting around for change. Pocket change, that is. He waits for it at supermarkets, on the bus, at the vegetable stall he runs and just about anywhere he buys or sells anything.

“We never have enough change,” he said, manning the vegetable stall he has run for the past two decades. “Change is a big problem in Zimbabwe.”

For years, Zimbabwe was infamous for the opposite problem: mind-boggling inflation. Trips to the supermarket required ridiculous boxloads of cash. By January 2009, the country was churning out bills worth 100 trillion Zimbabwean dollars, which were soon so worthless they would not buy a loaf of bread (the notes now circulate on eBay, as gag gifts).

But since Zimbabwe started using the United States dollar as its currency in 2009, it has run into a surprising quandary. Once worth too little, money in Zimbabwe is now worth too much.

“For your average Zimbabwean, a dollar is a lot of money,” said Tony Hawkins, an economist at the University of Zimbabwe.

Zimbabweans call it “the coin problem.” Simply put, the country hardly has any. Coins are heavy, making them expensive to ship here. But in a nation where millions of people live on a dollar or two a day, trying to get every transaction to add up to a whole dollar has proved a national headache.

Still, the new predicament is an improvement. By virtually wiping out inflation, analysts say, use of the United States dollar saved Zimbabwe from total economic collapse and brought the country back from the brink. The country’s political future remains deeply unsettled since the disputed 2008 election gave way to a shaky power-sharing government. But its economy is growing, if from a very low base.

Zimbabweans have devised a variety of solutions to get around the change problem, none of them entirely satisfactory. At supermarkets, impulse purchases have become almost compulsory. When the total is less than a dollar, the customer is offered candy, a pen or matches to make up the difference. Some shops offer credit slips, a kind of scrip that has begun to circulate here.

But for small merchants who sell handfuls of tomatoes, onions and lemons to poor people, customers may not always have the luxury of buying a dollar’s worth of merchandise.

Christine Mhalanga, 27, a hospital orderly, went to buy tomatoes from Evelyn Chikandiwa, who runs another vegetable stall. She selected a stack of tomatoes and some onions for stew. Mercifully, her purchase was exactly a dollar because Ms. Chikandiwa had no coins in her gingham apron to break any bills.

“I already had to buy clothespins I don’t need today,” Ms. Mhalanga said. “A dollar is a lot of money for me. I need every bit of it. Trust me.”

According to the United States Federal Reserve, at least five countries have officially adopted the United States dollar as their currency. Several more, like Zimbabwe, use it almost exclusively but hold on to a national currency, even if it is not in circulation.

But United States coins seldom circulate more than 100 miles beyond the country’s borders because of their weight and high shipping costs.

Most countries that use the dollar get around this problem by minting local coins: Ecuador uses the dollar as legal tender but mints centavo coins. The government guarantees that anyone who wants to exchange 100 Ecuadorean centavos for a genuine United States dollar can do so.

But that requires confidence in the local government, something that is in even shorter supply here than coins. Zimbabweans say they want no legal tender issued by their government.

“I won’t accept any Zimbabwean money,” said Ms. Chikandiwa, the vegetable seller, who saw her life savings wiped out by hyperinflation. Back then, the value of the currency dropped so fast that prices for milk, cigarettes, sugar and flour would change by the hour, if not the minute. These days, Ms. Chikandiwa keeps all her earnings in cash, not trusting her precious dollars to the bank. “We can’t trust these people,” she said, referring to the government.

Many Zimbabweans use coins from neighboring South Africa. But that presents its own difficulties. South African coins — the currency is the rand — are in short supply. Complicating matters, the rand, like most currencies, fluctuates against the dollar, making prices tough to fix.

Tendai Biti, Zimbabwe’s finance minister and a senior politician in the opposition Movement for Democratic Change, said that he had tried, to no avail, to find a solution.

“We have been seeking help from the Fed in the States, but we haven’t got a lot of joy,” he said, an edge of frustration seeping into his voice.

Supermarket cashiers are frustrated, too, and they devise their own ways to defuse the tension. Every transaction is a miniature drama of anticipation, annoyance and negotiation. The shopper tries to add up purchases to avoid needing change. And at the register, shoppers must make up their minds on how to compensate for failure.

As Lydia Zhuwawu worked the cash register at the Classic Supermarket in Harare during the evening rush this week, she tried to size up her customers to guess what they might accept in lieu of change.

A basket full of tomatoes and onions comes to $2.80. Ms. Zhuwawu has two well-worn singles for the $5 note, but no nickels or dimes.

“Sorry, no change,” Ms. Zhuwawu said, waving a hand at her assortment of wares.

The customer chooses a packet of four aspirin, 5 cents apiece.

Next up: a customer with $3.90 worth of groceries. Ms. Zhuwawu offers up a steel bottle opener.

“This is for 10 cents?” the customer asks, wearily. She takes it.

With single dollar bills in heavy rotation, they tend to suffer a lot of wear and tear. Many are filthy — almost black. Ms. Zhuwawu takes note of the cleanliness of the legal tender each customer hands her. Two-dollar bills, rare in the United States, circulate widely here.

Most people, she said, have a sense of humor about the problem. After all that Zimbabwe has been through, it is not that big a burden, she said. It is a give-and-take.

A man comes in to buy staples. A box is 30 cents; he has only a dollar. Her change drawer is empty.

“Just take it,” Ms. Zhuwawu said. “It’s your lucky day. Nothing is free in Zimbabwe.”