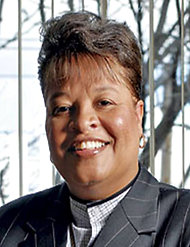 Valerie Daniels-Carter is the co-founder, president and C.E.O. of V&J Holding Companies, Milwaukee.

MY parents instilled a strong work ethic in my siblings and me.

In first grade, I walked four kindergartners to and from school and made $1.25 a week. I was only a year older than them, but I was tall and looked older than I was. Their parents thought I offered some measure of protection. A couple of years ago, I became reacquainted with one of those girls.

As a preteen, I started arranging my two younger brothers’ work assignments. They cut lawns and shoveled snow. I’d price the jobs and distribute a schedule to their clients. In my teens, I worked for the parks system and managed a restaurant for a food vendor at Summerfest, a music festival. Later, I served on and was president of the board of the parent organization, the Milwaukee World Festival.

My father died in my senior year in high school. While attending Lincoln University in Jefferson City, Mo., I worked several jobs to help my mother pay my way. I was a disc jockey, a supermarket cashier and an assistant to a professor in a chemistry lab.

After graduating with a business degree in 1978, I got a job offer from what is now U.S. Bank in Milwaukee. I had played basketball from middle school through college, and along with the bank’s offer, I received one from the Milwaukee Does to play professional basketball. After the first few practices, I didn’t think it would be a career that would sustain me, so I took the bank job. In those years, women’s basketball did not have the stature it does now.

I started at the bank as a management trainee in its retail commercial lending department. In 1982, I moved to the MGIC Investment Corporation, a mortgage insurance company in Milwaukee, where I was an auditor in the underwriting division while also pursuing a master’s in management at Cardinal Stritch University.

I always planned to own a business, so I began researching franchises. I needed more capital, however, so I asked my brother John, a lawyer and now our chairman, to be my partner.

At the same time I started at MGIC, I initiated the application process to be a Burger King franchisee. We opened our first Burger King site as V & J Foods in 1984. As we started adding locations and brands, we changed our name to V & J Holding Companies. We now have 36 Burger Kings and 68 Pizza Huts, along with 5 Häagen-Dazs and 4 Coffee Beanery stores. And we have a joint venture with Shaquille O’Neal. We share ownership of 11 of our 21 Auntie Anne’s pretzel stores.

I was not the typical franchisee when I started, and I had to challenge the status quo in the franchise industry. I met several unnecessary delays; it was a test of endurance. I wanted to help other African-American women have a chance. When I give motivational talks today, I tell people not to let anyone keep them from their dream.

My husband, Jeffrey Alan Carter Sr., used to walk into my assistant’s office and tell her to block out a certain week on the calendar because he was taking me on vacation. He died 13 years ago in an accident at his job. When you lose a life partner who loves you and supports what you’re doing, it leaves a void. His death gave me a greater appreciation of my strength.

I want to see young people here in Milwaukee make good choices in life. In the late 1990s, I partnered with my church, Holy Redeemer, to help. We’ve built a Boys & Girls Club, two schools, a medical facility, a loan center and the Mother Kathryn Daniels Conference Center, named for my mother.

I’m an avid sports fan. In 2011, I became the first African-American woman elected to the board of the Green Bay Packers. It was a high honor .

As told to Patricia R. Olsen.