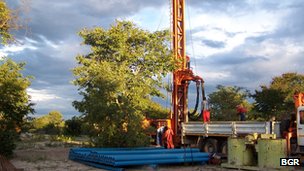 Pressure from the aquifer means the water is cheap to extract

A newly discovered water source in Namibia could have a major impact on development in the driest country in sub-Saharan Africa.

Estimates suggest the aquifer could supply the north of the country for 400 years at current rates of consumption.

Scientists say the water is up to 10,000 years old but is cleaner to drink than many modern sources.

However, there are concerns that unauthorised drilling could threaten the new supply.

For the people of northern Namibia water is something that they either have too much of or too little.

The 800,000 people who live in the area depend for their drinking water on a 40-year-old canal that brings the scarce resource across the border from Angola.

Over the past decade the Namibian government have been trying to tackle the lack of a sustainable supply in partnership with researchers from Germany and other EU countries.

They have now identified a new aquifer called Ohangwena II, which flows under the boundary between Angola and Namibia.

According to project manager Martin Quinger, from the German federal institute for geoscience and natural resources (BGR), it’s a substantial body of water.

“The amount of stored water would equal the current supply of this area in northern Namibia for 400 years, which has about 40 percent of the nation’s population.”

“What we are aiming at is a sustainable water supply so we only extract the amount of water that is being recharged.

“What we can say is that the huge amount of stored water is will always be enough for a back up for an area that is currently supplied only by surface water.” 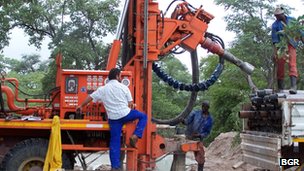 Test drilling on the new aquifer

This region is dependent on two rivers for its water supply. But this has restricted agricultural development to areas close to these water sources. Mr Quinger says that the new aquifer has great potential to change the nature of farming in the area.

“For the rural water supply the water will be well suited for irrigation and stock watering, the possibilities that we open with this alternative resource are quite massive.” he explains.

As well as providing a new source for agriculture in a region the aquifer will augment existing potable supplies. Martin Quinger says the discovery may be up to 10,000 years old but it is still good to drink.

“If the water [has spent] 10,000 years underground, it means it was recharged at a time when environmental pollution was not yet an issue, so on average it can be a lot better than water that infiltrates in cycles of months or years.”

The natural pressure that the water is under means that it is easy and cheap to extract. But because a smaller salty aquifer sits on top of the new find it raises the possibility that unauthorised drilling could threaten the quality of the water.

Martin Quinger says that random drilling into the aquifer could be dangerous.

“If people don’t comply with our technical recommendations they might create a hydraulic shortcut between the two aquifers which might lead to the salty water from the upper one contaminating the deep one or vice versa.”

One of the biggest advantages of the new aquifer could be in helping people cope with climate change.

The researchers estimate that it could act as a natural buffer for up to 15 years of drought.

As well as identifying the new water source a key aim for the researchers involved is to develop the capacity among young Namibians to manage their country’s water resources before the funding from the EU runs out.