By DANIEL E. SLOTNIK
Published: December 21, 2012
Vernice D. Ferguson, who fought for greater opportunities, higher wages and more respect for nurses as a longtime chief nursing officer for the Veterans Administration, died on Dec. 8 at her home in Washington. She was 84.
Her niece Hope Ferguson confirmed her death.
America faced a nursing shortage when Ms. Ferguson began overseeing the agency’s more than 60,000 nurses nationwide in 1980. Historically, the nursing ranks were overwhelmingly female, but as job opportunities began to expand for young women in the late 1970s, nursing, with its prospect of strenuous work, irregular hours and relatively low pay, was losing its appeal.
Doctors, most of whom were men, were paid far more and rarely discussed medical treatments with nurses, despite nurses’ hands-on knowledge of patients.
“What is good enough for the doctor is good enough for me and the nursing staff,” Ms. Ferguson was quoted as saying in the book “Pivotal Moments in Nursing: Leaders Who Changed the Path of a Profession,” by Beth Houser and Kathy Player. “Whatever the boys have, I am going to get the same thing for the girls.”
In 1981, Ms. Ferguson told National Journal, “Hospitals are going to have to rethink and restructure their policies to let nurses perform nursing services and let others attend to ‘hotel’ services,” like making beds and handling phone calls. 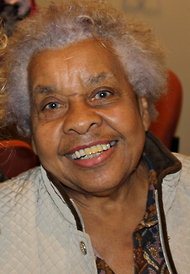 
Ms. Ferguson helped establish an agency scholarship program to recruit and retain nurses and made educational programs that had been restricted to doctors open to nurses as well.
By 1992, when she left the agency — then the Department of Veterans Affairs — the number of registered nurses there with bachelor’s degrees or higher had more than doubled. Nurses’ salaries also increased throughout the field. In 1980, their average annual pay was $26,826 in 2008 dollars; in 2008, it was $66,973, according to the most recent survey of registered nurses.
Vernice Doris Ferguson was born on June 13, 1928, in Fayetteville, N.C. Her father was a minister in Baltimore, where she grew up, and her mother was a teacher. At a time when few black women attended college, Ms. Ferguson graduated from New York University with a nursing degree in 1950 and was awarded the Lavinia L. Dock prize for high scholastic standing. At the awards ceremony, the director of nursing refused to shake her hand, Ms. Houser and Ms. Player wrote.
Ms. Ferguson’s first job out of college was in a research unit financed by the National Institutes of Health at Montefiore Medical Center in the Bronx. She went on to be a co-author of papers in The American Journal of Nursing, The Journal of Clinical Nutrition and The Journal of Clinical Investigation.
She worked in several hospitals around the country, and from 1972 to 1980 was the chief of the nursing department of the Clinical Center at the National Institutes of Health. A brief marriage ended in divorce. Her survivors include a sister, Velma O. Ferguson, and several nieces and nephews.
After retiring in 1992, Ms. Ferguson was appointed senior fellow at the University of Pennsylvania School of Nursing.