Vicente Guerrero (Spanish: [biˈsente ɡeˈreɾo]; August 10, 1782 – February 14, 1831) was one of the leading revolutionary generals of the Mexican War of Independence. He fought againstSpain for independence in the early 19th century, and later served as President of Mexico. He was also the grandfather of the Mexican politician and intellectual Vicente Riva Palacio.

Guerrero was born in Tixtla, a town 100 kilometers inland from the port of Acapulco, in the Sierra Madre del Sur, his parents were Pedro Guerrero, a Mestizo, and María de Guadalupe Saldaña, an African slave.  His family consisted of landlords, rich farmers and traders with broad business connections in the south, members of the Spanish militia and gun and cannon makers. In his youth he worked for his father’s freight business. His travels took him to different parts of Mexico where he heard of the ideas of independence.

Vicente’s father, Pedro, supported Spanish rule, whereas his uncle, Diego Guerrero, had an important position in the Spanish militia; however, Vicente was opposed to the Spanish colonial government. When his father asked him for his sword in order to present it to the viceroy of New Spain as a sign of goodwill, Vicente refused, saying, The will of my father is for me sacred, but my Fatherland is first. “Mi patria es primero” is now the motto of the southern Mexican state of Guerrero, named in honor of the revolutionary.

He married María de Guadalupe Hernández and their daughter María de los Dolores Guerrero Hernández married Mariano Riva Palacio, who was the defender lawyer of Maximilian I of Mexico in Querétaro, and had Vicente Riva Palacio. 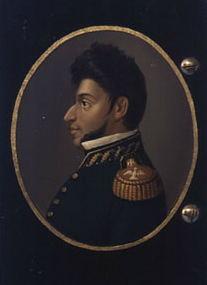 Guerrero joined in the early revolt against Spain in 1810, first fighting alongside José María Morelos. When the War of Independence began, Guerrero was working as a gunsmith in Tixtla. He joined the rebellion in November 1810 and enlisted in a division that independence leader José María Morelos had organized to fight in southern Mexico. Guerrero distinguished himself in the battle of Izúcar, in February 1812, and had achieved the rank of lieutenant colonel when Oaxaca was claimed by rebels in November 1812.

Following the capture and execution of Morelos in late 1815, Guerrero joined forces with Guadalupe Victoria and Isidoro Montes de Oca, taking the position of “Commander in Chief of the rebel troops. He remained the only major rebel leader still at large, keeping the rebellion going through an extensive campaign of guerrilla warfare. He won victories at Ajuchitán, Santa Fe, Tetela del Río, Huetamo, Tlalchapa and Cuautlotitlán, regions of southern Mexico that were very familiar to him.

When Mexico achieved independence, he at first collaborated with Agustín de Iturbide, who proposed that the two join forces under what he referred to as the Three Guarantees or El plan de Iguala. This plan gave civil rights to Indians but not to African Mexicans. Guerrero refused to sign the plan unless equal rights were also given to African Mexicans and mulattos. Clause 12 was then incorporated into the plan. It read: All inhabitants . . . without distinction of their European, African or Indian origins are citizens . . . with full freedom to pursue their livelihoods according to their merits and virtues.

Iturbide and Guerrero eventually agreed on these ideological mandates – that Mexico be made an independent constitutional monarchy, the abolition of class distinctions between Spaniards, creoles, mestizos and Indians, and that Catholicism be made the state religion – earned Guerrero’s support, and, after marching into the capital on 27 September 1821, Iturbide was proclaimed Emperor of Mexico by Congress. However, when Iturbide’s policies supported the interests of Mexico’s wealthy landowners through continued economic exploitation of the poor and working classes, Guerrero turned against him and came out in favor of a Republic with the Plan of Casa Mata. 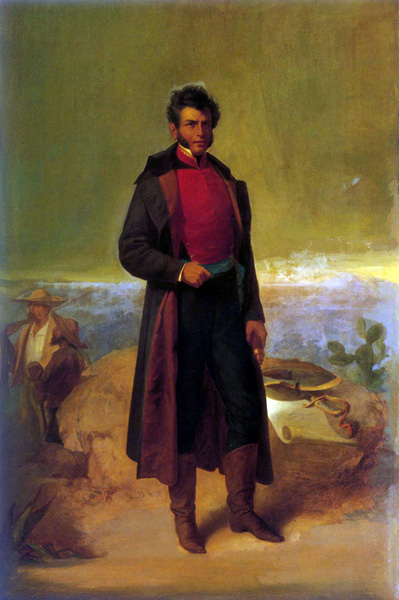 When the general Manuel Gómez Pedraza won the election to succeed Guadalupe Victoria as president, Guerrero, with the aid of general Antonio López de Santa Anna and politicianLorenzo de Zavala, staged a coup d’état and took the presidency on 1 April 1829.

Guerrero, as head of the People’s Party and a liberal by conviction, called for public schools, land title reforms, industry and trade development, and other programs of a liberal nature:

“A free state protects the arts, industry, science and trade; and he only prizes virtue and merit:if we want to acquire the latter,let’s do it cultivating the fields,the sciences, and all that can facilitate the sustenance and entertainment of men: let’s do this in such a way that we will not be a burden for the nation, just the opposite, in a way that we will satisfy her needs, helping her to support her charge and giving relief to the distraught of humanity: with this we will also achieve abundant wealth for the nation, making her prosper in all aspects.”

“….A man who is held up as ostensible head of the party, and who will be their candidate for the next presidency, is General Guerrero, one of the most distinguished chiefs of the revolution. Guerrero is uneducated, but possesses excellent natural talents, combined with great decision of character and undaunted courage. His violent temper renders him difficult to control, and therefore I consider Zavala’s presence here indispensably necessary, as he possesses great influence over the general.”

— Joel R. Poinsett, US minister for Mexico (i.e. Ambassador), about the character of Vicente Guerrero

Guerrero was elected the second president of Mexico in 1829. As president, Guerrero went on to champion the cause not only of the racially oppressed but also of the economically oppressed. The most notable achievement of Guerrero’s short term as president was ordering an immediate abolition of slavery on September 16th of 1829.  and emancipation of all slaves. During Guerrero’s presidency the Spanish tried to reconquer Mexico however the Spanish failed and were defeated at the Battle of Tampico.

Guerrero was deposed in a rebellion under Vice-President Anastasio Bustamante that began on 4 December 1829. He left the capital to fight the rebels, but was deposed by the Mexico City garrison in his absence on 17 December 1829. Guerrero hoped to come back to power, but General Bustamante captured him from his home through bribery and a group of reactionaries had him executed.

Statue in honor of Vicente Guerrero

After his death, Mexicans loyal to Guerrero revolted, driving Bustamante from his presidency and forcing him to flee for his life. Picaluga, a former friend of Guerrero, who conspired with Bustamante to capture Guerrero, was executed.

Honors were conferred on surviving members of Guerrero’s family, and a pension was paid to his widow. In 1842, Vicente Guerrero’s body was returned to Mexico City and interred there. Guerrero’s political discourse was one of civil rights for all. Mexicans with hearts full of pride call him the greatest man of color to ever live.

Guerrero is a Mexican national hero. The state of Guerrero is named in his honour.

Several towns in Mexico are named in honor of this famous general, including Vicente Guerrero in Baja California and the Mexican State of Guerrero, on the mainland of Mexico.