By JOHN NOBLE WILFORD    Published: October 13, 2011
Digging deeper in a South African cave that had already yielded surprises from the Middle Stone Age, archaeologists have uncovered a 100,000-year-old workshop holding the tools and ingredients with which early modern humans apparently mixed some of the first known paint.
These cave artisans had stones for pounding and grinding colorful dirt enriched with a kind of iron oxide to a powder, known as ocher. This was blended with the binding fat of mammal-bone marrow and a dash of charcoal. Traces of ocher were left on the tools, and samples of the reddish compound were collected in large abalone shells, where the paint was liquefied, stirred and scooped out with a bone spatula. 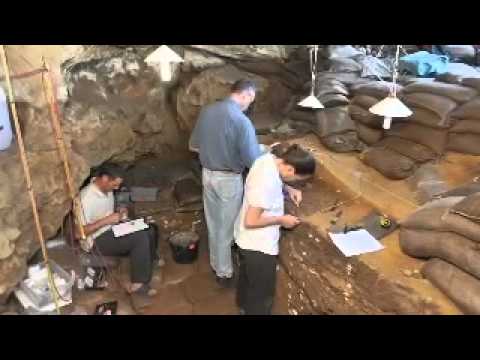 Archaeologists said that in the workshop remains they were seeing the earliest example yet of how emergent Homo sapiens processed ocher, one of the species’ first pigments in wide use, its red color apparently rich in symbolic significance. The early humans may have applied the concoction to their skin for protection or simply decoration, experts suggested. Perhaps it was their way of making social and artistic statements on their bodies or their artifacts.
Of special importance to the scientists who made the discovery, the ocher workshop showed that early humans, whose anatomy was modern, had also begun thinking like us. In a report published online on Thursday in the journal Science, the researchers called this evidence of early conceptual abilities “a benchmark in the evolution of complex human cognition.”

Deposits of 100,000-year-old ocher were found in a shell alongside tools for pounding and grinding paint materials.

The discovery dials back the date when the modern Homo sapiens population was known to have started using paint. Previously, no workshop older than 60,000 years had come to light, and the earliest cave and rock art began appearing about 40,000 years ago. The exuberant flowering among the Cro-Magnon artists in the caves of Europe would come even later; the parade of animals on the walls of Lascaux in France, for example, was executed 17,000 years ago.
The cave people in South Africa were already learning to find, combine and store substances, skills that reflected advanced technology and social practices as well as the creativity of the self-aware.
The paint makers also appeared to have developed an elementary knowledge of chemistry and some understanding of long-term planning earlier than previously thought. 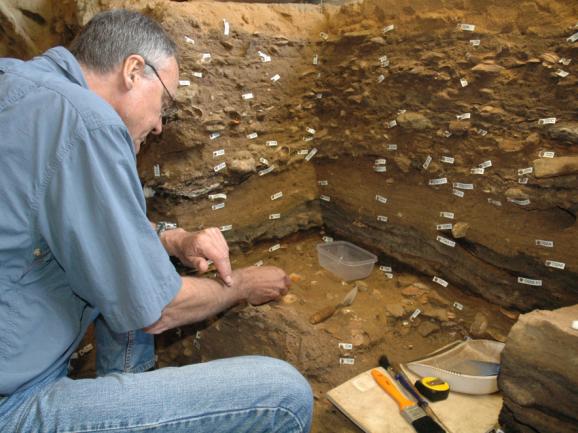 The discovery was made at Blombos Cave, 200 miles east of Cape Town, on a high cliff facing the Indian Ocean at the tip of South Africa. Christopher S. Henshilwood, of the University of Bergen in Norway and the University of Witwatersrand in Johannesburg, led the team of researchers from Australia, France, Norway and South Africa.
Much of the analysis and dating of the material was directed by Francesco d’Errico of the University of Bordeaux in France.
The two clusters of tools and two ocher-filled abalone shells were found in 2008.
But Dr. Henshilwood said in an e-mail that it had taken a great deal of time and repeated testing to determine the age of the material and “make sure that the ocherous-looking deposits on each tool did in fact relate to the substance within the shells.”

Alison S. Brooks, an archaeologist at George Washington University who studies the Middle Stone Age in Africa but was not involved in this research, said, “This is another spectacular discovery from Blombos.”
Archaeologists and other scholars have come to expect the unexpected from Blombos Cave. In the past decade, Dr. Henshilwood’s teams have shaken conventional wisdom by finding persuasive evidence that people living in the cave were taking important strides toward modern behavior. 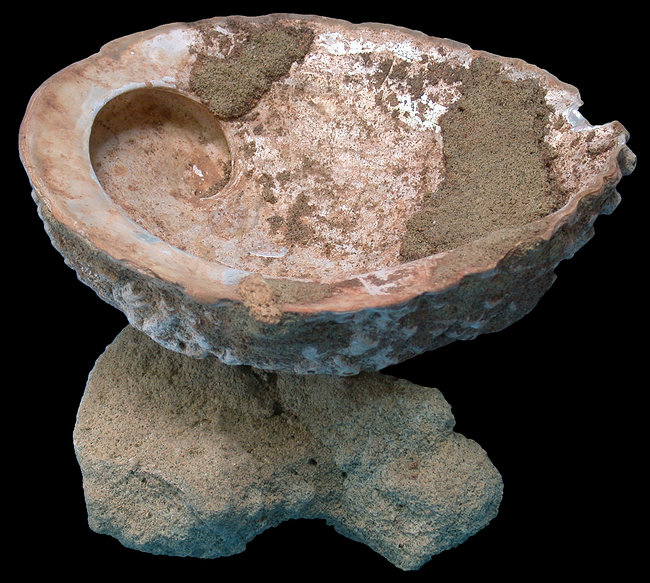 Samples of ocher were collected in large abalone shells, where the first known paint was liquefied, stirred and scooped out with a bone spatula.

The researchers reported in 2001 finding tools there made from animal bones and finely worked stone weapon points. They gathered hundreds of pieces of ocher stone, including two inscribed with crisscrossed triangles and horizontal lines. This was occurring 75,000 years ago, some 40,000 years before the “creative explosion” of self-adornment and cave paintings once thought of as the sudden origin of human self-expression.
At the time of the first Blombos discovery, Dr. Henshilwood said, “We’re pushing back the date of symbolic thinking in modern humans — far, far back.”
And a few years earlier, Dr. Brooks and Sally McBrearty, an anthropologist at the University of Connecticut, published a comprehensive study of various African sites showing, they said, “the gradual assembling of the package of modern human behaviors in Africa and its later export to other regions of the Old World.”
Dr. Brooks noted this week that large quantities of ocher had been found elsewhere in Africa even before the 100,000-year-old workshop.
Recent research has also documented ocher’s early use in Africa as an adhesive to haft small points onto weapon shafts.
“But the Blombos discovery, not only of elaborate ocher processing but also of its mixture with marrow fat to produce a paint, rather than with plant resin to produce a mastic, argues strongly for its symbolic function,” Dr. Brooks said in an interview.
The assumed symbolic role of red ocher, Dr. Henshilwood said, comes from the large amounts of the predominantly red material found at a number of African sites as old as 160,000 years.

It is supposed that the color red relates to blood’s being associated with life and death or menstruation and fertility.
Based on the absence of scattered animal and seafood bones, hearths and other evidence of typical living quarters, the archaeologists said that the ocher artisans did not occupy the cave for long periods.
They came only to work, collecting their hammer stones and grindstones nearby and the chunks of ocher from perhaps as far away as 12 miles.
Inside the cave, the artisans chipped and crushed the soft ocher stones. They may have heated the mammal bones before crushing them, to enhance the extraction of the marrow fat. Then the fat, iron oxide powder, charcoal, stone chips, quartz grains and an unknown liquid were gently stirred in the shells from the abalone they may have feasted on the day before.
Over the years, windblown sand enveloped the workshop, preserving its tools in hardened sediments just below younger layers when life flourished at Blombos Cave and, most likely, it was often painted red.