The college student who got national attention for catching two homerun balls was back in the spotlight at Great American Ball Park.

The Cincinnati Reds made Caleb Lloyd, 20, an honorary captain on Tuesday for the second game of their series against the Atlanta Braves.

He and coach Billy Hatcher took out the line-up card, giving Lloyd a chance to tell his story to the umpiring crew. 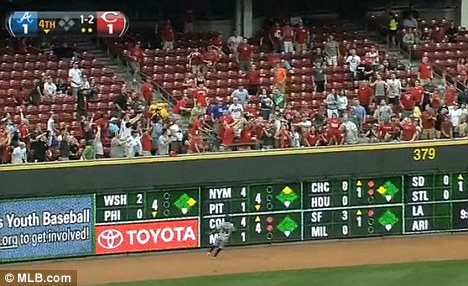 What a catch: The first homerun, hit by Reds pitcher Mike Leake, was caught bare-handed by Caleb Lloyd, a local college student

The videoboard identified him as a ‘Professional Home Run Ball Catcher.’

Mr Lloyd was in the left field stands on Monday night when Reds pitcher Mike Leake and shortstop Zack Cozart hit back-to-back homers – and he caught both of them. 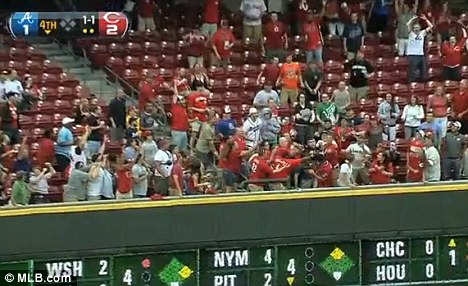 What are the chances? The second homerun took a few bounces in the stands before landing in Lloyd’s outstretched hand

He told MLB.com: ‘It hit my hand. It didn’t expect I’d actually catch it. I never caught a home run ball. I caught it and it like bounced off the palm of my hand, and I just reached out and grabbed it.’

He added:  ‘It hurt really bad. I don’t recommend doing it again.’

Cozart’s homerun bounced around in the stands before falling right in Mr Lloyd’s hand. 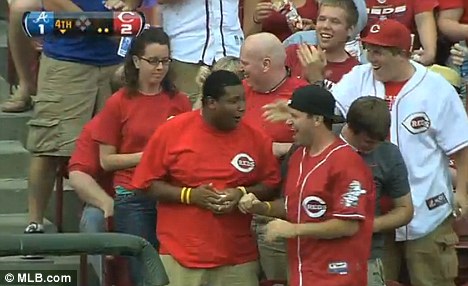 Man of the hour: Mr Lloyd said he was dragged to the game by a friend at the last minute

He later told MLB.com that he originally wasn’t supposed to be at the game in the first place.

Mr Lloyd said: ‘My buddy actually dragged me to the game today. I was playing video games.’

He added: ‘I decided to come to the game and I got two home run balls – it’s pretty special.’ 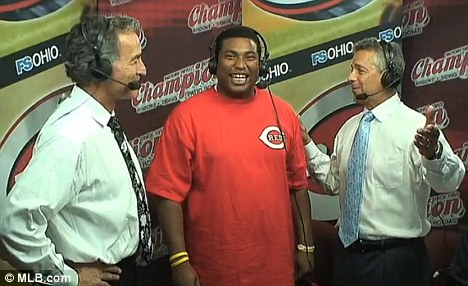 All smiles: Mr Lloyd, pictured in the broadcast booth after his historic catches, says he had never caught a homerun ball in his life before this

Mr Lloyd, a junior at Thomas More College, gave the first ball to Leake as a keepsake and got several autographed items from the pitcher.

Despite the stroke of luck, he claims he’s never caught a homerun ball in his life.

Powered by the two homeruns, the Reds beat the Braves 4-1.