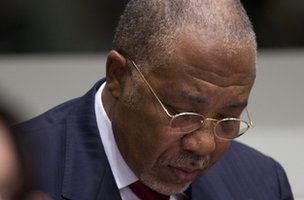 Taylor, a former warlord, was elected president of Liberia in 1997

Taylor, 64, has been on trial in The Hague at the UN-backed Special Court for Sierra Leone for almost five years.

He was accused of backing rebels who killed tens of thousands of people in Sierra Leone’s 1991-2002 civil war.

Taylor was convicted on 11 counts including terror, murder and rape – but cleared of ordering the crimes.

He is the first former head of state convicted by an international court since the Nuremburg military tribunal of Nazis after World War II.

“This is an incredibly significant decision,” Elise Keppler from the campaign group Human Rights Watch told the BBC.

Another group, Amnesty International, said the verdict sent an important message to all high-ranking state officials.

The indictment of Charles Taylor took war crimes jurisprudence to a new level, establishing the principle that a serving head of state was not immune from prosecution.

The later indictments by the International Criminal Court of Sudan’s President Omar al-Bashir and former Ivory Coast leader Laurent Gbagbo of Ivory Coast are a testament to the significance of the Taylor precedent.

Mr Gbagbo, who shares a prison compound in The Hague with Taylor, will undoubtedly feel less sanguine about the outcome of his trial as a result. The same is true of Jean-Pierre Bemba, former vice-president of DR Congo, also on trial at the ICC.

The sight of a convicted defendant facing justice in a courtroom as a contrast to the squalid ends suffered by Saddam Hussein and Muammar Gaddafi is a relief to those who argue the case for the integrity of international war crimes law.

“While today’s conviction brings some measure of justice to the people of Sierra Leone, Taylor and the others sentenced by the Special Court are just the tip of the iceberg,” the group’s Brima Abdulai Sheriff said in a statement.

The US State Department said the ruling sent “a strong message to all perpetrators of atrocities, including those in the highest positions of power, that they will be held accountable”.

Chief prosecutor Brenda Hollis said it was “confirmation of what the people in Sierra Leone told us from the beginning of our investigations, and that is that Mr Taylor was one of those who bore greatest responsibility for the crimes against them”.

But defence lawyer Courtenay Griffiths denied this, saying the verdict was a “major blow to the prosecution” as it had failed to show that Taylor was part of a conspiracy led by Libya to take over West Africa.

The judges, Mr Griffiths added, had also rejected the contention that Taylor was micro-managing events in Sierra Leone.

Reading out the verdict in The Hague, Judge Richard Lussick said Taylor had been found guilty beyond reasonable doubt in connection with 11 counts of war crimes and crimes against humanity.

The judge said the accused had sold diamonds and bought weapons on behalf of the RUF – and knew the rebels were committing crimes.

But Judge Lussick added that this support fell short of effective command and control over the rebels.

“The trial chamber finds the accused cannot be held responsible for ordering the crimes,” he said.

• June 2003: Arrest warrant issued; two months later he steps down and goes into exile to Nigeria

• March 2006: Arrested after a failed escape bid and sent to Sierra Leone

• June 2007: His trial opens – hosted in The Hague for security reasons

• April 2012: Convicted of aiding and abetting the commission of war crimes

He also said the prosecution had failed to prove beyond reasonable doubt that Taylor was part of a joint criminal enterprise.

The BBC’s Mark Doyle in the capital of Sierra Leone, Freetown, says traditional chiefs and victims of the war watching the proceedings by video link breathed a sigh of relief when the verdict was read out.

Victim Jusu Jarkar said said: “This is a happy day. I have not been able to do many things because my arms were cut off, but today I am happy.”

In the Liberian capital Monrovia, newspaper publisher Tom Kamara hailed the verdict, saying “justice has been done” and it was “an end to impunity”.

However young supporters of Charles Taylor took to the streets brandishing placards reading: “We love you Taylor, God willing you will come back.”

A sentence hearing will be held on 16 May, with the sentence to be handed down on 30 May, he added.

Taylor has a right to appeal against the conviction.

If he loses the appeal he is expected to serve his sentence in a British prison, as the Dutch government only agreed to host the trial if any ensuing jail term was served in another country.

Taylor, a warlord in the 1980s and early 1990s, was elected president of Liberia in 1997 following a peace deal than ended a brutal civil war.

He governed for six years before being forced into exile in Nigeria following a second conflict.

In 2006 he was arrested, repatriated to Liberia and eventually sent to The Hague to be tried.

Growing Up Black in Nazi Germany: The Remarkable Life of Hans Massaquoi