The mother of a Christian pastor and an unidentified shooter were shot and killed as afternoon services were finishing in Aurora, Colorado Sunday afternoon.

The drivers of two cars were in a verbal altercation and they pulled into the parking lot of the New Destiny Christian Center where they got out of their cars and continued their fight.

Pastor De Lono Straham’s mother proceeded to go outside of the church to see what was going on and she was shot by one of the men who was arguing. 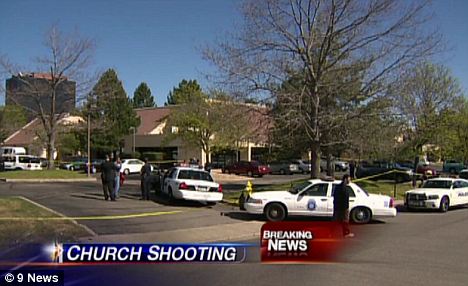 Scene: The shooting took place around 2.45pm on Sunday outside of New Destiny Christian Center in Aurora, Colorado

Police told CBS Denver that one of the cars was chasing the other before the fight broke out.

Local 9 News claims that the drummer from the church was outside and motioned to the pastor’s mother to come to the parking lot.

Eyewitnesses said that ‘several’ rounds were fired before an off duty Denver police officer who was in the congregation ran to the parking lot and shot the suspect dead.

The pastor’s mother, named Josephine Echols, was a nurse and the off duty police officer was the pastor’s cousin.

Pastor Straham confirmed his mother’s death, and said that she was well-liked in the community. Many congregants called her ‘Mother Jo’.

The names of the shooter, who was described as a young African American male, the other man in the fight, the police officer have not been released. 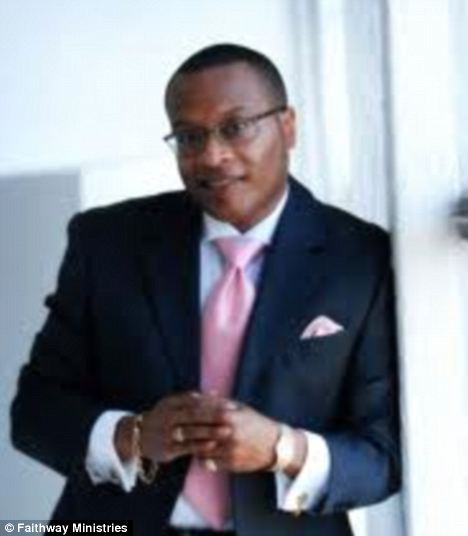 Grieving: Pastor De Lorno Straham confirmed that his mother Josephine Echols was shot and killed outside the Christian Center as he was finishing the service 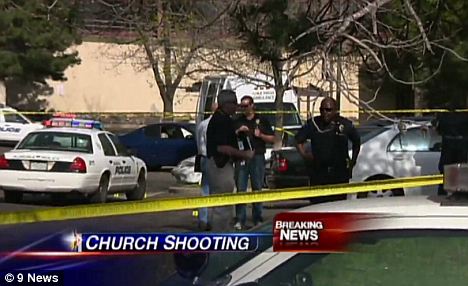 Investigation: The pastor’s mother was shot by a young man who was then shot by the pastor’s cousin who is a Denver policeman but was off-duty

Both Ms Echols and the shooter were taken to a local hospital where they were said to have died.

‘We’re never seen the young man before in our lives,’ said the Center’s spokesperson Yolanda Marant.

People inside the crowded church were confused and scared once they heard someone scream ‘get down’ following the gunshots.

Congregants, including many children, scattered into different rooms in the building in an effort to hide.

Video: Mother stops son's attempt to hold up a convenience store by snatching his toy gun

'Grow' your own STEAKS! Lab breakthrough could see cuts of meat created using 3D printing technology – and they taste just like the real thing