The California Highway Patrol has turned to the public to help identify the men who viciously punched and kicked a man before leaving him unconscious on the side of a Los Angeles freeway.

The video, which has drawn more than 100,000 views on YouTube and other networks, apparently was taken at about 3:30pm on June 12 on a transition road to the northbound Interstate 5, just south of 7th Street, Sgt Denise Joslin said at a news conference.

No arrests had been made and the status of the man who apparently was beaten remained unknown because nobody involved contacted the highway patrol, Sgt Joslin said. 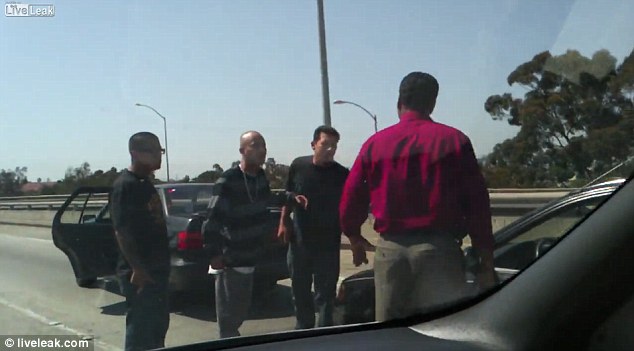 Conflict: The videographer drives up on a transition road to the northbound Interstate 5 as the drivers are arguing 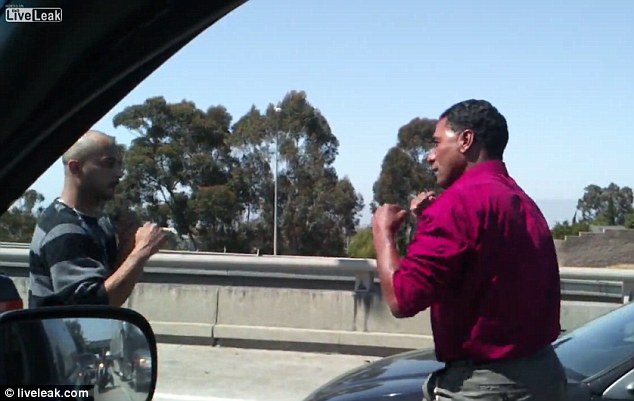 Fight: The camera is rolling as the men put up their fists 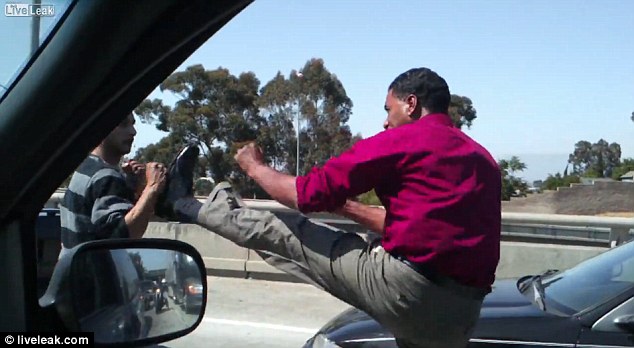 Getting their kicks: The larger of the two men tries to end the fight quickly with a kick, but it’s deflected

KABC-TV, however, identified him as Jerry Patterson but did not say where he lives.

Patterson, who claims to be a military veteran, told the station: ‘As I remember it, I’m trying to get away. They followed me. It got to a point where they blocked me on the freeway.

I couldn’t back up, couldn’t move forward and the guy got out of the car and I got out with him – I wasn’t going to let him walk up on me – and I just defended myself to the best of my ability.’

KABC reported that he said he suffered a concussion and doesn’t remember much of what happened.

‘Twenty-20 hindsight – stay in the car, call authorities. Don’t let your ego get in the way. It’s not worth it,’ he said. 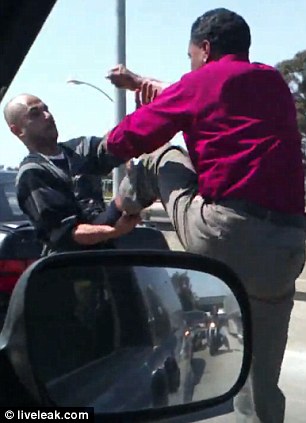 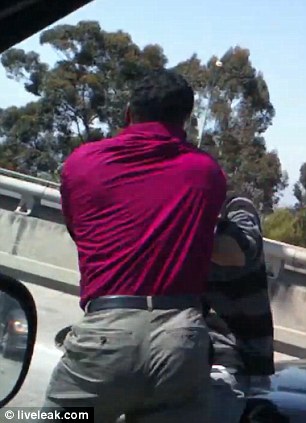 Fracas: Drivers can be heard honking their horns as the melee on the side of the road escalates 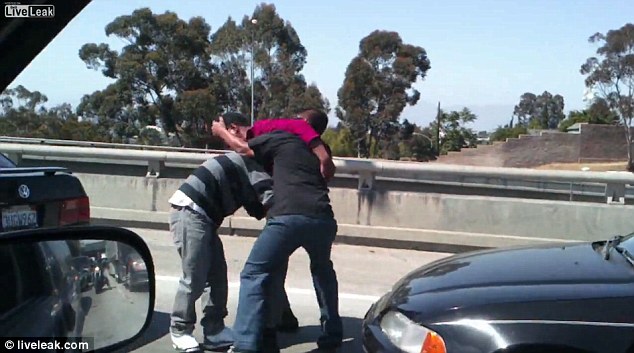 Turning point: The other man gets the upper hand as a friend joins the fight

Officers responded to 911 reports of people fighting on the side of the roadway but when they got there, everyone had left, Joslin said.

Investigators learned of the video on Tuesday and did not know who shot it, Joslin said, adding that it was unclear whether the video was real or staged.

The attackers left in a 1997 Volkswagen Jetta with the license plate 3UGW962, authorities said.

The approximately 2-minute video appears to be taken from inside a car driving on a nearly empty roadway with the Los Angeles skyline in the background. 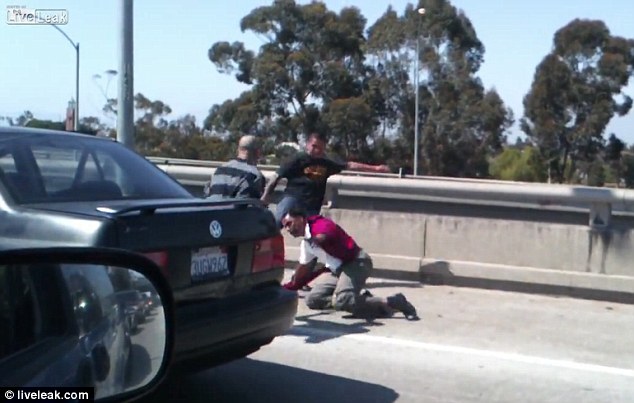 Knockout kick: Mr Patterson appears stunned by a kick to the face by one of the attackers

The car rolls up to where four men are standing next to two cars parked in a lane. They appear to be arguing.

A bald man in a striped sweater and a larger man in a red shirt raise their fists and square off amid repeated calls of ‘Let’s go.’

The larger man kicks at the other man, and they trade punches. A third man then jumps in and helps the bald man pull the red-shirted man to the ground.

They struggle with the flailing man before he appears to be knocked unconscious. 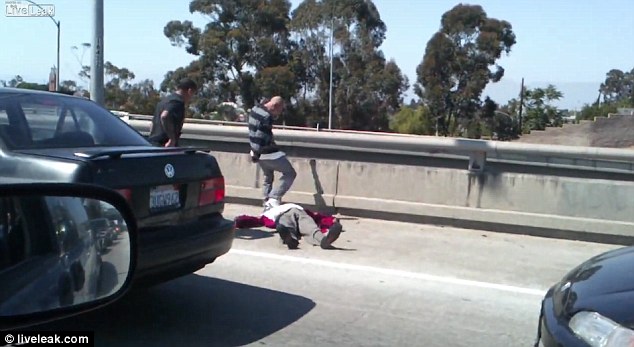 Vicious: As Patterson lies unconscious on the ground, the attackers keep kicking at his head and face 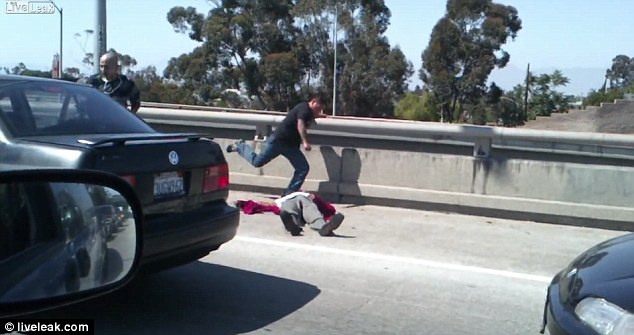 Savage: After one last punishing blow, the attackers get in the car and drive off

Both men then appear to kick him twice in the head before heeding calls to get into a car, which drives off.

Someone then asks the videographer: ‘You take the picture of that?’

The videographer replies that he ‘got the whole thing.’

A few seconds later, the videographer gets out of the car and over to the dazed man, urges him to get up, then hauls him up by one arm. 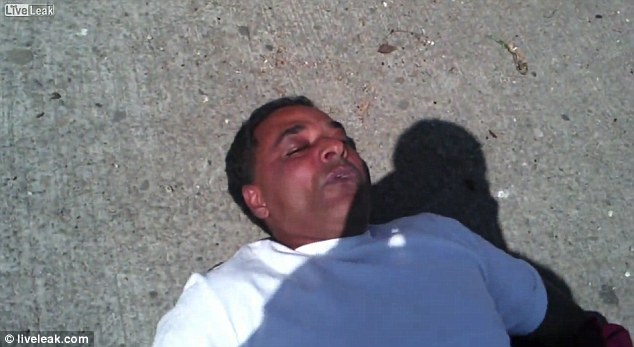 ‘Get up’: The cameraman urges Patterson to stand as he lies on the side of the highway after the attack 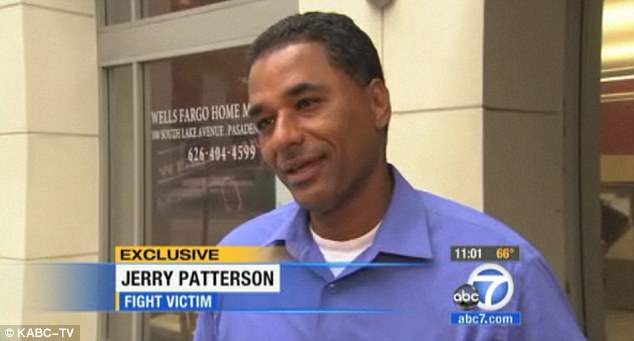 Speaking out: Patterson, who said that he suffered a minor concussion in the attack, said he never should have gotten out of his car

Russia protects itself from refugees and African immigration