Villagers in Malawi are claiming a failed multi-million dollar girls school project financially backed by pop star Madonna has cheated them out of valuable farmland.

More than 200 families in Chinkhota allege they were forced to sell their combined 117 acres of land to government officials to make way for the Material Girl’s state-of-the-art academy.

But the project was beset by spiraling costs, mismanagement and allegations of corruption – collapsing in 2011 with the entire board of her Raising Malawi charity sacked. 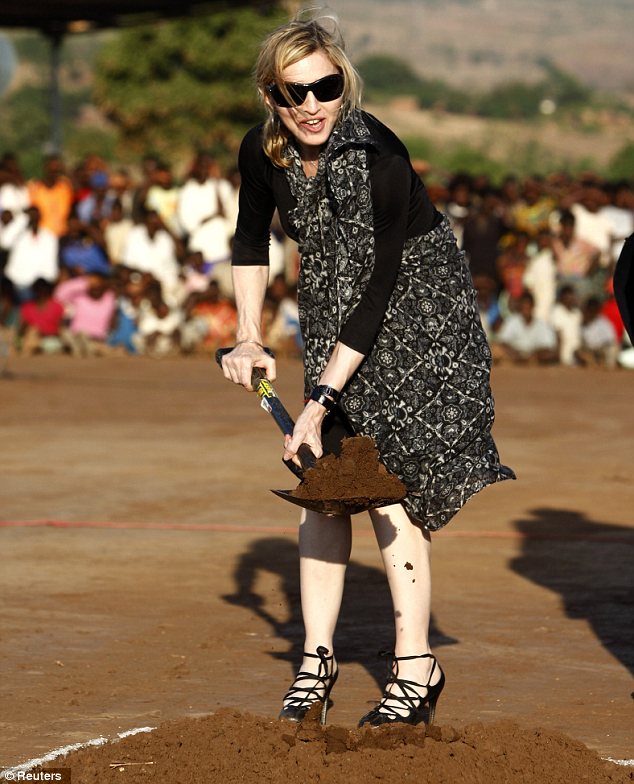 Hope: Madonna turned the soil to lay foundation for her scheme in 2009, but the project later failed 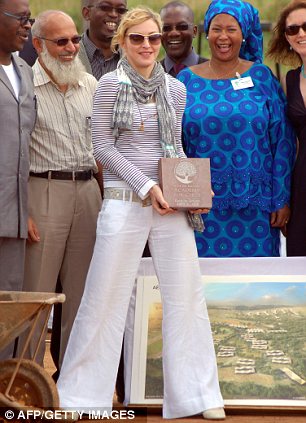 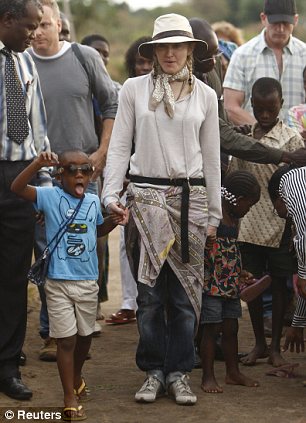 Dreams: Madonna pictured at the laying of the foundation brick for her academy

Madonna, who has adopted two children from the impoverished southern African nation, now wants to open 10 new schools with other partners to educate 1,000 children a year.

But the once productive land from the failed first project, which used to be the ‘bread basket’ of the area, is now said to be useless.

Locals complain they are unable to cultivate their crops and the desolate landscape is now due to be turned into a cemetery for national heroes.

Village headman Chinkhota 1 told Malawi Today: ‘Since the land was taken away from us [by government officials] we have had to put up with a hoard of problems.

‘We were cheated on the issue of compensation while our land was sacrificed because we were told if we did not release it, government would take it anyway without compensation.

‘This left the villagers with no choice.’ 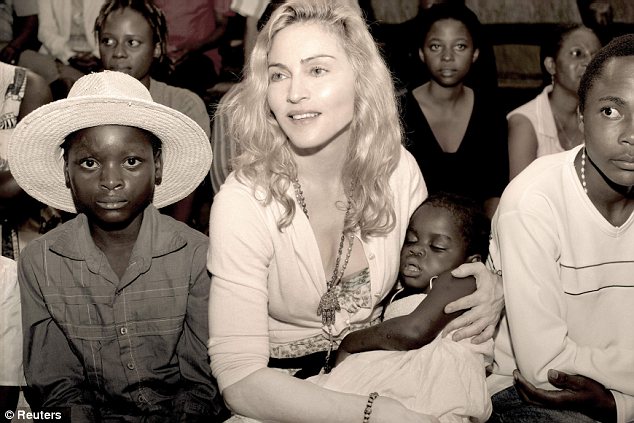 Material girl: Pop star Madonna with Mercy before she formally adopted her in Malawi in 2009 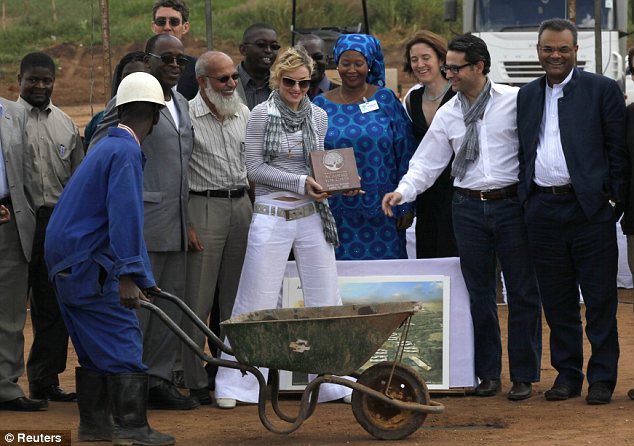 Future: Madonna, who has adopted two children from the impoverished southern African nation, now wants to open 10 new schools with other partners to educate 1,000 children a year

He said he regretted the decision to bring the project, inspired by the U.S. singer who adopted David Banda and Mercy James in 2006 and 2009 from the nation, to his area.

There has also been claims that government officials pocketed millions of kwacha by inflating the figures in the process of compensation, added the report.

The villagers blame Lilongwe District Council, and not Madonna herself, for the collapse of the $3.8million project. 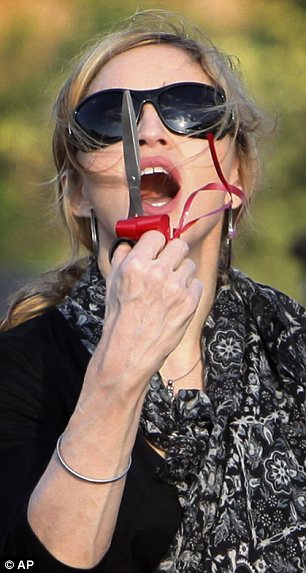 History: Madonna gestures after cutting the ribbon at the ground breaking ceremony for the Raising Malawi Academy for Girls in October 2009

But District Commissioner Paul Kalilombe said the confusion at the start of the project, with different agencies giving different valuations for the land for compensation, was responsible.

He told Malawi Today: ‘The process was done in a transparent manner as all key stakeholders including the villagers were briefed on the exercise.

‘The villagers might have felt aggrieved and cheated because initially procedures were not followed.

‘Raising Malawi initially dealt with the villagers directly and the prices quoted for the land were indeed relatively higher.’

But he added that, as soon as it was made clear the land was ‘part of the city planning area thus under the jurisdiction of government’, then the Department of Lands also became involved in the assessment.

He added: ‘It is true the figures calculated using government guidelines were not in tandem with what the villagers had quoted Raising Malawi earlier.

‘The Anti-Corruption Bureau took up the matter but we have not had any feedback on the progress nor the results of the investigation.

‘No council officials have been charged or convicted. To make it clear, it was the Department of Lands that came up with the figures and not Lilongwe District Council.’

And he revealed that the villagers would not be getting their land back.

He said: ‘In agreeing to receive compensation, the villagers waived their rights to the land and a lease document was issued in favour of Raising Malawi.

‘It was assumed that the compensation would be used to acquire alternative land or a means of survival for the villagers.’

The ACB said it had concluded its investigations, with spokesman Egrita Ndala saying: ‘The file at the moment is with the Bureau’s Prosecutions and Legal Section for them to issue a legal opinion on the investigations team’s findings and recommendations.

‘The Bureau cannot divulge the findings of the investigations at this point as the information is not yet in the public domain. Suffice to say that the matter is being given required attention by the Anti-Corruption Bureau.’ 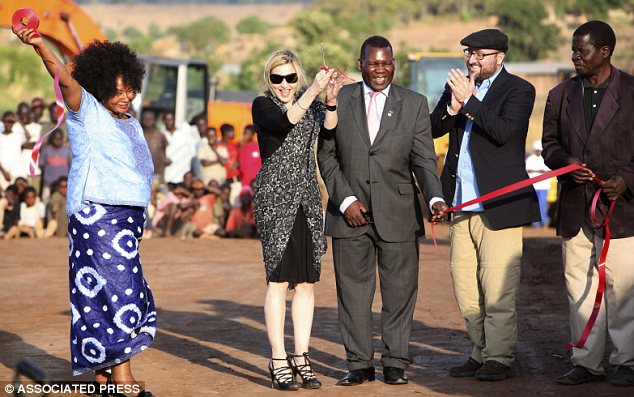 Claims: Villagers said that they were ‘conned’ out of compensation money when they handed over their land to the project

Madonna announced last year that Raising Malawi, whose charity organisation she founded alongside Michael Berg in 2006, would no longer build the academy she had promised.

She will now build 10 new schools to educate at least 1,000 children a year – half of them girls.

Her Raising Malawi charity will team up this time with the non-profit group buildOn, which has constructed 54 primary schools in Malawi in the last 19 years.

In a statement, she said in January: ‘I am excited that with the help of buildOn, we can maintain our ongoing commitment to move forward efficiently.

‘We will now be able to serve twice as many children as we would have served with our old approach.

‘I have learned a great deal over the last few years and feel confident that we can reach our goals to educate children in Malawi, especially young girls, in a much more practical way.

‘Constructing smaller schools in partnership with buildOn has restored my faith that we can accomplish what we promised we would.’

Malawi has more than half a million children orphaned by the AIDS epidemic and is ranked by the United Nations as one of the world’s 20 least developed countries.