“Voices of Strength” isn’t a new motivational speaker series, but rather a new festival focusing on contemporary dance and theater by five female African artists. An American tour, organized by MAPP International Productions, has, as the curator Cathy Zimmerman points out, brought artists to the United States whose works are largely unknown here. 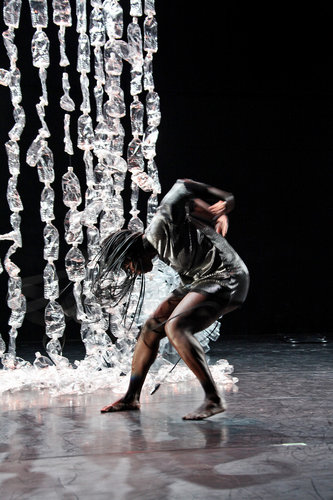 Two of the four productions have already been performed in New York: Kettly Noël and Nelisiwe Xaba’s “Correspondances” and Bouchra Ouizguen’s “Madame Plaza.” On Tuesday evening at New York Live Arts, “Correspondances” was paired with “Quartiers Libres,” a solo by Nadia Beugré. On Friday and Saturday two more perspectives on African dance will be on display, in “Madame Plaza” and Maria Helena Pinto’s “Sombra.”

“Correspondances,” from 2007, uses friendship as a frame, specifically the sisterly bond that many girlfriends share — imagine an ominous “Sex and the City” — to comment on how culture mixes in with race and gender. It’s an amusing piece of dance-theater, full of satirical wit, and, best of all, it features two splendid performers: Ms. Noël, who is from Haiti and now lives in Mali, and Ms. Xaba, a South African.

The opening setup showcases Ms. Xaba stretching and kicking her legs from side to side as she talks us through her morning routine. When she leaves the house, she must be sure that “when a man turns his head, he has something good to look at.”

Ms. Noël, carrying a suitcase, rushes to the stage from the back of the theater, kissing audience members along the way. Later, in a speech, she states, “I love money.” In Africa, Ms. Noël continues, it affords many things: little boys, little girls, babies, love and diamonds.

Throughout “Correspondances” Ms. Xaba and Ms. Noël undercut despair with humor — friendly hip bumps turn ferocious, yet the scene is more funny than violent. While the production is the program’s more polished offering, it also suffers from an overworked, formulaic structure of movement alternating with text.

In the more rambling but gutsier 2010 “Quartiers Libres,” Ms. Beugré, who is from Ivory Coast, is confrontational in her quest for personal freedom. She is first spotted seated with the audience.

Singing a song, she gradually makes her way to the stage, which features a curtain created from plastic water bottles. Dressed in a silver mini-dress, with a microphone coiled around her neck like a necklace, she undergoes transformations: powerful, whipping stomps become staggering steps as her movement becomes more frenetic. Soon the cord, tangled and twisted, is wrapped around her throat like a noose.

The house lights are brought up as Ms. Beugré, dripping with sweat, ventures into the audience to stare imploringly at two women; a third gingerly and deftly removes the cords.

This is misery magnified, and Ms. Beugré — so committed — makes the scene seem more like real life than theater. For her final, flailing dance, she dons a bubble dress made of plastic bottles and crashes flat on her back.

It’s harrowing, both in action and sound; Ms. Beugré knows how to make a crowd trust her just as, in a split second, she knows how to knock the air out of people. She’s wild, like the wind.

Martin Luther King, "Why I Am Opposed to the War in Vietnam"