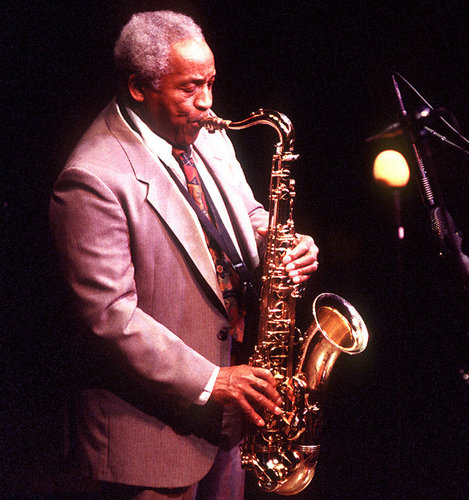 Von Freeman, who was considered one of the finest tenor saxophonists in jazz but attained wide fame only late in life, died on Aug. 11 in Chicago. He was 88.

The cause was heart failure, his son Mark said.

Though his work won him ardent admirers, Mr. Freeman, familiarly known as Vonski, was for decades largely unknown outside Chicago, where he was born and reared and spent most of his life.

As The Chicago Tribune wrote in 1998, his playing “represents a standard by which other tenor saxophonists must be judged.”

Last year, Mr. Freeman was named a National Endowment for the Arts Jazz Master, the nation’s highest honor in the field.

Not until the 1980s did he begin performing more often on famous out-of-town stages, including Alice Tully Hall and the Village Vanguard in New York. Earlier in his career Mr. Freeman had made much of his living, as he told The Tribune, playing for “strip joints, taxi dances, vaudeville shows, comedians, jugglers, weddings, bar mitzvahs, jazz clubs, dives, Polish dances, Jewish dances, every nationality.”

If he never got his big break as a young player, Mr. Freeman said, then that was because he never especially sought one.

“I’m not trying to brag or nothing, but I always knew I could play, 50, 60 years ago,” he told The Tribune in 2002. “I really don’t play any different than the way I played then. And I never let it worry me that I didn’t get anywhere famewise, or I didn’t make hit records.”

What he preferred to chasing fame, he said, was playing jazz as he felt it demanded to be played. The result, critics agreed, was music — often dazzling, occasionally bewildering — that sounded like no one else’s.

Mr. Freeman’s playing was characterized by emotional fire (he was so intense he once bit his mouthpiece clean off); a huge sound (this, he said, took root in strip clubs where the band played from behind a curtain); and singular musical ideas.

His work had a daring elasticity, with deliberately off-kilter phrasing that made it sound like speech. He cherished roughness and imperfection, although, as critics observed, he could play a ballad with the best of them.

Where some listeners faulted him for playing out of tune, others praised him for exploiting a chromatic range far greater than the paltry 12 notes the Western musical scale offers.

“Don’t tune up too much, baby,” Mr. Freeman once told a colleague. “You’ll lose your soul.”

His masterly tonal control let him summon unlovely sounds whenever he chose to, and he chose to often. His timbre has been called wheezing, honking, rasping and, in the words of Robert Palmer of The New York Times in 1982, a “billy goat tone” — a description that, as context makes clear, was not uncomplimentary.

Earl LaVon Freeman was born in Chicago on Oct. 3, 1923. (His given name was occasionally spelled Earle.)

His father was a city policeman — a highly unusual job for a black man then — whose beat included the Grand Terrace Ballroom, a storied nightclub. There, Von soaked up the music of Louis Armstrong, Fats Waller, Earl Hines and other titans of the age.

Young Von pined for a horn, and as luck would have it there was one in the house. The fact that it was attached to his father’s Victrola did not deter him, and one day when he was about 7, he pried it off, drilled holes in it and began to blow.

Deplorable sounds ensued, and his father overheard. “He picked me up, just kind of shook me, then hardly spoke to me for about a year,” Mr. Freeman later told Down Beat magazine. But if only as a deterrent, his father bought him a saxophone.

By 12, Von was playing professionally in Chicago nightclubs, reporting for work armed with a note from his mother. It read, “Don’t let him drink, don’t let him smoke, don’t let him consort with those women, and make him stay in that dressing room.”

He graduated from DuSable High School, a public school famous for its jazz program (other alumni include Nat King Cole and Dinah Washington), and entered the Navy, playing in its jazz band.

After his discharge, Mr. Freeman resumed his career, sitting in with some of the finest musicians to appear in Chicago, including Dizzy Gillespie, Charlie Parker and John Coltrane.

He was often invited to join them on the road, but he turned most offers down. He was disinclined to leave home: besides his wife and four children, he had his mother to look after. She had been widowed since Von was a young man, when his father was shot and killed in the line of duty.

In later years, Mr. Freeman played at jazz festivals throughout the United States and Europe. But despite his newfound fame, till nearly the end of his life held court each Tuesday night at the New Apartment Lounge, a small Chicago club where he had performed since the early 1980s. “Vonski’s Night School,” musicians called his sessions there, and young players came from around the world for the chance to sit in with him.

Mr. Freeman’s marriage to Ruby Hayes ended in divorce. Besides his son Mark, he is survived by another son, Chico, a prominent tenor saxophonist, and a brother, George, a jazz guitarist. Two daughters, Denise Jarrett and Brenda Jackson, died before him, as did another brother, Eldridge (known as Bruz), a drummer.

Though Mr. Freeman had not looked for it, renown, when it came, was a vindication.

“A lot of people who didn’t pay a lot of attention to me or to my music started coming around when I was heading to my 80th birthday,” he told The Tribune in 2002. “Now they were saying, ‘Well, Vonski, you’re all right after all.’ ”

Jay Z breaks his silence over Barneys furor, says he's 'no stranger to being profiled'