Health Diet and Fitness
August 27, 2013 Ro Ho 0 Comments
By Melissa Healy    August 26, 2013,4:55 p.m.
News flash: Some overweight and obese women work harder to get healthy when they’re not ordered to lose weight, but told their current body shape is fine and that maintaining it is an acceptable goal.
The women on whom this approach has most recently shown promise are younger African American women whose body mass index falls between 25 and 35, placing them in the overweight-to-moderately obese category. In a study published Monday in the journal JAMA Internal Medicine, these women tended to stay at their weight or even lose a few pounds when they were assigned to a “shape-maintenance” program. Meanwhile, a comparison group of African American women received “usual care” — they were sent a biannual “wellness” newsletter that did not discuss weight, nutrition or exercise.
The “Shape program” designed by the study team explicitly tells women that the aim is to improve their overall well-being and to maintain their current body shape. By setting modest goals for behavior change, encouraging more exercise with a gym membership and providing some cheerleading and counseling for women enrolled in it, the program aims to shave a woman’s daily energy-balance by about 200 calories. That could be expected to break the pattern of 1 kilogram (roughly 2.2 pounds)-per-year weight gain that is typical for pre-menopausal African American women — a rate of weight gain higher than that of women in any other racial or ethnic group. 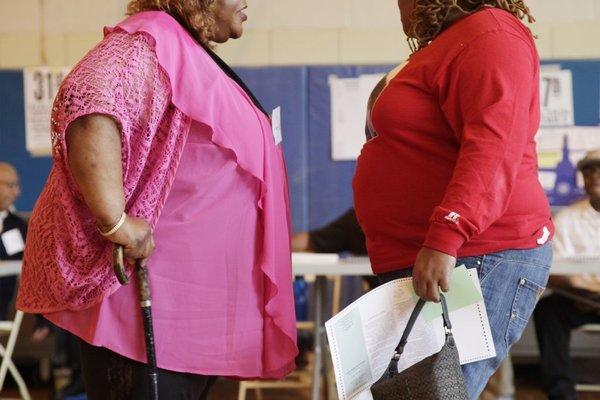 A new study finds that preventing further weight gain may be the best health-promotion strategy for African-American women who are overweight or moderately obese. (Mark Lennihan / August 15, 2013)

The Shape program is thought to be particularly well-suited to African American women for several reasons. For starters, African American women are far less likely than men or women of other races or ethnicities to respond to weight-loss programs with meaningful weight loss. Compared to white women, they report higher levels of body-satisfaction and less social pressure to lose weight.
And finally, there’s some evidence that a moderate amount of excess weight is not as corrosive to African Americanwomen’s health as it is to that of obese men or white women. But because rapid weight gain before menopause is common, the incidence of extreme obesity — which clearly does increase risk of Type 2 diabetes and cardiovascular disease in African American women — is very high. For that reason, just halting the run-up in weight that is common in this group could be a powerful health-promotion strategy.
After a year in the Shape program, the African American women between the ages of 25 and 44 years old had, on average, dropped a kilogram, whittled about a centimeter from their waist circumference and slightly improved theirblood pressure, cholesterol readings, triglycerides and fasting glucose levels. The study participants who received “usual care” had gained an average of about a pound.
In an editorial published alongside the study, former Surgeon General Regina M. Benjamin touted the Shape program as being both “culturally sensitive” and “more likely to be feasible in clinical practice” than costly and intensive “lifestyle-modification” programs. But whether halting weight gain and fostering marginal weight loss will be enough to yield long-term health benefits remains to be shown, she added.
Dr. Benjamin wrote that the shape program’s combination of nutritional and exercise-counseling and its community component — providing a free membership to the local YMCA – -may be the right combination of social and clinical encouragement for health promotion.
“Providing clinical and community approaches may offer the best hope for helping our nation’s citizens achieve and maintain a healthy weight,” wrote Benjamin.

Why does Africa have such a high rate of the disease?