The earliest writing ever seen may have been discovered in southern Egypt. The hieroglyphics record linen and oil deliveries made over 5,000 years ago.
The find challenges the widely-held belief that the first people to write were the Sumerians of Mesopotamia (modern-day Iraq) sometime before 3000 BC.
The exact date of Sumerian writing remains in doubt but the new Egyptian discoveries have been confidently dated to between 3300 BC and 3200 BC using carbon isotopes. 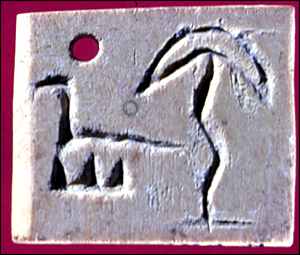 “It was thought that Sumerians were earlier in writing than Egypt,” said Gunter Dreyer, director of the German Archaeological Institute in Egypt.
“With our findings, we now see it’s on the same level and this is an open question: was writing invented here or there?”
It was possible that Sumerians who traded with Egypt copied their inscriptions, Dr Dreyer said. “But we have to wait for further evidence,” he warned, saying publication of his results would appear in early 1999. 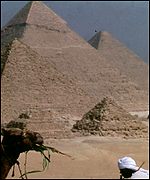 Momentous find
Archaeological experts hailed the find as momentous. “This would be one of the greatest discoveries in the history of writing and ancient Egyptian culture,” said Kent Weeks, Professor of Egyptology at the American University in Cairo.
Describing Mr Dreyer as a “very meticulous scholar,” Professor Weeks said the German archaeologist would not have disclosed his findings without being “absolutely certain.”
The writings are line drawings of animals, plants and mountains and came mainly from the tomb of a king called Scorpion in a cemetery at Abydos, about 400 km (250 miles) south of Cairo.
Since 1985, Mr Dreyer and his team have unearthed about 300 pieces of written material on clay tablets barely bigger than postage stamps.
Clay jars and vases also display the documentary records of linen and oil delivered to King Scorpion I as taxes. Two-thirds of the hieroglyphics have been deciphered, including short notes, numbers, lists of kings’ names and names of institutions.
The newly discovered Egyptian writings also show that the society then was far more developed than previously thought, Dreyer said.
He said man’s first writings were not a creative outpouring but the result of economics: when chieftains expanded their areas of control they needed to keep a record of taxes. Although the Egyptian writings are made up of symbols, they can be called true writing because each symbol stands for a consonant and makes up syllables.
http://news.bbc.co.uk/2/hi/science/nature/235724.stm