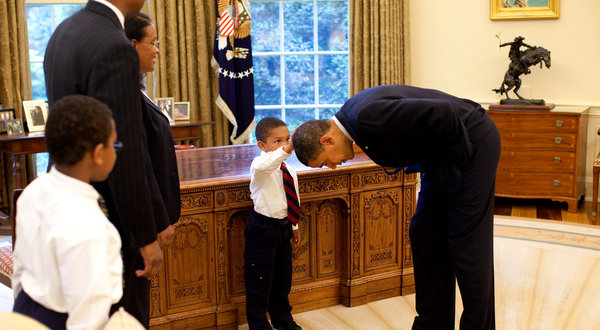 In the photo that has hung in the West Wing for three years, President Obama looks to be bowing to 5-year-old Jacob Philadelphia, his arm raised to touch the president’s hair — to see if it feels like his.

WASHINGTON — For decades at the White House, photographs of the president at work and at play have hung throughout the West Wing, and each print soon gives way to a more recent shot. But one picture of President Obamaremains after three years.

In the photo, Mr. Obama looks to be bowing to a sharply dressed 5-year-old black boy, who stands erect beside the Oval Office desk, his arm raised to touch the president’s hair — to see if it feels like his. The image has struck so many White House aides and visitors that by popular demand it stays put while others come and go.

As a candidate and as president, Mr. Obama has avoided discussing race except in rare instances when he seemed to have little choice — responding to the racially incendiary words of his former pastor, for example, or to the fatal shooting of an unarmed black teenager in Florida. Some black leaders criticize Mr. Obama for not directly addressing young blacks or proposing policies specifically for them.

Yet the photo is tangible evidence of what polls also show: Mr. Obama remains a potent symbol for blacks, with a deep reservoir of support. As skittish as White House aides often are in discussing race, they also clearly revel in the power of their boss’s example.

The boy in the picture is Jacob Philadelphia of Columbia, Md. Three years ago this month, his father, Carlton, a former Marine, was leaving the White House staff after a two-year stint on the National Security Council that began in the Bush administration. As departing staff members often do, Mr. Philadelphia asked for a family photograph with Mr. Obama.

When the pictures were taken and the family was about to leave, Mr. Philadelphia told Mr. Obama that his sons each had a question. In interviews, he and his wife, Roseane, said they did not know what the boys would ask. The White House photographer, Pete Souza, was surprised, too, as the photo’s awkward composition attests: The parents’ heads are cut off; Jacob’s arm obscures his face; and his older brother, Isaac, is blurry.

“I want to know if my hair is just like yours,” he told Mr. Obama, so quietly that the president asked him to speak again.

Jacob did, and Mr. Obama replied, “Why don’t you touch it and see for yourself?” He lowered his head, level with Jacob, who hesitated.

“Yes, it does feel the same,” Jacob said.

(Isaac, now 11, asked Mr. Obama why he had eliminated the F-22 fighter jet. Mr. Obama said it cost too much, Isaac and his parents recounted.)

In keeping with a practice of White House photographers back to Gerald R. Ford’s presidency, each week Mr. Souza picks new photos for display. That week, Jacob’s easily made the cut.

“As a photographer, you know when you have a unique moment. But I didn’t realize the extent to which this one would take on a life of its own,” Mr. Souza said. “That one became an instant favorite of the staff. I think people are struck by the fact that the president of the United States was willing to bend down and let a little boy feel his head.”

David Axelrod, Mr. Obama’s longtime adviser, has a copy framed in his Chicago office. He said of Jacob, “Really, what he was saying is, ‘Gee, you’re just like me.’ And it doesn’t take a big leap to think that child could be thinking, ‘Maybe I could be here someday.’ This can be such a cynical business, and then there are moments like that that just remind you that it’s worth it.”

A copy of the photo hangs in the Philadelphia family’s living room with several others taken that day. Mr. Philadelphia, now in Afghanistan for the State Department, said: “It’s important for black children to see a black man as president. You can believe that any position is possible to achieve if you see a black person in it.”

Jacob, now 8, said he indeed does want to be president. “Or a test pilot.”