The father of a black girl has moved out of his apartment in Cincinnati after his landlord posted a ‘White Only’ sign by the pool, that he believed was aimed at his 10-year-old daughter.

Michael Gunn, who is white, was outraged and said to have suffered emotionally and financially from the incident.

A judge is currently weighing penalties against landlord Jamie Hein that could include punitive and compensatory damages. Gunn testified on Friday, but a ruling is not expected for months. 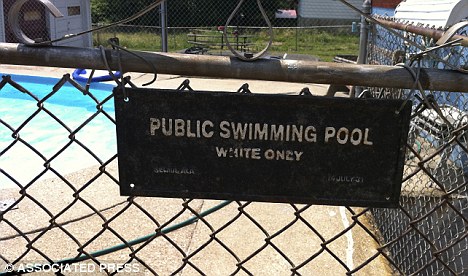 Outrage over this sign: a ‘white only’ sign was placed by the pool of a Cincinnati apartment complexl, targeting a 10-year-old black girl

Hein claimed that that hair products used by the 10-year-old girl clouded the pool. She wasn’t present at Friday’s hearing and a recording said her voicemail was full.

An Ohio civil rights commission earlier ruled that Hein, a white woman, discriminated against the girl by posting that sign. The state has said Hein gave up her right to challenge the discrimination ruling by failing to respond to earlier case filings.

Gunn said his daughter lives with her mother but often visits him and had gone swimming in the pool on Memorial Day weekend in 2011.

He said Hein sent him a text message shortly afterward, accusing his daughter of clouding the pool and saying she would have to shower before entering it and wear a swim cap.

A few days after that, Gunn said he went to the pool and saw the iron sign stating ‘Public Swimming Pool, White Only.’ 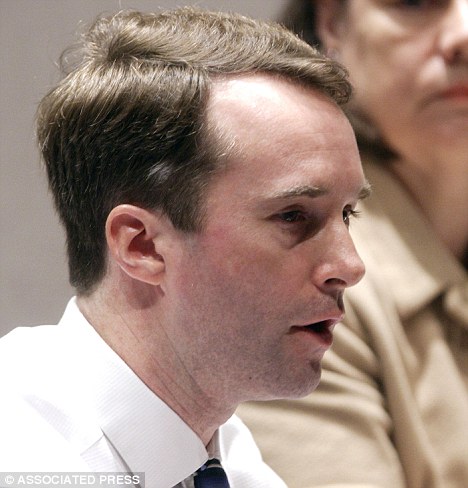 Protecting his daughter: Michael Gunn testifies in court, saying he suffered damage after a ‘white only’ sign was placed

Gunn said he was so angry his hands were shaking.

He decided he had to move to protect his daughter and was not about to let her see the sign or risk having Hein upset her.

‘I did not want her to think that there were people like this or have her think that just because she wasn’t white, people would think less of her,’ Gunn told the administrative law judge.

Gunn also testified that he incurred costs from moving, lost work time and higher rent in addition to the emotional stress. His primary concern, though, was his daughter’s safety.

‘She shouldn’t have to think about the color of her skin in relation to what people think about her,’ he said.

‘It’s not just a personal issue,’ Brown said. ‘An outrageous action like this is another hit on the city’s reputation.’

Cincinnati was the scene of race riots in April 2001 when police and demonstrators clashed following the shooting of a black suspect by police.

Civil Rights Section Chief Lori Anthony with the Ohio Attorney General’s Office told the judge that damages are being sought “to send a clear message that racial discrimination in housing will not be tolerated.”

Why are there so few black female stars with darker skin?