South African police say they have foiled a plot to bomb a conference attended by President Jacob Zuma and dozens of top government officials.

Four men aged between 40 and 50 were arrested on Sunday it has today been confirmed.

A police spokesman said there was evidence they were planning acts around the country and not just at the African National Congress (ANC) meeting in the central city of Bloemfontein. 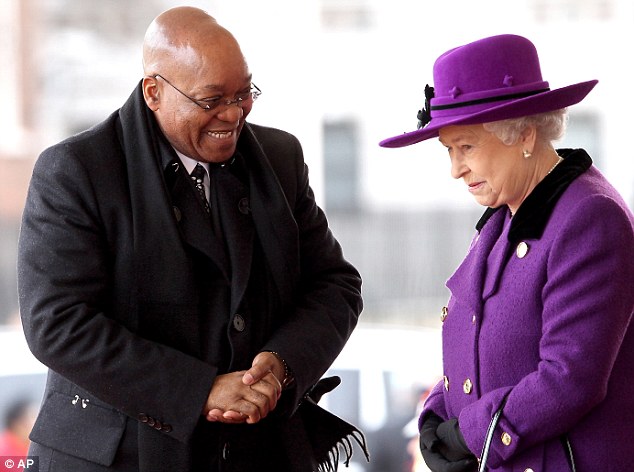 South African President Jacob Zuma, pictured here with the Queen during a ceremonial welcome, is believed to have been a target in a suspected bomb plot 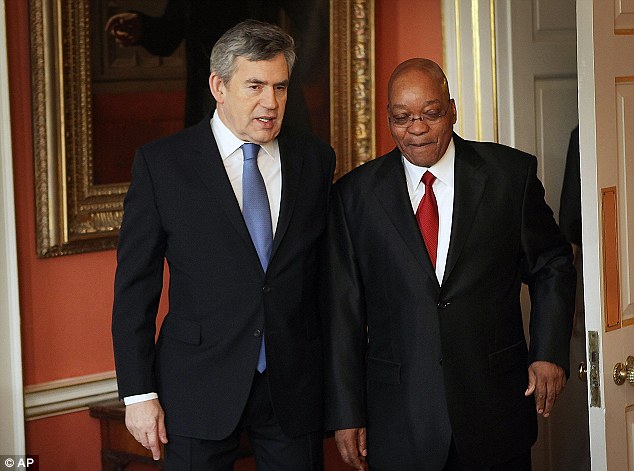 Four men aged between 40 and 50 were arrested on Sunday it has today been confirmed. Zuma, is pictured here with former Prime Minister Gordon Brown

The vast majority of South Africa’s whites accepted the ANC’s victory in the 1994 election that brought Nelson Mandela to power and ended decades of white-minority rule.

However, a tiny handful continues to oppose the historic settlement.

Police spokesman Billy Jones said: ‘Their acts are widespread. We arrested them in different provinces.’

ANC spokesman Keith Khoza said preliminary information suggested the men were planning to bomb the marquee where Zuma and 4,500 delegates are holding a five-day meeting to chose the ANC’s leadership for the next five years.

He said: ‘This would have been an act of terrorism that South Africa can ill afford.’

The Federal Freedom Party (FFP), a fringe group fighting for self-determination for the white Afrikaner minority, confirmed two of those arrested were FFP members but denied any role in the suspected plot.

‘We were not involved and do not associate ourselves with their actions,’ FFP national secretary Francois Cloete said.

In July, a former university lecturer was found guilty of orchestrating a 2002 plot to overthrow the ANC and assassinate Mandela – now 94 and receiving treatment in a Pretoria hospital for a lung infection.

There was a heavy security presence at the Bloemfontein meeting and the few vehicles being allowed onto the university campus hosting the event were being searched by police and sniffer dogs.

The conference is set to give Zuma a second mandate to lead the party and – given the ANC’s dominance at the ballot box – another five-year term in 2014 as president of Africa’s biggest economy.

Zuma’s nomination for the post of party leader was met by wild cheers from delegates, in marked contrast to the muted applause and occasional whistle that greeted his only challenger, Deputy President Kgalema Motlanthe. 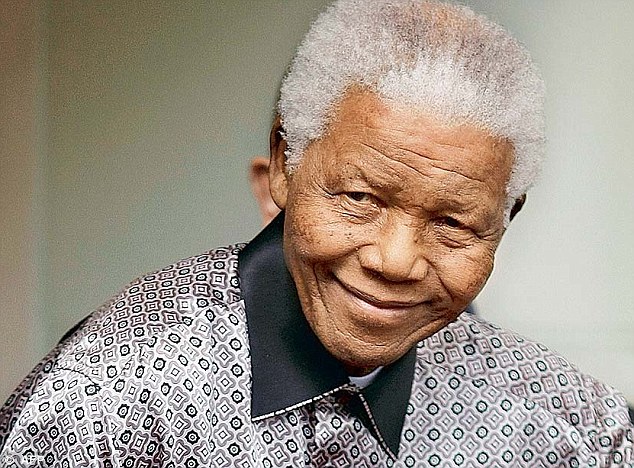 In July, a former university lecturer was found guilty of orchestrating a 2002 plot to overthrow the ANC and assassinate Mandela now 94 and receiving treatment in a Pretoria hospital for a lung infection

Ramaphosa supporters said they were confident of victory when results of the internal election are announced on Tuesday.

‘The numbers are in our favour and we are going for it,’ said one backer said. ‘It’s almost a done deal. Cyril is going to be our next deputy president.’

The ascension of Ramaphosa to a top ANC position is likely to be seen as a pro-business move by a party still deeply rooted in socialism, and may help assuage the fears of the ratings agencies that have recently downgraded South Africa.

Zuma’s administration has been criticised for failing to overhaul a rigid labour market or fix a broken education system that is eroding the long-term competitiveness of Africa’s biggest economy.

There are also concerns the ANC might push for new taxes for mining firms to help the government finance welfare spending for the millions of blacks who have seen few economic gains since the end of apartheid.

However, Deputy Finance Minister Nhlanhla Nene said the government would not be ‘reckless’ in implementing new taxes. He also accused the ratings agencies of political meddling.

‘There has actually been some level of unfairness because if you look at what was coming out of the ratings agencies, it was somewhat of an attempt to influence the outcome of the conference,’ he told a business forum on the sidelines of the ANC meeting.