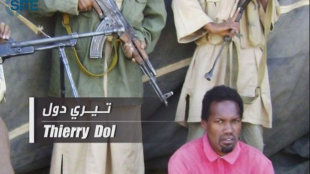 This image released by the SITE Intelligence Group on April 27, 2011 shows Thierry Dol, one of four French hostages …

Despite recent successes such as the killing of Osama bin Laden last May, U.S. counter-terrorism officials are increasingly concerned about al-Qaida affiliates extending their influence among Islamic populations. These groups typically find fertile ground to operate in the unstable, weakly governed spaces of several countries in Africa, including famine-ravaged southern Somalia, NPR’s Dina Temple-Ralston reports.

Terrorism specialists have taken particular note of the almost flawless English and light-skinned appearance of a man who appeared on a video distributed to Islamist website last week. The man describes himself as an emissary of bin Laden’s successor, Ayman Zawahiri, and he tailors his message to famine-ravaged areas of southern Somalia, which are under the control of the al-Qaida-linked Somali militant group al-Shabab. As NPR correspondent Temple Ralston reports Tuesday, the man’s Islamic name translates to “the Foreigner,” and in his slightly north African accented English, he said he had been sent to Somalia by Zawahiri to distribute aid to southern Somalia’s starving population:

So imagine the reaction when a little over a week ago an unusual video appeared on Islamic websites. It was of a white man with a scarf twisted over his face standing before bags of grain and piles of clothes in a desert in Somalia. In the video, he was addressing the hungry at a local feeding station. He said his name was Abu Abdulla al-Muhajir, or “the foreigner.” And there was one thing US officials noticed about the man almost immediately: He was speaking nearly perfect English.[…]

His English wasn’t quite unaccented and his word choice wasn’t quite right — but it was close. The young man went on to tell the crowd that al-Qaida leader Ayman al-Zawahiri had sent him to Somalia to distribute food and clothing. “Al-Qaida, under the leadership of Sheikh Ayman al-Zawahiri, continues to highlight the plight of the (community) and continues to support them with every means at their disposal,” he said.

“Counter-terrorism officials say the release of this tape could mean al-Qaida is forging closer ties” with Somalia’s al-Shabab, Temple-Ralston reports.

And indeed, the release of the tape comes as al-Shabab is accused of stepping up a campaign of kidnappings that target foreign tourists and aid workers providing famine relief in neighboring Kenya.

“Between kidnappings and politically motivated attacks against humanitarian targets, Somalia is one of the most dangerous places in the world to be an aid worker,” Mark L. Goldberg, a journalist with the UN Dispatch blog and co-founder of the Development and Aid Workers News Service told Yahoo News Tuesday.

On Tuesday, one American and two Danish workers with a Danish relief group were reportedly kidnapped in central Somalia by al-Shabab, the UK Telegraph reported. The Telegraph account noted that his was the “fourth abduction of Westerners by Somali gangs in the last six weeks, following kidnappings of British, French and Spanish women from northern Kenya.”

Last week, two Spanish medical workers with the medical relief group Medecins San Frontieres were kidnapped from the Dadaab refugee camp in Kenya and taken over the border into Somalia. (Dadaab–the largest refugee camp in the world–has been receiving tens of thousands of Somalis fleeing famine-ravaged areas of southern Somalia mostly under al-Shabab’s control.)

The action prompted Kenya last week to launch a military incursion–with alleged French and possibly American air support–against al-Shabab in southern Somalia. On Monday, in possible retaliation, two low-level bombing attacks were carried out against sites in the Kenyan capital of Nairobi.

However, the president of Somalia’s weak transitional government on Monday dismayed western allies when he urged Kenya to halt its military incursion in southern Somalia, the Associated Press reported. Somalia’s transitional regime ostensibly works with a 9,000-member African Union peacekeeping force to fight al-Shabab to maintain minimal control of the capital of the civil war-stricken country.

“American and European officials on Tuesday joined some Somali residents in expressing dismay over comments from Somalia’s president that called on foreign military allies to stop twin advances against Islamic insurgents,” the AP’s Katharine Houreld reported from Nairobi Tuesday. Somalia President Sheik Sharif Sheik Ahmed “on Monday publicly told Kenya to halt its military advance in southern Somalia. Diplomats say he also privately asked African Union troops not to move beyond the Deynile neighborhood of Mogadishu, where they are fighting al-Shabab militants for control.”

So who is Zawahiri’s English speaking aid emissary to Somalia, “the Foreigner?” U.S. military and intelligence officials are intently trying to find out.

“If you ask me what keeps me up at night, it is the thought of an American passport-holding person who transits to a training camp in Somalia, gets some skill, and finds their way back to the United States to attack Americans,” U.S. Africom commander Gen. Carter Ham told the Center for Strategic and International Studies earlier this month, Temple-Ralston reported.