By T. J. ENGLISH
Published: October 12, 2012
I RECEIVED news this week of the death of George Whitmore Jr., an occurrence noted, apparently, by no one in the public arena.
That Whitmore could die without a single mention in the media is a commentary on a city and nation that would rather bury and forget the difficult aspects of our shared history.
Forty-eight years ago, as a New York City teenager, Whitmore was initiated into an ordeal at the hands of a racist criminal justice system. For a time, his story rattled the news cycle. He was chewed up and spit out: an ill-prepared kid vilified as a murderer, then championed as an emblem of injustice and, finally, cast aside. That he survived his tribulations and lived to the age of 68 was a miracle.
I first met Whitmore in the spring of 2009 while doing research for a book that posited that his experiences constituted an important subnarrative to the racial turmoil of the 1960s and early 1970s.
Finding him was not easy. I eventually tracked him down in Wildwood, N.J., not far from where he’d been born and raised. I found a man who was broken but unbowed, humble, with glimmers of an innocence that had been snatched from him a long time ago. For a time in his adolescence, he’d been infamous. By the time I found him, he was anonymous, and that was O.K. with him. 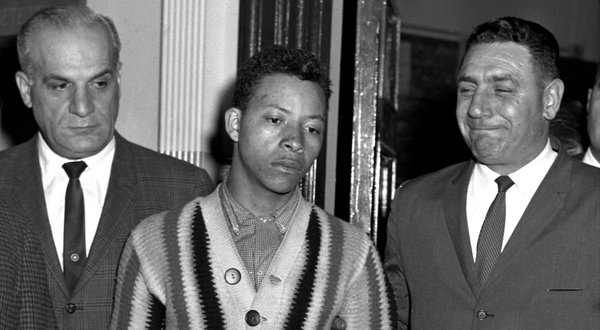 George Whitmore Jr., Who Falsely Confessed to 3 Murders in 1964
Back in April 1964, like a horrifying urban-jungle version of “Alice’s Adventures in Wonderland,” Whitmore began a nearly decade-long ramble through the justice system that still boggles the mind. It started on a misty morning when Whitmore, 19 years old, African-American, raised in poverty and a grade-school dropout, was taken by a handful of New York City detectives into the 73rd Precinct station house in East New York, Brooklyn. After a 22-hour interrogation by numerous detectives — all of them white — he was coerced into signing a 61-page confession detailing a series of horrific crimes, including, most notably, a brutal double murder of two young white women on the Upper East Side of Manhattan.
The case had become known in the media as “The Career Girl Murders.” The killings took place on the same day — Aug. 28, 1963 — and perhaps at the exact time that the Rev. Dr. Martin Luther King Jr. delivered his “I Have a Dream” speech at the March on Washington for Jobs and Freedom.
The confession was front-page news. The Brooklyn cops who were involved congratulated themselves; one was given a special award for exemplary work. But the confession was a fraud. To most objective observers, it didn’t seem likely that Whitmore could have committed the murders. At his arraignment, he told the judge that he’d been coerced into admitting guilt. Few cared: he was a disposable Negro who’d been raised in a shack alongside a junkyard in Wildwood — a “drifter,” described in one account as “possibly mentally retarded.” He was indicted, imprisoned and declared a monster.
America was just on the cusp of the civil rights revolution; it was a time of pernicious institutional racism. A black kid had been railroaded, and he wasn’t the first nor would he be the last. But the detectives had made the mistake of pinning on him the city’s most notorious open murder case, which brought about a higher level of scrutiny than the average homicide.
The case quickly began to fall apart. The detectives claimed that they had found a photo of one of the career girls in Whitmore’s wallet when they arrested him. He’d told them he’d found it at the murder scene and stolen it, they said. None of it was true. (He did have a photo on him, but it was not of either of the victims.) On the day of the murders, witnesses had seen him sitting in an empty catering hall in Wildwood, where he was working at the time, watching King’s speech on television. 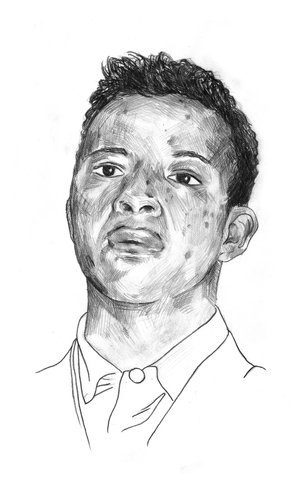 Despite a mounting belief among some civil rights activists associated with the N.A.A.C.P., and a few intrepid journalists, that Whitmore was innocent, he remained in prison, facing two death sentences. Depressed, frightened and alone, he pondered his imminent demise at the hands of the state. He asked other inmates: “If you were going to be put to death, which would it be? The chair? Lethal injection? What’s the least painful way to die?” A teenager, having committed no crime — ever — at that point in his life, pondering what means of execution he would choose: this was his reality.
It would take nine years for Whitmore to clear his name. It wouldn’t have happened without the help of many lawyers, a few newspaper reporters and the civil rights activists. Though the “Career Girls” murder charges were dropped early on — and the actual killer, Richard Robles, was eventually tried and convicted — Whitmore had also been forced to confess to another murder charge, and the assault and attempted rape of a woman in Brooklyn. There followed a numbing cycle of trials, convictions, convictions overturned, retrials and appeals. Whitmore went from being a nobody to being a perceived murderer to being a terribly “wronged man” and back to being a nobody. In prison, he learned to make rotgut hooch and, trying to dull the pain, became an alcoholic.
In April 1973, he emerged triumphant. A few weeks before all the charges against him were finally thrown out, CBS broadcast a highly promoted movie-of-the-week based on his ordeal. The movie, “The Marcus-Nelson Murders,” based on a book by the New York Times reporter Selwyn Raab, was produced and written by Abby Mann, an Academy Award-winning screenwriter. Whitmore was paid a pittance for his cooperation. In the end, the movie is best remembered for having introduced a character named Detective Theo Kojak, played by the actor Telly Savalas. Mr. Savalas and Kojak would go down in the annals of TV history. Whitmore watched the movie from the medical ward at the Green Haven state prison in Dutchess County. 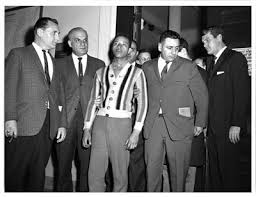 NINE years after his name was finally cleared and he’d been released from prison, Whitmore won a settlement of half a million dollars from the City of New York. But it was too little, too late. He’d been crushed by the system, his self-worth obliterated in ways that could never fully be put back together. He squandered the money he’d been awarded through bad business ventures and at the hands of devious friends and relatives. By the time I found Whitmore, he was living in poverty similar to what he’d known in those years before he was led into that police station in Brooklyn back in 1964.
Meeting Whitmore was eerie for me. Though he was 65 years old at the time, I could still see that 19-year-old kid who had been so horribly wronged all those years ago. You could see the pain in his face. In one of our first meetings, in the backyard of his tiny rented house on Route 9, I took a photo of him. You can look in his eyes and almost hear him asking the question, “Why me?”
Over the next two years, I frequently made the drive to Wildwood from Manhattan, a three-and-a-half-hour jaunt along the Jersey Shore. I’d take Whitmore to the market to buy groceries to fill his empty kitchen cabinets and refrigerator. Then we’d sit and talk.
Going over the past was painful for him. I tried to catch him early in the day. After he had his first couple of drinks, he was lucid and charming. He remembered his ordeal with such detail that it could send a chill up your spine and bring you to tears. After a few more drinks, he would lose focus, get sloppy and sometimes become ornery and difficult.
When the book was finished, I delivered a couple of copies to Whitmore. He held it in his hands, felt its heft and smiled with pride. Since adolescence, he had had poor eyesight, and I’m not sure he ever learned to read. But after he’d taken a few minutes to look at the pictures in the book and flip through its pages, seeing the familiar names and descriptions of events, he wept at the memory of his lost youth.
In recent months, I’d fallen out of touch with Whitmore. Knowing him, and attempting to assume a measure of responsibility for his life, was often exhausting. While I had come to love him, the drunken phone calls, the calls from hospital emergency rooms and flophouses, and the constant demands for money became overwhelming. When people who claimed to be friends of his starting calling me and asking for favors, I decided to back off. But when I received a cryptic e-mail from one of his nephews, informing me that Whitmore had died on Monday, I was overcome with sadness and regret.
Whitmore never saw himself as a race activist. In the 1960s and 1970s, from prison and on the streets, he watched the civil rights movement and the Black Power Movement at a wary distance. He did not judge people by their skin color. He knew he had been the victim of a grave injustice, but he did not assume that the detectives who framed him, or his slow torture at the hands of a rigged system, were motivated by racial prejudice.
By staying strong for all those years — by not taking a plea deal, as he had been offered numerous times — Whitmore forced the justice system to come to terms with the injustice that had been done to him. His ordeal was a key factor in the abolition of the death penalty (except for cases involving the killing of a police officer) by the State Legislature and Gov. Nelson A. Rockefeller, in 1965, and in the United States Supreme Court’s decision in the 1966 case Miranda v. Arizona, which broadened the rights of criminal suspects under interrogation. (The death penalty was restored in New York in 1995, but it was ruled unconstitutional by the state’s highest court in 2004.) Whitmore’s plight turned the wheels of justice, however painfully and incrementally.
Yet there are no plaques in honor of George Whitmore Jr., no schools named after him, or any civic recognition of his humble fortitude. His name should be known to every student in New York, especially kids of color, but it is not part of the curriculum.
This week, a flawed but beautiful man who offered up his innocence to New York City died with hardly any notice. To those who benefited from his struggles or who believe the city is a fairer place for his having borne them, I ask: Who grieves for George Whitmore?