How a simple infection can trigger cancer 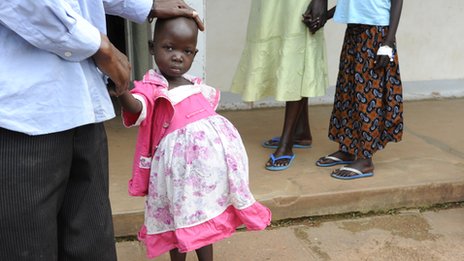 A girl in Uganda with Burkitt’s lymphoma, caused by a virus

Africa has a particularly high rate of cancers caused by infection. That’s the bad news. The good news is, they are – in theory – preventable using vaccines.

More than half a century ago, an Irish physician named Denis Burkitt moved to Uganda and opened a medical clinic.
He was quickly struck by the large number of children with facial swellings that often grew large enough to choke and kill. It was a type of cancer he had never seen back home.
The cancer came to be called Burkitt’s lymphoma.
Today, on the paediatric ward at the Uganda Cancer Institute, the beds are filled with children with Burkitt’s. It’s the most common childhood cancer in central Africa, and it starts with an infection.
“It’s associated with a virus called Epstein-Barr,” says Dr Abrahams Omoding, an oncologist at the institute.

Omoding says many people think cancers are caused either by bad habits, eating the wrong things or being exposed to radiation or chemicals.
But he points out that many infections can also lead to cancer, for example:

In Uganda, where many people are HIV-positive, Kaposi’s sarcoma is of epidemic proportions.
“The list is long,” says Omoding. “These are the most common cancers that we see, and all of them are actually virus-related.” 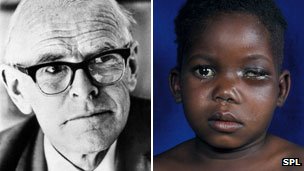 In North America, only one in 25 cancers can be blamed on infectious agents. In developing countries, it’s one in every four cancers, according to a recent study in the medical journal, the Lancet Oncology.

The reason? Poor sanitation in developing countries means greater exposure to germs. And people in sub-Saharan Africa, for instance, are not likely to be vaccinated against cancer-causing viruses such as Hepatitis B.
Some 8,800 miles (14,100km) from Kampala, in the US city of Seattle, scientists at the Fred Hutchinson Cancer Research Center are trying to work out how viruses cause cancer.
In Mei Lei Huang’s laboratory, researchers get shipments from Uganda every other month.
“If it’s a blood sample or tissue, it will come in dry ice,” she says.
The samples go in freezers that line one wall, and are part of a study of Burkitt’s lymphoma. Scientists want to determine how long the cancer takes to develop after a child is infected with Epstein-Barr virus.
Larry Corey, head of the centre, says the work is aimed at one goal: “Can we intervene? Can we alter the underlying development of cancer by attacking the virus?”

The biological link between infections and cancers works like this. Invading organisms infect cells and disrupt their normal workings. The Epstein-Barr virus, for example, infects immune system cells called B cells and causes them to grow.

“The more they grow, the more they divide,” Corey explains. “The more they divide, the more the chance there is of an alteration of the genetic material during the division phase.”
This alteration causes cells to grow out of control and become cancerous. But Corey says there is good news about infectious organisms and cancer – the link between the two can be broken.
“If you know an infection is the cause of cancer, if you attack the infection, you can actually prevent the cancer.”
That is already happening with the HPV vaccine, which protects against many of the viruses that cause cervical cancer.

RG III and his blackness: "Is he a brotha, or is he a cornball brotha"?