By JONATHAN MAHLER
Published: December 3, 2012
In retrospect, after the storm, it looked like a perverse stroke of urban planning. Many of New York City’s most vulnerable people had been housed in its most vulnerable places: public housing projects along the water, in areas like the Rockaways, Coney Island, Red Hook and Alphabet City.
How is it possible that the same winding, 538-mile coastline that has recently been colonized by condominium developers chasing wealthy New Yorkers, themselves chasing waterfront views, had been, for decades, a catch basin for many of the city’s poorest residents? The answer is a combination of accident, grand vision and political expedience.
New York started building housing projects on the waterfront because that’s where its poorest citizens happened to live. It continued because that’s where space was most readily available. Finally, it built them there because that’s where its projects already were.
Consider the Rockaways, the narrow spit of land in southern Queens that was so emblematic of Hurricane Sandy’s undemocratic wrath, and whose long row of oceanside towers (the Arverne, Hammel, Redfern and Edgemere developments) stand as a kind of dubious monument to a bygone era of New York City housing policy. 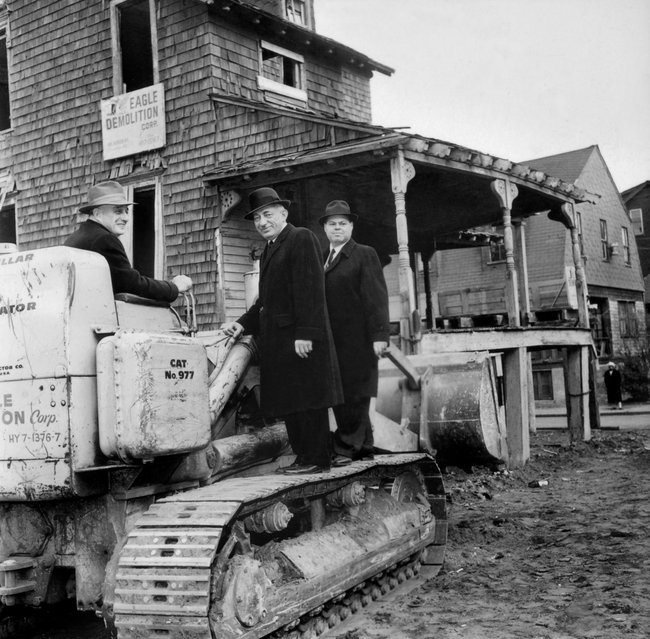 Robert Moses, seated at left in 1959, used his position as head of the Mayor’s Committee on Slum Clearance to mass-produce thousands of units of public housing, often near the shoreline.

Projects first started to rise in the Rockaways in 1950. At the time, there was an unprecedented demand for housing, from returning veterans and blacks migrating from the South, as well as plenty of federal financing as a result of the Housing Act of 1949.
Above all, there was Robert Moses.
“Why did the Rockaways end up with so much government-financed housing? Largely because Robert Moses wanted it there,”says Robert Caro, author of “The Power Broker: Robert Moses and the Fall of New York.”
It’s impossible to talk about the landscape of modern New York without talking about Moses, who leveraged his position as head of the Mayor’s Committee on Slum Clearance to mass-produce thousands of units of high-rise public housing, often near the shoreline. His shadow looms over much of the havoc wreaked by the storm.
The Rockaways were irresistible to Moses. Once a popular summer resort for middle-class New Yorkers, who filled its seaside bungalows and crowded into its amusement parks, the area had fallen on hard times when cars, new roads and improved train service made the beaches of Long Island more accessible.
Never one for nostalgia, Moses saw the Rockaways as both a symbol of the past and a justification for his own aggressive approach to urban renewal, to building what he envisioned as the city of the future. “Such beaches as the Rockaways and those on Long Island and Coney Island lend themselves to summer exploitation, to honky-tonk catchpenny amusement resorts, shacks built without reference to health, sanitation, safety and decent living,” he said, making his case for refashioning the old summer resorts into year-round residential communities.
What is more, the Rockaways had plenty of land that the city could buy cheaply, or simply seize under its newly increased powers of eminent domain, swaths big enough to accommodate the enormous public-housing towers Moses intended to build as part of his “Rockaway Improvement Plan.” Though only a tiny fraction of the population of Queens lived in the Rockaways, it would soon contain more than half of its public housing.
The old summer bungalows that weren’t bulldozed in the process were repurposed as year-round housing for those uprooted by Moses’ urban renewal — derided as “negro removal,” by the writer James Baldwin — across the city. In “The Power Broker,” Caro describes a federal housing official’s shock at finding the bungalows filled in the winter, with “several shivering Negro and Puerto Rican families in each.”
Initially, there was a strict screening process to get into the Rockaways’ new projects. Over time, though, those with steady incomes were encouraged to leave, to make room for people on public assistance. To city officials, the Rockaways’ distant location made it an ideal destination for troubled families and individuals. The projects that lined the seven-mile-long peninsula were soon joined by facilities for recently deinstitutionalized mental patients and high-rise nursing homes.
“After World War II, Rockaway was essentially treated as a dumping ground,” says Lawrence Kaplan, the co-author of “Between Ocean and City: The Transformation of Rockaway, New York,” which details the area’s devolution into an outpost for the city’s neediest populations.

Today, in the aftermath of the storm, it is hard not to see the Rockaway projects as inherently flawed, doomed not only by their exposure to the storm-churned waters of the Atlantic, but by their very design. Densely populated, without any retail space, and isolated from the rest of the city, the mostly poor residents have relied on help arriving from the outside. Moses may have thought he was breaking up the city’s ghettos; in fact, he was relocating them and setting them in concrete.
Dig a little further back, though, and there is another way to look at these and the rest of New York’s projects, not as a callous solution to the city’s obligation to provide shelter for those in need, but as the product of a progressive government’s good intentions gone awry.
It was New York’s Little Flower, Mayor Fiorello La Guardia, who first decided that the city’s slums had to go, that all of his citizens — including “the other half,” as Jacob Riis unforgettably described the city’s poor — were entitled to clean, modern and affordable housing.
La Guardia’s gaze turned immediately to the derelict waterfront and its cold-water flats, “rotten, antiquated ratholes” that had been hastily constructed in the 19th century to accommodate the surge of European immigrants who worked predominantly on the docks, which were then bustling. The city’s first projects, on the Lower East Side, along the Harlem River and in Williamsburg, Brooklyn, were erected as part of Depression-era work relief programs.
New York’s first project to be underwritten by the United States Housing Authority, the Red Hook Houses, was built on a large patch of cheap land just blocks from what was once one of the city’s busiest port. A modest six stories tall, they were hailed in 1940 as a model of public housing, “a Versailles for the Millions,” in the words of the architecture critic Lewis Mumford. The description could not have seemed more dissonant in the aftermath of the storm, when its residents endured three weeks of Third World squalor.
Gradually, the projects grew taller and drifted farther from the city’s center, in large part thanks to Moses, who, like many urban planners of his era, believed that high-rises represented the most land-efficient and cost-effective way to house the maximum number of people.
In Coney Island, as in the Rockaways, Moses looked at a struggling seaside resort and saw an opportunity for large-scale public housing. There too, his grand improvement plans probably only accelerated the neighborhood’s decline. “From the 1940s on it was like a self-fulfilling prophecy,” says Charles Denson, the author of “Coney Island: Lost and Found.”
By the middle of the 1960s, Moses’ power was waning, and his approach to public housing — the imposition of large projects on unstable neighborhoods — had been judged a failure, both from a moral and an urban-planning perspective. But the need for low-income housing hadn’t abated, and the only areas where it was politically feasible to build it were places where projects already existed. And so more towers went up, in both the Rockaways and Coney Island.
Mayor John V. Lindsay, who took office in 1965, was determined to break this cycle, to put low-income projects in middle-class neighborhoods. He tried, memorably, in 1971 in Forest Hills, Queens, figuring that the community’s predominantly liberal Jewish population would not object to the arrival of three 24-story towers. He was wrong. The construction site was soon overrun with angry protesters.
The Forest Hills debacle more or less put an end to the construction of large-scale public housing in New York. Politicians and urban planners were moving on to a new idea, known as “ghetto rehabilitation.” The large sums required to build high-rise towers were no longer flowing from Washington, and New York City itself was on the brink of bankruptcy. The Rockaways’ last high-rise project, the Beach 41st Street Houses, were completed in 1972, Coney Island’s in 1974.
That so many huge islands of public housing still exist in New York some 40 years later makes the city something of an anomaly: The federal government has literally blown up similarly scaled public housing in cities across America, writing it off as the legacy of a badly misguided era of urban planning.
But in New York the projects have survived, outlasting first the ever-evolving policies of housing reformers, and now, Hurricane Sandy.