FRENCH airstrikes that began on Friday have stopped, for now, a network of terrorists, criminals and religious extremists from taking over Mali. Until the French stepped in, the near-collapse of the military had threatened to turn Mali, a landlocked, desperately poor country, into a desert stronghold for jihadists.

America, which has spent more than $500 million over the last four years to keep Islamist militants at bay in West Africa, has its hands full in Afghanistan, Pakistan, Egypt and Libya, among other places, but it is in our national interest to support the French. North African countries, in particular Algeria, must also help save Mali from catastrophe.

This conflict is not like other African wars that had only marginal effects on the West. The Islamists in Mali have linked up with Boko Haram, the Nigerian militant group that blew up United Nations offices in Abuja in 2011, and with Ansar al-Shariah, which is thought to be responsible for the murders last September of Ambassador J. Christopher Stevens and three other Americans in Benghazi, Libya. 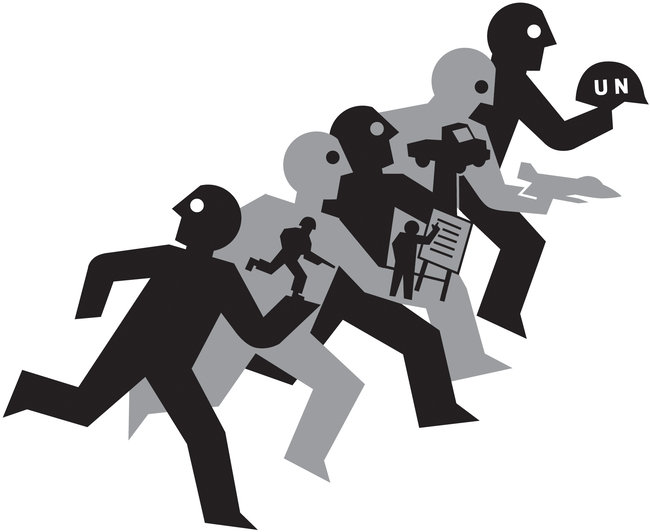 The French aerial attacks have stopped the Islamists — including Al Qaeda in the Islamic Magreb, its offshoot the Movement for Oneness and Jihad in West Africa, and Ansar Dine, a group of Tuareg rebels from the north — from seizing an airport and river port, and marching on the capital, Bamako. But the militants are reconstituting and rearming in their northern desert stronghold.

The United States need not put combat troops on the ground. Instead, we should provide intelligence, equipment, financing and training for a West African intervention force that the United Nations Security Council approved in December (but did not finance). The French will not be able to depart quickly — even if the West African force is assembled, France will have to mentor and coordinate troops from its former colonies like Mauritania, Niger and Chad.

International cooperation has been effective against Al-Shabab, a Qaeda affiliate in Somalia, and it can succeed in Mali. In Somalia, American troops and contractors trained and equipped African Union troops, including soldiers from Uganda and Burundi. Together with a new Somali army, they pushed Shabab terrorists out of Mogadishu and much of southern Somalia last year.

North Africa, not West Africa, is the key to saving Mali. One proposal, to have Nigeria lead a coalition of West African forces in Mali, has little chance of success; Nigeria lacks the capacity to fight a guerrilla war or an urban war. It has English-speaking Christian troops who might exacerbate Mali’s ethnic and religious tensions, and its heavy-handed attempts to counter its own Boko Haram extremists have so far failed.

Algeria is the only country on the continent with the military capacity, seasoned officers, counterterrorism experience and geographic proximity to take over from France in bringing peace to Mali. Algeria’s military leaders know the extremists’ tactics and their leaders. It defeated them in a civil war that lasted from 1991 to 2002 and resulted in extremists’ setting up terrorist operations in northern Mali. Algeria has a moral responsibility to act, but if it continues to stay on the sidelines, then Morocco or another North African country should take the lead — with support from Niger, Mauritania, Mali and Chad, which, like Algeria, have been fighting Al Qaeda in the Islamic Maghreb for the past eight years.

Algeria is also essential to ending the rebellion of the nomadic Tuareg, who are culturally, ethnically and linguistically North African and resist the rule of the sub-Saharan ethnic groups that run Mali. Their rebellion began in late 2011, when Tuareg fighters who had fought in Libya alongside its deposed ruler, Col. Muammar el-Qaddafi, returned home. They joined with Islamist militants who had moved in to northern Mali from Algeria, but the Islamists then turned on many of the Tuaregs and consolidated power.

Algeria has negotiated the peace during past Tuareg rebellions in northern Mali and can do so again. The key to peace in Mali is to first defeat the Islamist insurgents and then for Bamako to negotiate autonomy for the northern nomads — who, in concert with the African peacekeepers, will be responsible for their defense. The arrangement might look something like that of Somaliland, a region of northern Somalia that has held democratic elections, maintained peace and become a de facto sovereign state.

Mali’s army has never effectively controlled the region north of the Niger River; its troops fear the warlike nomads. A tribal chief in northern Mali once told me, “If you want to control the Sahara, you will have to work with us. We have been masters of the desert for thousands of years and we will continue to rule here.”

Years of training by United States Special Forces did not stop the Malian military from fleeing when the Islamist insurgency started last January. In fact, the military exacerbated the chaos by overthrowing Mali’s democratically elected government last March.

Reconstituting Mali’s broken government and discredited military will take years, but making sure that Mali doesn’t become a launchpad for terrorism is an even greater priority. France has begun to exercise leadership; the United States must not dither in doing its share.

Vicki Huddleston, the United States ambassador to Mali from 2002 to 2005, has been a deputy assistant secretary in the State and Defense Departments.