William Greaves, a producer and director who helped bring an African-American perspective to mainstream America as a host of the groundbreaking television news program “Black Journal” and as a documentary filmmaker, died on Monday at his home in Manhattan. He was 87.

Mr. Greaves was well known for his work as a documentarian focusing on racial issues and black historical figures. In his later years he was equally known for his most uncharacteristic film, “Symbiopsychotaxiplasm: Take One.” Made in 1968, it mixed fact and fiction in a complex film-within-a-film structure that made it a tough sell commercially, and it waited almost four decades for theatrical release. When it finally had one, in 2005, it was warmly praised as ahead of its time.

Mr. Greaves (rhymes with “leaves”) gained national recognition as a co-host and later executive producer of “Black Journal,” a monthly hourlong National Educational Television newsmagazine that made its debut in 1968 in response to a call by the National Advisory Commission on Civil Disorders to expand coverage of black affairs. It was the only nationally telecast series devoted to black issues in the 1960s. 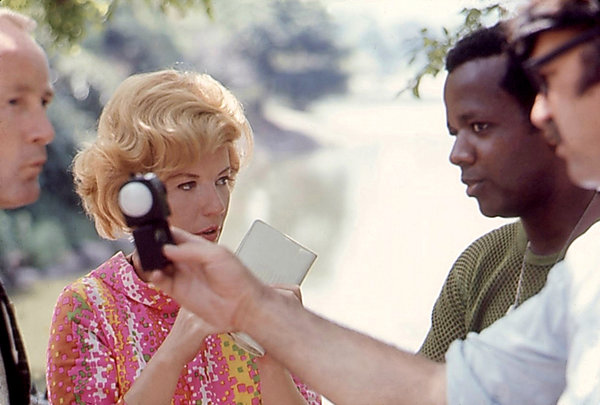 “By the acid test of professional and perceptive journalism, ‘Black Journal’ has earned its rightful niche as a continuing and absorbing feature of television’s output,” the television critic Jack Gould wrote in The New York Times in 1969. “Mr. Greaves is simply covering a story that should be covered and covering it with distinction.”

In 1970, “Black Journal” won an Emmy in the “magazine-type programming” category.

Later that year, Mr. Greaves left the program to pursue projects developed by his own production company. (He was replaced by Tony Brown, and the program was later renamed “Tony Brown’s Journal.”)

“The Fighters,” a feature-length documentary Mr. Greaves produced and directed about the 1971 Muhammad Ali-Joe Frazier fight, was released theatrically in 1974. Writing in The Times, Vincent Canby called it “a first-rate film of its unprepossessing kind.”

He went on to write, produce or direct films including the well-received PBS documentaries “Ida B. Wells: A Passion for Justice” (1989) and “Ralph Bunche: An American Odyssey” (2001), as well as explorations of contemporary political and cultural issues like “Black Power in America: Myth or Reality?” (1986) and “That’s Black Entertainment” (1989). His work won awards at numerous festivals.

William Garfield Greaves was born in Harlem on Oct. 8, 1926, one of seven children of Garfield Greaves, a taxi driver and minister, and the former Emily Muir. He won a scholarship to the Little Red Schoolhouse in Greenwich Village and later graduated from Stuyvesant High School.

His education continued at the City College of New York. Between 1944 and 1952 he tried his hand at boxing, dancing, songwriting and acting. He joined the American Negro Theater shortly after high school and, for a time, vied for roles with Harry Belafonte and Sidney Poitier.

He appeared on Broadway in “Finian’s Rainbow” (1947) and “Lost in the Stars” (1949) and in a few movies, among them “The Fight Never Ends” (1948), an independent production starring the boxing champion Joe Louis, and “Lost Boundaries” (1949), a Hollywood film about race relations. In 1948, he was accepted as a member of the Actors Studio, but he decided to forgo a promising acting career and became involved in production.

“I became infuriated by the racially degrading stereotypes that white film producers threw up on American screens,” he wrote in 1969. “It became clear to me that unless we black people began to produce information for screen and television there would always be a distortion of the ‘black image.’ ”

In 1950 he began working with Louis de Rochemont, a noted documentary filmmaker and the producer of “Lost Boundaries.” From 1952 to 1963 he lived in Canada and worked for the National Film Board of Canada as a writer, editor and producer.

He married Louise Archambault in August 1959. She survives him, as do their three children, David, Taiyi and Maiya Greaves; two brothers, Theodore and Donald; a sister, Ruth Evadne Brooks; three grandchildren; six great-grandchildren; and one great-great-grandchild.

Mr. Greaves produced short films for the United Nations and the United States Information Agency before forming his production company, in 1964. He first attracted attention as a filmmaker with “Still a Brother: Inside the Black Middle Class,” an examination of the barriers facing upwardly mobile blacks, which he produced for National Educational Television in 1968.

Around the same time he wrote, produced, directed and edited “Symbiopsychotaxiplasm: Take One.” An experimental layers-of-reality work, it involved two actors performing a scene in Central Park while being filmed by a crew that was itself being filmed by another crew, all of the action presided over by Mr. Greaves himself.

He was unable to find a distributor, and except for screenings in Paris and New York in 1980 it languished for more than 20 years. It was finally shown at the Brooklyn Museum and the Sundance Film Festival in the ’90s, but it was not seen in movie theaters until it opened, to glowing reviews, in 2005.

Manohla Dargis of The Times, while acknowledging that the film was in some ways dated, called it “highly entertaining and, at moments, revelatory about filmmaking as a site of creative tension between individual vision and collective endeavor.”

Other filmmakers took notice, among them Steven Soderbergh, who as executive producer (with the actor Steve Buscemi) helped Mr. Greaves complete a belated sequel, “Symbiopsychotaxiplasm: Take 2 ½” (2005). They are now available as a two-DVD set from the Criterion Collection.

In his later years, when asked about his achievements as a chronicler of black history and black life, Mr. Greaves was proud but modest. “I thought I was going to be a hurricane, but I ended up a becoming merely a single raindrop,” he once said. “Hopefully there are other raindrops of similar mind.”

The Cambridge, Maryland race riots of 1967

Tim Maia, singer who died in 1998, is inspiring the movement called Black Rio