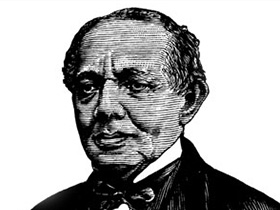 The abolitionist writer William Whipper was born in Lancaster in 1804.
Abstract:

Born in Pennsylvania in 1804, William Whipper was educated by a private tutor. He lectured on moral reform and published his speech “Address on Non-Resistance to Offensive Aggression” at the age of 24. He became a successful entrepreneur and continued to fight for moral reform and abolition. His work is considered as a forerunner to the civil rights movement. He died in 1876.

William Whipper was born in Lancaster, Pennsylvania, on February 22, 1804. Little has been recorded about Whipper’s childhood. His mother Nancy was an African-American servant for his father, a European-American lumber merchant who lived in Little Britain Township in Pennsylvania. In 1836, Whipper married Harriet L. Smith. William Whipper’s father requested his son have a good education from his very early days as a child. His father saw to it that the same tutor who educated Whipper’s half-siblings taught William reading and writing. His education helped Whipper become a well-known member of literary societies by the time he reached his twenties. He became a lecturer on moral reform. In the 1820s, Whipper relocated to Philadelphia, and he took a job as a steam scourer. Whipper delivered his addresses at various locations, such as conventions or small meetings. At the age of 24, Whipper published his famous speech “Address on Non-Resistance to Offensive Aggression.” This address has been highly praised for its early allusions to what became some of the same nonviolent strategies utilized during the civil rights movements of the 1960s. The piece suggests implementing a nonviolent means of moral righteousness in order to encourage a peaceful political movement towards change. In 1834, Whipper opened a free labor and temperance grocery store in Philadelphia, Pennsylvania, next to the Bethel Church. In 1835, he returned to rural Pennsylvania, moving to Columbia. Upon moving, Whipper married Harriet L. Smith and formed an exciting business partnership with Stephen Smith, an African-American entrepreneur. Their organization accumulated a great wealth, and the two men were considered to be two of the wealthiest African-Americans in antebellum America. Whipper used his newfound wealth to further his causes and his fight for moral reform and abolition. Whipper wrote and produced many essays dealing with abolition of slavery. He contributed numerous articles and letters to various abolitionist papers like the Liberator, the North Star, and the National Antislavery Standard. In 1835, he attended the annual convention of the Improvement of Free People of Color. He urged delegates to adopt a resolution, which ended the usage of the word “colored.” Because of his persistence, the delegates decided to organize a society that would have no racial boundaries. The convention later formed the American Moral Reform Society and gave Whipper credit as a founding father. He served as editor of the National Reformer, the journal of the AMRS. While living in Columbia, Whipper offered his home as a safe place for those traveling the Underground Railroad. He spent almost $1,000 annually to assist those trying to escape from slavery. Whipper never received any formal awards for his writings, but he is considered to be the forerunner of a civil rights movement who preceded the works of Martin Luther King Jr. and Gandhi. In his “Address on Non-Resistance to Offensive Aggression,” Whipper equated non-violence with a sense of reason. William Whipper died on March 9, 1876, in Philadelphia, Pennsylvania.

Born February 22, 1804 in Lancaster, Pennsylvania to an African American house servant and her white employer, William Whipper epitomized the unique prosperity that Northern Blacks were able to attain in the mid-19th century. William had three siblings Alfred, Benjamin and Mary Ann. Whipper was a successful businessman and played a key role in the antislavery movement as a reformer.
After moving to Philadelphia in the 1820s, he began focusing his energies on his business pursuits. In 1834 he opened a free labor and temperance grocery store. His support of the temperance movement was motivated by liquors destructive effect on Africa and the belief that alcohol consumption was a contributing factor for Africans selling their own people into slavery.  In conjunction with his support for the temperance movement, Whipper began actively participating in the antislavery movement as well.

As a successful businessman

In 1835 Whipper relocated to Columbia, Pennsylvania with fellow black entrepreneur Stephen Smith. The pair created one of the state’s premier lumberyards and accrued substantial wealth demonstrating the benefits of northern freedom. Whipper used his new found wealth to further his personal fight for moral reform and abolition. He utilized his assets to the benefit of the antislavery movement by helping runaway slaves escape to the north. His sister Mary Ann married James Hollensworth and settled in Dresden, Ontario, Canada, a final destination on the Underground Railroad. Mary Ann and James were the overseers of William Whipper’s investments in Dresden. William Whipper operated a major underground railroad station and provided shelter for slaves primarily from Virginia and Maryland, moving them in part in the railroad cars he owned. Ideology and contributions to the abolitionist and antislavery movement

Whipper’s ideology regarding antislavery was unique and complex. One of his main tenets rested in moral reform. Moral reform refers to the idea that the abolitionist movement “served as a check on the evil dispositions of blacks and inculcated moral principles.
Initially Whipper believed that white prejudice against Black Americans stemmed from the condition in which blacks found themselves, not just the color of their skin. In order to overcome their condition, Whipper stipulated that “blacks had to improve their mental, economic, and moral situations. By making such improvements, blacks would seemingly conform to white standards of living, making social acceptance more attainable.
Another key component of Whipper’s ideology was rooted in idea of nonviolence and rational persuasion. At the age of 24, Whipper published his famous speech Address on Non-Resistance to Offensive Aggression. This address suggested that nonviolent means of moral righteousness were necessary to encourage a peaceful political movement towards change. This address has been a considered a precursor to what would become some of the same nonviolent strategies followed during later civil rights movements.
Furthermore, Whipper demonstrated his dedication to the notion of moral reform via the creation of the American Moral Reform Society. In 1835 he attended the annual convention of the Improvement of Free People of Color. He urged delegates to adopt a resolution, which ended the usage of the word “colored.”  Because of his persistence, the delegates decided to organize a society that would have no racial boundaries. The convention gave birth to the American Moral Reform Society, and gave Whipper credit as a founding father. The American Moral Reform Society attempted to promote general aims such as educating blacks, establishing a black press, and printing histories of the blacks.