She lets out a piercing cry, her body starts shaking violently, her hands are clapping to the rhythm of large African drums – she is calling out to her ancestors. Thabiso Siswana is a traditional healer, known in South Africa as a sangoma.

The 24-year-old is not your typical sangoma though – she is also a corporate administrator at Bidvest Bank, one of South Africa’s best known and most prestigious institutions and has dreams of becoming a successful businesswoman.
Inside a high-rise office looking out into the Johannesburg business district, Ms Siswana dresses in smart tailored clothes, has manicured nails and long sleek hair extensions – nothing about her appearance says she has three ancestors inhabiting her.

“When I tell people that I am a sangoma they always react with shock. They say: ‘How? You don’t even look like one’. There are still many misconceptions about how we should look,” she says with a broad smile.

Ms Siswana is one of thousands of young men and women who are balancing the demands of a career with the calling to be a messenger for deceased ancestors, or “amadlozi”.
Sangomas have played a central role in many African cultures dating back many years; they were seen as custodians of their communities and were consulted by villagers to heal the sick, communicate with the gods on their behalf and to protect villages from harm.
They are essentially diviners – a channel between the physical world and the afterlife. 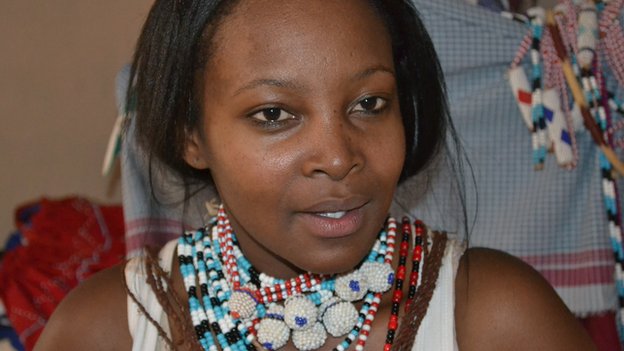 Thabiso Siswana says she “succumbed” to be trained as a sangoma last year, after years of evading her “calling”

What do South Africans believe?

They believe that through a special “calling” known in Zulu as ubizo, they are able to access advice and guidance through possession by an ancestor, throwing bones or by interpreting dreams.

In today’s South Africa, sangomas are often seen as unsophisticated, uneducated and backwards.
Despite this, they remain the first point of contact for physical and psychological ailments for about 80% of black South Africans according to authorities.
The trade in traditional medicines is a large and growing industry.
Sangomas are legally recognised, under the Traditional Health Practitioners Act of 2007 alongside herbalists, traditional birth attendants, and traditional surgeons.
At Ms Siswana’s home in Soweto, a township outside Johannesburg, a small group of sangomas has gathered to share a meal.
It is a moody Sunday afternoon but the group is in high spirits – this will be their chance to summon deceased loved ones and possibly receive a message from them.
Ms Siswana says her “gift” is interpreting other people’s dreams, as well as dreams that predict the future.
Chilling eyes

On the weekend of her initiation last year, she was given a herb that put her into a trance, a state in which she needed to go looking for her sacrificial goat, which the elders had hidden from her within the surroundings of her home along with other objects. She was able to find them and this was seen as proof of her ability “see” beyond the physical world.

“The ancestors guided me to where the items were, you do not graduate until you are able to ‘see’ through them. This skill is important when we consult with patients,” she explains.
Inside the indumba, a sacred room where sangomas communicate with the ancestors, Ms Siswana asks the amadlozi to allow the BBC crew to spend the day with her and also invites them to join in the day’s festivities – it is rare access into this mystical and often secretive world.
Ms Siswana begins to dance vigorously, her face grimaces with pain and she struggles to catch her breath, the intensity in her eyes is chilling.
“My great-aunt, -uncle and grandfather live in me. When they take over I lose all control of my body, I’m aware of my surroundings but I have no control over what I say or do. They completely consume you and in that moment I am their messenger,” she later tells me.
The bang of the drums fills the air, drowning out the chatter of curious neighbours peering over their fences and the hoots cars driving past.
Along with her deep roots in tradition and African culture, Ms Siswana is also a Christian. 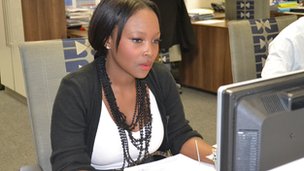 Thabiso Siswana is equally at home in the office

“We are Christians at home and we go to church like everyone else. We pray to God as the source of everything. I believe that being a sangoma is simply a gift that God has given me through my ancestors,” she says.
This young woman has been around sangomas all her life – her mother Makhosazana Moloi has been a traditional healer for more than 20 years.
She runs an initiation school for sangomas in her home and says she always knew her daughter had been chosen.
“As a child, Thabiso would often have vivid dreams. She would get warnings or messages from animals [which signify ancestors] about what was going to happen or was happening in our lives,” says her mother.
Stick it on the insurance
Traditional healers say they are often accused of being witch doctors.
Originally, witch doctors were consulted to drive out evil spirits believed to have been cast over someone by witches, but since colonial times the word has assumed a derogatory meaning and is used to refer to the people who cast spells for evil purposes and create deadly potions.
“The problem is the misinterpretation of what a sangoma is. A sangoma is not a witch – a sangoma is pure and does good. People due to their lack of knowledge think witch doctors, witches and sangomas are all the same thing and they are not,” says Ms Moloi. 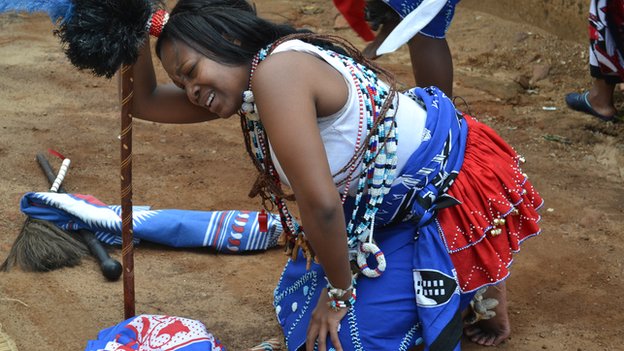 The other distinction is that traditional healers use herbs, plants and some animal skin in the muthi (medicines), whereas witch doctors are said to also use human body parts, meaning they are sometimes implicated in murders.
Sangomas believe that a persistent physical ailment is often a manifestation of a spiritual upset and they first need to address that, then they are guided by the ancestors on what the physical sickness is and how best to treat it, using traditional medicine.
But you also have people who specialise purely in the physical illnesses, known as a herbalist, inyanga in Zulu.
Part of the confusion about sangomas and inyanga stems from the many quack healers operating throughout the country, who advertise cures for all manner of diseases, potions to increase penis size, ensure success in love or business or sometimes to ensure your enemy’s downfall.
Despite its many years of existence, this industry remains unregulated and no single body oversees the estimated 200,000 practitioners – compared to the 38,236 medical doctors.
This is part of the problem, according to the Medical Research Council, which recently established the Indigenous Knowledge Systems Unit to help write policies that would benefit those in this sector.
Organisations such as the Traditional Healers Organisation have for years been trying to legitimise the practice and have it held in the same regard as Western medicine. Some even want their services to be paid for by medical insurance.
They say the government needs to set up a national register of credible and certified sangomas, with documents verifying their qualifications and outlining their areas of expertise.
The Department of Health says there is a great deal of work to be done but say it hopes its recently established Traditional Healers Council, whose role will include how Western doctors and traditional practitioners can work together, will help bridge the gap between the two worlds.
Some may think this is impossible but many South Africans, such as Ms Siswana, are already equally at home in both.

Who Were the Canaanites?