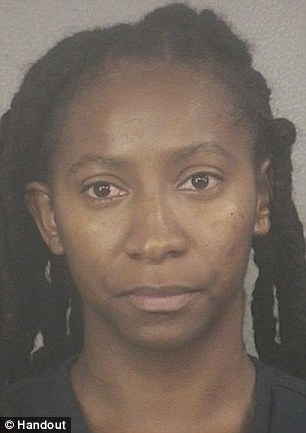 Stunned: Eva Hartman, 34, allegedly screamed ‘You and I just had sex last night’ when she saw Alvin Hennis, 42, and Cordelia Rose naked in bed

A scorned Florida woman who caught the father of her child with another woman made sure they felt her same shock… literally.

Eva Hartman, 34, allegedly screamed ‘You and I just had sex last night’ when she saw Alvin Hennis, 42, and Cordelia Rose naked in bed.

Hartman stunned him and his lover with a stun gun she had on her key-chain, chasing Ms Rose out the window of the home.

Hartman was arrested and charged with domestic battery.

‘We were supposed to do something together that morning, and I forgot. I went to my house, and things happened.’

Police said when Hartman came home to the couple’s Pembroke Pines house, she found Mr Hennis and and his current girlfriend.

Horrified and angered by the site of the entangled two, she allegedly whipped out her stun gun key-chain and attacked.

Hartman allegedly shocked the man on the arm before turning on Ms Rose. Mr Hennis separated the two women and pushed Hartman out of the house, police said, while Ms Rose climbed out the back window.

Freed: Judge John Hurley set Hartman’s bond at $2,500 and orderd to stay away from Ms Rose

However, Hartman saw Ms Rose fleeing and went after her again, stunning her in the neck as she tried to open her car, police said. Neither of the stunned lovers needed medical treatment after the incident, but Hartman was arrested shortly after.

At her hearing, Mr Hennis urged the judge to go lenient on the mother of his child, taking the blame for the attack.

‘You and I just had sex last night!’
Eva Hartman

As Mr Hennis made his passionate plea, Hartman appeared to hold back laughter. He said that Hartman’s device was ‘weak’ and that he didn’t know what it was.Police did not disclose what kind of stun gun it was, but that she did not have a permit for it.

‘She is a beautiful mother, a hard worker and very responsible. I think she got emotional by what she saw,’ Mr Hennis told Judge Hurley.

‘I could imagine things could get very emotional,’ Judge Hurley answered.

He apologized for his actions, adding that he forgot to lock the door to the master bedroom.

‘That probably was your first mistake,’ Judge Hurley said.

Judge Hurley set Hartman’s bond at $2,500. She was released on Thursday and ordered to stay away from Ms Rose.

Teen forced to wear I lie, I steal, I sell drugs, I don't follow the law." sign by Mom.