Bizarre footage has emerged of a woman seemingly wetting herself and then taking a shower while travelling on a New York subway.

In the video, the woman is standing with a friend in a busy subway car when she crouches slightly and appears to urinate.

To the disbelief of her fellow passengers, she then proceeds to get a gallon bottle of water out of her bag and gives herself a makeshift shower. 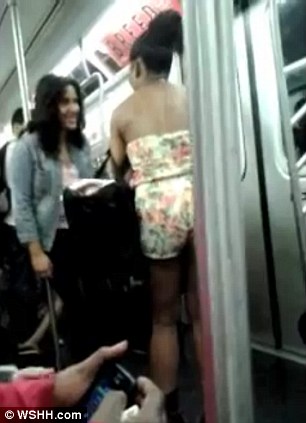 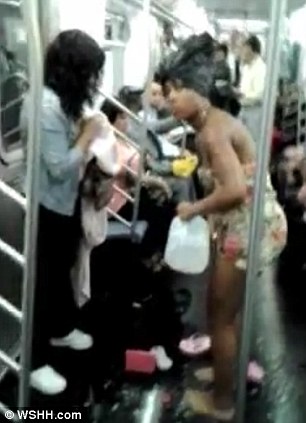 Subway shower: The woman starts moaning and appears to urinate, left, before beginning her makeshift shower, as gobsmacked passengers look on

It’s not clear when the extraordinary incident took place but the footage was first posted to the internet last Thursday.

Judging from the contents of her bag, this was no spontaneous shower – she fetches out a pink sponge and some liquid soap then gives herself a good scrub.

The woman, who is wearing a tiny floral jumpsuit and flip-flops, appears to be slightly distressed and tells passengers she needs to wash before meeting friends.

As other passengers start sniggering at her, she protests, ‘It’s not funny! I can’t stay like this stink.’ 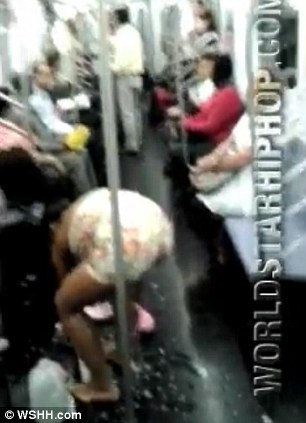 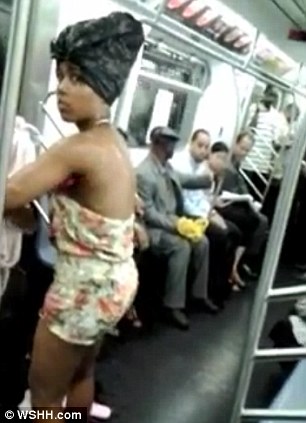 Stinky: When passengers start sniggering, she protests: ‘I can’t stay like this stink’ 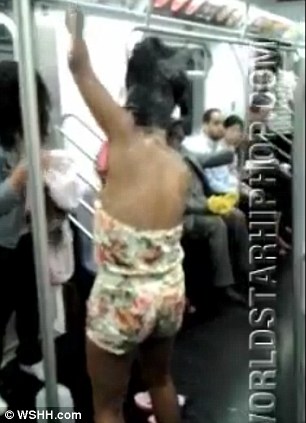 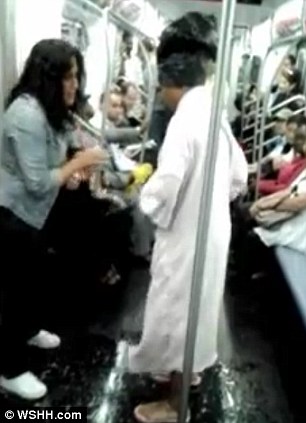 Scrubbing up: After giving herself a good scrub – complete with liquid soap and a sponge – the woman wraps up in a bathrobe

A sarcastic woman unkindly chimes in, ‘I know, right! People are so ignorant.’

All cleaned up, the woman’s friend hands her a pink bathrobe which she momentarily puts on before whipping it back off and liberally throwing on some talcum powder.

The five-minute video was uploaded onto hip-hop site WorldStarHip Hop on September 20, where some commentators suggested the whole thing was an attention seeking stunt.