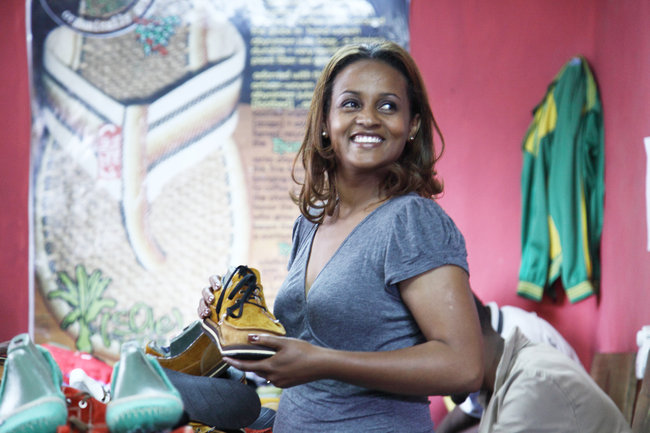 Bethlehem Tilahun, founder of SoleRebels, in her factory in Addis Ababa, Ethiopia, in June.

KAMPALA, UGANDA — Far too often, in the view of Africa’s budding female entrepreneurs, their continent is characterized as the recipient of aid that enables residents just to struggle by, and as a place that mistreats and marginalizes its women.

Data analysis from Google shows that since 2004, the most common single term related to searches from the United States for “Africa” has been “AIDS.” This year, the charity Save the Children named Niger the “worst place to be a mother.” On the United Nations’ Web site, Africa is the only continent listed under “Issues.”

It was into this world, and against it, says Bethlehem Tilahun, that her shoe company SoleRebels was born.

“I kept hearing over and over the phrase ‘poverty alleviation,”’ said Ms. Tilahun, now a footwear mogul whose company grossed $2 million in sales this past year. “The media, preoccupied with a singular narrative about ‘Africa’ that missed the story of Africa — part of a larger spectrum of endless entities that have monopolized Africa’s image, our brand.”

With SoleRebels, she said proudly, “We’ve inverted the whole paradigm.” 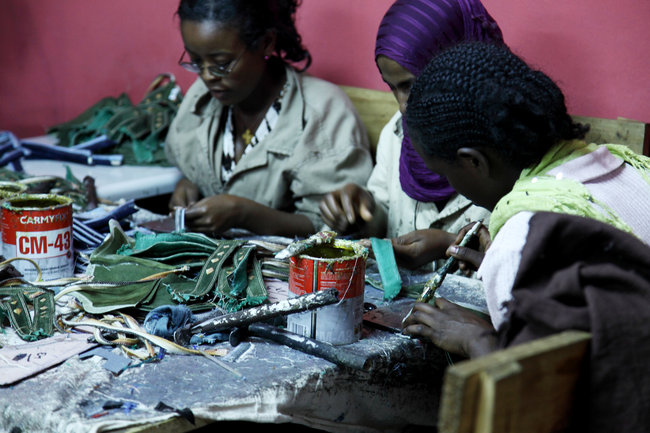 Shoes from SoleRebels sell abroad for at least $60. The company grossed $2 million in sales this past year.

Ms. Tilahun, 33, is one of a cresting wave of African entrepreneurs who are harnessing Africa’s businesses and brands as the continent enjoys its greatest economic success in generations. The International Monetary Fund now forecasts, admittedly in a recession-plagued world, that Africa will have the fastest-growing economy of any continent over the next five years.

Many of the new entrepreneurs of Africa are women.

Ms. Tilahun became one with shoes.

Beginning in 2004 as a recent college graduate in Ethiopia with a handful of artisans from the neighborhood and a workshop on her grandmother’s plot, Ms. Tilahun has built SoleRebels (pun-intended) from a handmade sandal shop into a multimillion-dollar enterprise, whose iconic footwear — still handmade and eco-friendly — sells abroad for $60 and up.

Now her company employs roughly 100 workers, and it recently opened its flagship storein central Addis Ababa, where SoleRebels’ Ethiopian-branded fusion of Abyssinian and Western taste is on display. With each pair of shoes, she said, she seeks to change people’s minds about Africa.

“We’ve flipped the concept of non-Africans writing the script,” Ms. Tilahun went on. “We’ve basically taken back control of our destiny by controlling the marketing message.”

Indeed, Africa may not be as badly off as indexes sometimes imply.

According to a World Bank report released this month, more than 20 sub-Saharan African countries, totaling more than 400 million people, have gained middle-income status.

This year, the World Bank said, one-third of the economies of the 49 sub-Saharan African countries will grow at a clip of 6 percent or more; meanwhile, the number of people living in poverty has fallen roughly 10 percentage points over the past decade.

It has as much, or more, to do with trade as aid. And it is compounding a surge of female entrepreneurs.

“Women in the private sector represent a powerful source of economic growth and opportunity,” said Marcelo Giugale, the World Bank’s director for poverty reduction and economic management for Africa.

“In Africa, you see women working a lot,” noted Markus Goldstein, a development economist in the gender department of the World Bank in Washington. “They are very active in the labor market.” According to World Bank data, nearly two-thirds of women are participating in Africa’s labor force.

Those are all businesses that are seen as more traditional. In 21st-century Africa, businesswomen are pushing into the national scenes of their countries as movers and shakers of industry.

In South Africa, Sibongile Sambo has been a pioneer for women in aviation. She leads an exclusive charter-aircraft company. In Kenya, Ory Okello, 23, helped found Ushahidi , a Web 2.0 crowdsourcing software initiative that changed the game in real-time tracking of emergency events via cyberspace. It was originally geared toward political violence after Kenya’s bloody presidential election in 2008, and now is used by Google.

In Nigeria, Adenike Ogunlesi   has built a regional children’s clothing empire from scratch — she started by selling pajamas out of the trunk of her car.

In lakeside Uganda, Lovin Kobusingya has brought fish sausages to the dining table.

“I always knew I was a businesswoman,” said Ms. Kobusingye, 29, a mother of two. “When I was in high school, I used to sell illegal sweets. And I made money. I made a lot of money.”

“I am very happy and proud” at being a female entrepreneur, she said. “When I was young, they said: ‘A woman is a woman — a man should take care of you.”’

“But women are actually contributing a lot more than men. We always find ourselves multitasking,” she said, between working and raising a family. “If it could be equated in terms of currency, it would be 80 percent of the economy.”

The rate of female entrepreneurship is higher in Africa than in any other region of the world, the World Bank says. And even African countries criticized for abuses of human rights and civil liberties are progressive on gender.

It may not be a coincidence that a number of Africa’s economies doing the best without many resources — like Ethiopia or Rwanda — have austere, orderly, patriotic, aid-efficient governments that simultaneously spurn charity aid and focus on foreign-direct investment and private enterprise.

In Rwanda, a change in land-title laws to allow wives to be registered alongside their husbands led to a nearly 20 percent increase in female-registered farms.

Both Ethiopia and Rwanda have been criticized for restrictions on civil liberties yet have also given birth to targeted marketing of U.S. consumers — including Rwanda’s Bourbon coffee chain and Ms. Tilahun’s SoleRebels — efforts that may help alter Africa’s image.

“As I entered college,” Ms. Tilahun noted, “it had become clear to me that ‘poverty alleviation’ is a myth.”

“People don’t want to be ‘not poor,’ they want some form of prosperity. That doesn’t mean millionaires or billionaires, but prosperous,” Ms. Tilahun said. “And to create prosperity you have to create something world class.”

She started with the basics — fibers. These have been part of survival and ingenuity in Ethiopia — along with China, India and Egypt, one of the world’s most ancient civilizations. “Footwear was an excellent platform,” she said. SoleRebels footwear — including shoes, sandals and slippers — is made from a variety of hand-woven, locally made materials, including recycled car tires and traditionally grown koba fiber.

Over the years, her company used new thread types and weave designs, revamping customer service to incorporate Ethiopia’s culture of hospitality. As a woman growing up and working in Ethiopia, she said, there were people who tried to limit her because of her gender, “but I never felt any limitations.”

Moreover, she felt that she was doing something genuine — “people want their brands to be real,” she said.

As her shoes have caught on, so has an image of Africa that consumers are willing to buy, and not simply fund.

SoleRebels has become one of Africa’s best-known shoe companies, its products advertised in hip magazines from Toronto to Berlin. Consumers and investors from donor-aid nations have responded. Ms. Tilahun was named by Forbes magazine as one of 100 women to watch in 2012 and invited to speak at the 2011 World Economic Forum.

There is an “urgent need,” she said, to create more African-owned brands delivering world-class products to the global market, to drown out charitable organizations “selling their variety of messages about and images of Africa.”

“Let’s face it,” she said, “it’s pretty hard to convince someone to buy what you are selling when someone else has convinced them you are solely occupied with swatting away flies from your face.”