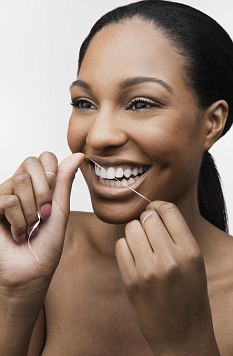 Floss: The link between poor oral health and dementia was far more pronounced in women than in men

People who keep their teeth and gums healthy with regular brushing may have a lower risk of developing dementia later in life, according to a U.S. study.

Researchers at the University of California who followed nearly 5,500 elderly people over an 18-year-period found that those who reported brushing their teeth less than once a day were up to 65 percent more likely to develop dementia than those who brushed at least once daily.

Inflammation stoked by gum disease-related bacteria is implicated in a host of conditions including heart disease, stroke and diabetes.

Some studies have also found that people with Alzheimer’s disease, the most common form of dementia, have more gum disease-related bacteria in their brains than a person without Alzheimer’s, Paganini-Hill said.

It’s thought that gum disease bacteria might get into the brain, causing inflammation and brain damage, she said.

Paganini-Hill and her team followed 5,468 residents of a Californian retirement community from 1992 to 2010. Most people in the study, published in the Journal of the American Geriatrics Society, were well-educated and relatively affluent.

When the study began, participants ranged in age from 52 to 105, with an average age of 81.

All were free of dementia at the outset, when they answered questions about their dental health habits, the condition of their teeth and whether they wore dentures.

When the researchers followed up 18 years later, they used interviews, medical records and in some cases death certificates to determine that 1,145 of the original group had been diagnosed with dementia.

They found those who reported not brushing their teeth every day had a 22 per cent to 65 per cent greater risk of dementia than those who brushed three times daily.

Paganini-Hill could only speculate on the reasons for the different outcomes among men and women. Perhaps women wear their dentures more often than men and visit the dentist more frequently.

The study has limitation. Paganini-Hill and her team looked at behavior and tooth numbers as a kind of proxy for oral health and gum disease and didn’t carry out any dental exams. While neglecting teeth might be a sign of early vulnerability to dementia, some other factor be having an impact too.

Head injury and malnutrition are also important causes of tooth loss in adults, and either of those might increase the dementia risk, said Amber Watts, who studies dementia at the University of Kansas and wasn’t part of the study.

‘I would be reluctant to draw the conclusion that brushing your teeth would definitely prevent you from getting Alzheimer’s disease,’ she said.

Violence in Chicago The Interrupters Pt.1