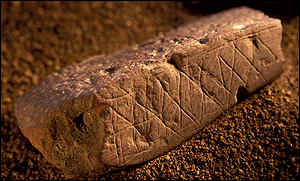 Are abstract markings on a piece of ochre ancient art?
The world’s oldest example of abstract art, dating back more than 70,000 years, has been found in a cave in South Africa.

Scientists say the discovery shows that modern ways of thinking developed far earlier than we think.
The abstract art was found on two pieces of ochre in a cave on the southern Cape shore of the Indian Ocean.
Previously, the earliest evidence of abstract art came mainly in France from the Eurasian Palaeolithic period less than 35,000 years ago.
Complex motif
Dr Christopher Henshilwood, from the State University of New York at Stony Brook, says: “They may have been constructed with symbolic intent, the meaning of which is now unknown.

“The engraving itself is quite a complex geometric pattern. There is a system to the patterns.”
“We don’t know what they mean, but they are symbols that I think could have been interpreted by those people as having meaning that would have been understood by others.”
The engraved ochre pieces were recovered from Middle Stone Age layers at Blombos Cave, 290 kilometres (180 miles) east of Cape Town, and are at least 70,000 years old.
Dr Henshilwood says more than 8,000 other pieces of ochre were found in the cave, many of which had been rubbed smooth as if to make pigment powder.

Some say they could be just meaningless doodles?

Ochre, a form of iron ore, is frequently found in Stone Age deposits less than 100,000 years old. It may have been used as a body or decorative paint.The researchers believe that the ochre was first scraped and ground to create flat surfaces. It was then marked with cross hatches and lines to create a complex motif.
The find pushes back by some 35,000 years the earliest time when biologically modern humans were known to have developed modern behaviour.
“The theory up until now has been that modern human behaviour started only around 40,000 years ago,” says Dr Henshilwood.
“The whole of South Africa was occupied by a biologically modern people who had evolved about 150,000 years ago.

“There is no doubt that the people in southern Africa were behaviourally modern 70,000 years ago.”
‘Just doodlings’
Scientists believe that these finds demonstrate that ochre use in the Middle Stone Age was not exclusively utilitarian and, arguably, the transmission and sharing of the meaning of the engravings relied on fully syntactical language.
While the markings are suggestive, not all scientists are prepared to classify them as a form of artistic expression and abstract thought.
Steve Kuhn of the University of Arizona says the finding is the result of some “very good work by some very serious researchers”.
But he adds: “I’d be more comfortable if there were more of these engraved stones; if these alleged symbols were found many times in different places. It is possible they were just doodlings that really didn’t mean anything.” 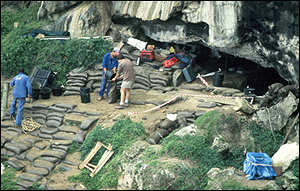 The research was funded by the US National Science Foundation and is published in the journal Science.