They were just two young men out to watch a match on TV over a beer. Yet the moment they walked through the bar door eyes narrowed and jaws dropped.

When they asked for a menu, they were told the kitchen had ‘just closed’; their drinks took an eternity to arrive, and were served as if they were lepers; and when their backs were turned, two men feigned to strike them with their billiards cues.

Ordinarily, visitors are welcomed warmly in Your Sports Bar in the mining city of Donetsk, Ukraine, particularly if they are English. 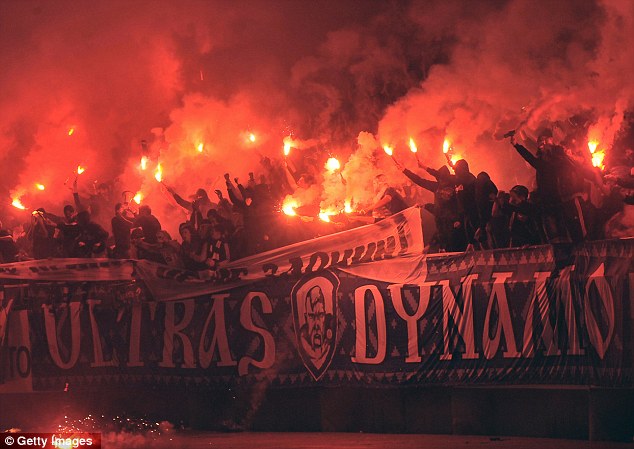 Thugs: Ukranian hooligans at a match between Dynamo Kiev and Shaktar Donetsk in 2011

Its walls are adorned with the scarves of Premier League teams and a huge flag of St George is pinned to the ceiling.

Though Innocent Uche, 23, wore an England shirt with a Three Lions badge, and his friend Kelvin Obi, 20, is an ardent anglophile, there was one big problem. They are Nigerian — and black.

Donetsk is the venue for two of England’s three group matches in the forthcoming European football championship.

The families of two young black players, Theo Walcott and Alex Oxlade-Chamberlain, have sparked controversy by opting to stay at home because they fear being targeted by Ukrainian racists.

To gauge the reception they might have received, I accompanied the two black students on a rare night out. Judging by the sickening way they were treated, the players’ relatives made the right decision.

The barman, Volodya, was particularly incensed that the aptly named Innocent was with his Ukrainian girlfriend, Maria, a pretty 25-year-old architect, and one of few local women sufficiently enlightened — and brave enough — to go out with an African.

‘If that slut was a relative of mine, I would never speak to her again,’ snarled the shaven-headed 21-year-old, until recently a member of the notorious Ultras hooligan group that follows the Shakhtar Donetsk team.

‘How can it be love when they are from such different worlds? He must have money. Our girls only go out with these types for what they can get.’ 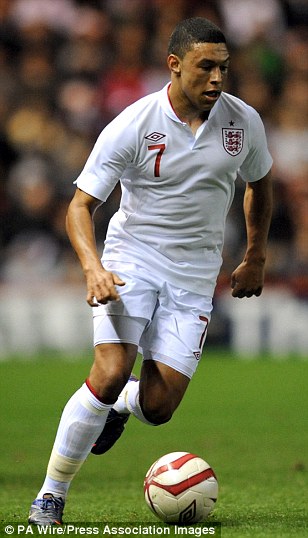 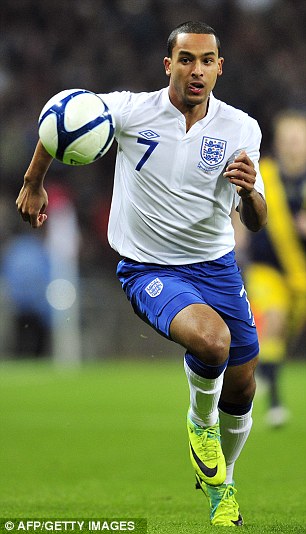 Fears: The families of two young black players Alex Oxlade-Chamberlain (left) and Theo Walcott have sparked controversy by opting to stay at home because they fear being targeted by Ukrainian racists

Yet it hardly seemed worth informing him that Innocent comes from a modest background and he has risked life and limb to study economics in Ukraine only because, at £1,000 a year, its university fees are far cheaper than those in Western Europe.

Talking to the people of Donetsk — where England play their opening match against France on June 11 and later meet the hosts, Ukraine — you soon realise the pointlessness of questioning the endemic bigotry that mars this otherwise engaging industrial city.

Anyone with even moderately dark skin runs a gauntlet of suspicious looks, insults, threats and physical hostility, with the most visceral loathing reserved for blacks and Asians.

Crude jokes are cracked openly, even in supposedly well-educated circles; when black people apply for even the most menial jobs they have been told the positions have been ‘taken’; and black footballers in the Ukrainian Premier League must inure themselves to monkey noises and banana-throwing.

Despite the Ukrainian government’s efforts to play down the England players’ fears — and those of former captain Sol Campbell, who this week warned fans to boycott the tournament ‘or risk coming home in a coffin’ — they know nothing is likely to change.

How can it when the nation’s football authorities turn a blind eye to the racial assaults, Nazi salutes and swastika banners that are a weekly feature of domestic matches?

And when Oleg Blokhin, their coach for Euro 2012 — a tournament President Viktor Yanukovych promised would ‘symbolise progress’ — is an unreconstructed bigot whose racist rants would see him banished from the game in England. 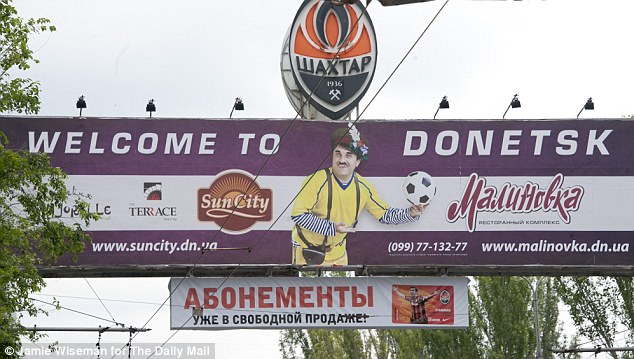 Venue: England play two of their three first round matches of the Euro 2012 tournament in the mining city of Donetsk

His compatriots, he said, should learn the game by watching home-grown stars (such as himself) ‘and not from some zumba-bumba whom they took off a tree, gave him two bananas and now he’s playing in the Ukrainian league.’

Similarly worrying cases are catalogued in a recent Amnesty International report — and the perpetrators are not always drunken skinheads; they are members of the Ukrainian police force.

Max Tucker, Amnesty’s Ukraine campaigner, urges any England fans — white or black — who find themselves in difficulty during Euro 2012 to ‘avoid going to the police at all costs’.

The infamy of the brutal and corrupt thugs within police ranks is growing by the month.

Though Ukraine’s foreign minister has dismissed Sol Campbell’s prognosis as ‘invented and mythical’, and the government is producing statistics designed to prove its inclusivity and tolerance — Ukraine’s 45 million population includes 134 separate nationalities, we are told — it seems he wasn’t being unduly alarmist.

After a few days here you cease to question if Ukraine is brutally xenophobic, and start to ask why?

According to my interpreter, a 26-year-old Ukrainian woman whose parents — university-educated engineers — resorted to the language of the jungle a few years ago when she dated an African student, the reasons lie in its bloody, turbulent history.

Having been conquered down the centuries and seen five million massacred in Stalin’s purges, she says, Ukrainian schoolchildren  are ‘brainwashed’ with a fiercely insular nationalism. 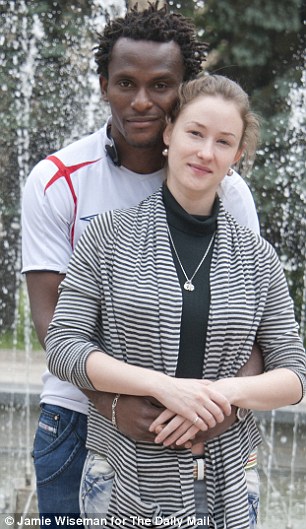 Abuse: Derick Cent and his Ukranian girlfriend Marie are regularly subjected to racism in Donetsk

Since they have survived every adversity, she says, they are also imbued with a false sense of superiority that is reinforced in revised history textbooks, at militaristic youth clubs and summer camps, and in patriotic songs.

If we believe the romanticised propaganda spouted by fanatics, their fighting traditions hail from the Cossacks, the fierce Slavic fighters who roamed this land more than 500 years ago.

‘We are the Cossacks’ successors,’ boasted Stepan Holovko, a 21-year-old history undergraduate who serves on the national council of Patriot of Ukraine, a shadowy paramilitary organisation.

He was explaining a recent video that showed balaclava-clad followers being taught knife-fighting and unarmed combat at a secret woodland training camp.

Patriot followers are known to agitate and recruit members at Ukraine’s football grounds, but he said a police presence would make hooliganism at Euro 2012 stadiums difficult, and fighting would take place elsewhere.

Another dubious character I met was Tolik Egorov, 20, a hulking, tattooed ambulance driver caught on an undercover film made by Sky TV reporters.

In one chilling scene he was shown leading the Ultras into a savage, pre-arranged battle with rivals.

He made gas chamber hissing noises and gave a Nazi salute when discussing ‘Yiddish’ Spurs fans, but now aims to sue the TV channel for libel.

Our interview was part of a PR offensive to clean up his image, but he couldn’t resist complaining about black students in Donetsk and making other disparaging remarks about immigrants.

He also made it clear he would fight during Euro 2012 if the occasion demanded it.

‘If England fans come here and disrespect my country by, for instance, trampling on the Ukraine flag, then of course I will defend our honour,’ he said.

Egorov, who models himself on English thugs glamorised in films such as Football Factory and Green Street, doesn’t deny that he and his fellow Ultras relish violence.

But he said: ‘For us it’s a sport. No weapons are allowed, no one gets badly hurt. Afterwards we shake hands and have a drink together.’

It says much about Ukrainian attitudes that when I met Roman Romanov, the police chief responsible for visiting fans, he sprang to the gang leader’s defence.

‘I’ve seen the video and spoken to Tolik,’ he told me. ‘It was just a misunderstanding. There is no problem with racist football fans here. We have many foreign students and they often go to the football. No one attacks them.’

Innocent Uche would beg to differ. The last time he attended a match, he and three friends were spat on and pelted with bottles.

He now watches football on the internet, in the sanctuary of his dormitory, venturing out in the evening only to attend training sessions with the amateur team he plays for.

On the bus journey he is often taunted and threatened.
During the five years since UEFA voted to stage the championships in Ukraine and Poland, many have questioned the wisdom of their decision.

Leaving aside the possible danger to black fans, you understand why.
Here MPs brawl in parliament, sex trafficking has reached epidemic proportions, and  bribery and corruption poison not only private business but every public service.

Its infrastructure is shambolic: witness the unfinished roads and airports, and the new campsite five miles outside Donetsk that will supposedly provide 3,000 fans from England and Sweden with affordable accommodation.

It has been advertised with eating areas, bars, free wi-fi and even an artificial beach and swimming pool.

But this week it was a weed-strewn building site with hole-in-the floor toilets. Watching a band of Ukrainian bricklayers idle through their shift, it seemed unlikely to be finished by the opening game.

For these reasons, and many others besides, Euro 2012 is surely the most apprehensively anticipated football tournament in history.

I doubt anyone will go home from Ukraine in a casket, as Sol Campbell fears.

But if I were writing a postcard to the Walcotts and Oxlade-Chamberlains, or any English fans pondering travelling to Ukraine next week, the very last thing it would say is Wish You Were Here.

Refereeing the Players, and Racism