DAYTONA BEACH, Fla. — It was crunch time last Sunday in the last round of the L.P.G.A.’s final qualifying tournament, and history and milestones were not the top priority for two young golfers trying to earn playing status for the 2013 tour.
Shasta Averyhardt and Ginger Howard knew what was at stake if they played well enough to earn a tour card in the 90-hole tournament. Averyhardt and Howard, among the few black women in professional golf, were also aware that others were watching.
When she earned her tour card for the 2011 season, Averyhardt became the fourth black player in L.P.G.A. history. She tried to play down her achievement while showing appreciation for the many fans who came to see her play.
Financial struggles and injuries left her wondering if she could pursue her dream, but Averyhardt said her hope was restored by the minority youths who looked up to her during junior clinics and pro-ams.
“Typically, people who come from small towns or urban areas want to get out, or they want to do something great for their lives or for their families,” said Averyhardt, a 26-year-old from Flint, Mich., whose mother is Mexican and father is African-American. “I feel like I can be a testament to that.” 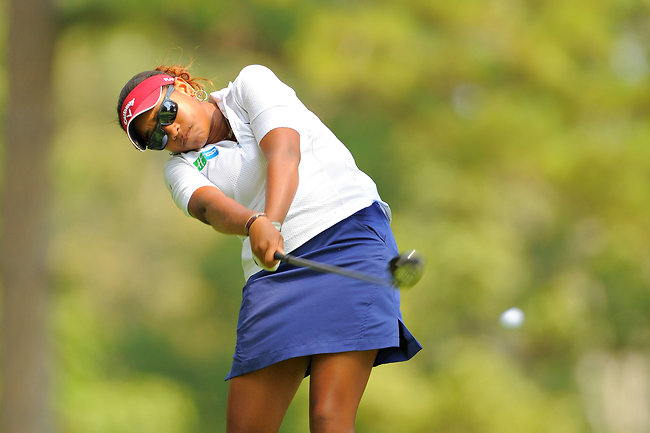 Howard, an 18-year-old rookie, also hopes to encourage young players. Her younger sister Robbi has emerged as a top junior player, and Howard wondered if they could do for women’s golf what the Williams sisters have done for women’s tennis.
“I don’t really look at color, but a lot of people ask about it because I’m one of only a few African-Americans in women’s golf,” said Howard, a Philadelphia native who lives with her parents and three younger siblings in Bradenton, Fla. “I have high expectations because it keeps me driving toward my goals, and I want to try to inspire people.”
Averyhardt lost her L.P.G.A. status last December and returned to Q-School this year hoping to regain her tour card. Howard did not earn L.P.G.A. membership last December and aimed to qualify after playing a full 2012 season on the L.P.G.A’s development circuit, the Symetra Tour.
Among those monitoring their progress is Sisters Across America, a nonprofit organization that was founded in 2006 to mentor young minority women seeking to play professional golf. 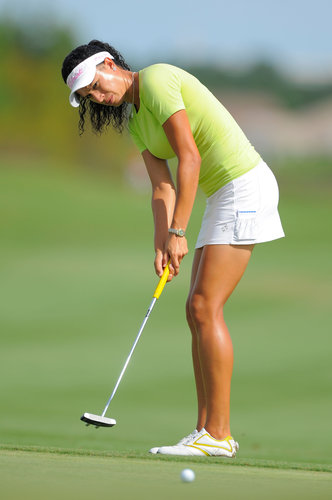 Averyhardt, who began playing the game when she was 10, was the first golfer sponsored by the group, which helped pay her tour expenses and tournament entry fees from March 2009 through July. She has aged out of the program, but Howard became eligible when she turned 18 and will receive support from Sisters Across America next season.
“Ever since we started supporting Shasta, I wanted to provide the mentoring, financial support or whatever she needs to play on the L.P.G.A. Tour,” said Deloris Jones, the organization’s president. “The same is true with Ginger.”
The organization holds two tournaments each year to raise money for the sponsorship program. It also hopes to attract sponsors to help cover expenses incurred by program participants. With corporate support, the group could provide up to $80,000 per player each year, Jones said.
The organization also functions as a nationwide network. Whenever Averyhardt was traveling and playing tournaments, the group would ask members in the area to provide support, housing and transportation. Without the support of Sisters Across America, Averyhardt said, she would not have been able to begin her professional golf career.
Averyhardt and Howard took different paths to the final qualifying tournament. Averyhardt, who earned an accounting degree from Jackson State in 2008, struggled as an L.P.G.A. rookie in 2011. Without full status, she bounced between the Symetra and L.P.G.A. tours. She missed cuts and produced spotty performances.
Just as Averyhardt gained L.P.G.A. membership, tendinitis flared in her left wrist, a result of swing changes. Her new swing placed pressure on her slender 6-foot-1-inch frame and weak upper body.
“It was very painful, but I felt obligated to play,” Averyhardt said. “I should have taken medical leave, but I felt like I was playing for a lot of other people.”
Averyhardt rested and rehabilitated her wrist last winter, and in 2012 she had her best season, with a tie for fourth and four top-25 finishes on the Symetra Tour. She earned $14,362 in 15 events and was named the tour’s most improved player. She also ranked third in driving distance with an average of 268 yards and finished sixth in birdies with 132 for the season.
“This was a rebuilding year in which I had to reassess why I’m playing,” Averyhardt said. “I put so much pressure on myself to play well and to play for other people instead of saying, ‘I love this sport, I’m good at it and I’m playing for me.’ ”
Howard, who began playing golf at age 6 and graduated from home schooling in May, skipped college to take a quicker path to the L.P.G.A. She played in 16 Symetra tournaments this year with her father, Robert, as her chaperon and caddie. For many of those events, her 4-year-old brother, Julian, also traveled with them. It was not always optimal for Howard to learn to play week after week of tournament golf with a little brother in tow.
“He slept O.K., but he’s not very good at watching me play during the tournaments,” Howard said.
She arrived on the Symetra Tour with solid amateur credentials, as a member of the Junior Ryder Cup and Canon Cup East teams in 2010. After turning professional, she won eight tournaments in 2011 on a Florida minitour. She was also the medalist in last year’s sectional tournament at the L.P.G.A. Q-School.
Howard’s best Symetra Tour finish this year was a tie for second at the Riviera Nayarit Classic in April. But then she missed five tournament cuts as she wrestled with the learning curve and experimental equipment.
“It was my first time on a real golf tour and it was a great experience,” said Howard, who earned $16,863 in 16 events and led the Symetra Tour with a putting average of 29.19 strokes per round. “I feel like I got a lot stronger mentally and physically this year.”
The top 40 finishers at the qualifying tournament earned tour cards. Averyhardt squeezed in as she tied for 39th. She posted a final-round score of three-under-par 69; on the last hole, her chip shot rolled 25 feet downhill and fell into the cup for a birdie.
“I told my caddie after the third round that I was not leaving here without some kind of L.P.G.A. status,” said Averyhardt, a fourth-year pro. “But I didn’t know that I had to birdie the last hole to get my card.”
Averyhardt hopes to find sponsorship that will enable her to play in the L.P.G.A.’s Monday qualifying tournaments each week. Once again, she will split her time between the L.P.G.A. and Symetra tours, but she will focus on reaching the highest level and staying there.
Howard missed earning her tour card by eight strokes. Now her goal is to finish among the top 10 on the Symetra Tour’s money list to earn full membership on the L.P.G.A. Tour for 2014.
“Unfortunately, I’ll be back on the Symetra Tour next year,” she said. “But fortunately, I learned a lot this year that will help in 2013.”
Sisters Across America is hopeful that Averyhardt and Howard can help pave the way for other minority women. Another top black player, Cheyenne Woods, missed advancing to the final round of the qualifying tournament. But as the niece of Tiger Woods, she will probably earn some sponsor exemptions.
“Golf is tough, and neither Shasta nor Ginger played as they had anticipated at this year’s L.P.G.A. Q-School,” said Jones, the Sisters Across America president. “But the fact is, they were there. And that’s where you start.”